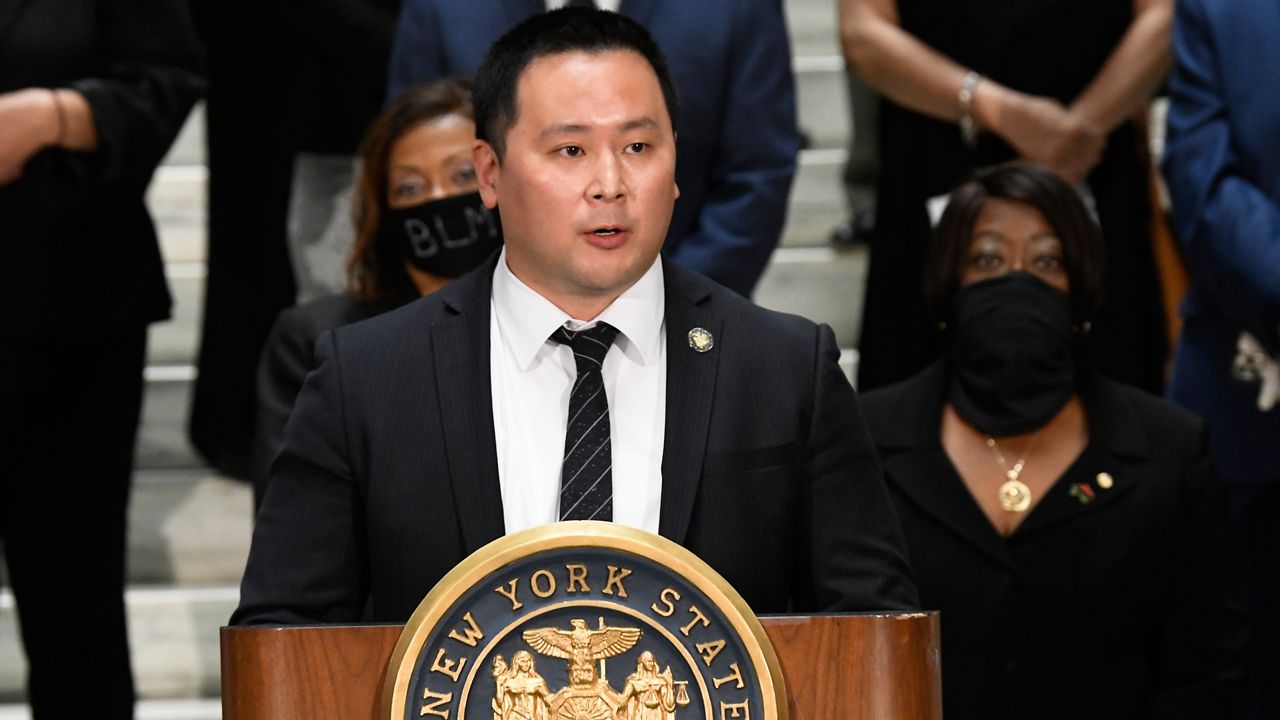 A June 8, 2020, file photo of Queens Assemblyman Ron Kim speaking during a news conference at the state capitol in Albany. Hans Pennink/AP.

‘I Refused to Lie’: Assemblyman Ron Kim Discusses Why He Spoke Out About Cuomo

NEW YORK — Queens Assemblyman Ron Kim says he spoke out about a call with Gov. Andrew Cuomo — in which he claimed the governor threatened him — because he could not lie about the administration’s handling of nursing homes during the pandemic.

“If it was just yelling at me. I think we could have gotten past it, but it was the yelling plus the request to lie about what I heard that ultimately made me speak publicly about it. Because I can’t be an accomplice. I refuse to lie to cover up something that this administration, you know, possibly had broken the law,” Kim said in a Thursday night interview on Inside City Hall.

In interviews this week, Kim has been recalling a phone call he had with Cuomo last week in which he said Cuomo threatened to end his political career. Kim, a fellow Democrat, has been a fierce critic of the governor on nursing homes. Kim lost his uncle, a nursing home resident, to COVID-19 last spring.

This month, officials in the Cuomo administration released new numbers that show they greatly underreported COVID-19 deaths of patients who lived in nursing homes and long-term care facilities. They then refused to release that data to the state legislature, which formally requested it almost six months ago. Melissa DeRosa, a top aide to Cuomo, told legislators that the administration delayed providing them with full nursing home data to comply with a request from the U.S. Department of Justice. DeRosa also said the administration “froze” any release of the statistics out of fear that it could spur a federal investigation.

Kim has accused Cuomo of engaging in a deliberate coverup and said he faced his wrath on the phone call last week.

Cuomo’s anger at Kim spilled into the public Wednesday when the governor spent part of his press briefing alleging Kim acted unethically and possibly illegally in a years-old unrelated matter.

The acrimony was enflamed by Kim’s introduction of legislation to revoke the governor's emergency powers and a letter charging "criminal use of power" by Cuomo.

“Mr. Kim is lying about his conversation with Governor Cuomo Thursday night," Azzopardi said. "I know because I was one of three other people in the room when the phone call occurred. At no time did anyone threaten to 'destroy' anyone with their 'wrath' nor engage in a ‘coverup.'"

The Assemblyman said the tenor of the phone call fit Cuomo’s style, and he claimed that staff members inside the governor’s office have privately reached out to elected officials to thank them for speaking out about “what’s going on in that environment.”

In the NY1 interview Thursday night, Kim also said he was within his right to ask tough questions and wants to make sure the focus stays on nursing home residents.

“We need to get past this. This is really about the 15,000 residents who died in the last eight months and the bad policies that we’ve been trying to repeal so we can be in a better place to protect them,” Kim said. “I am the chair of the Aging Committee. This is my job to investigate and ask tough questions, and I shouldn’t be punished or threatened for doing my job.”

This story includes reporting from Emily Ngo and Zack Fink.