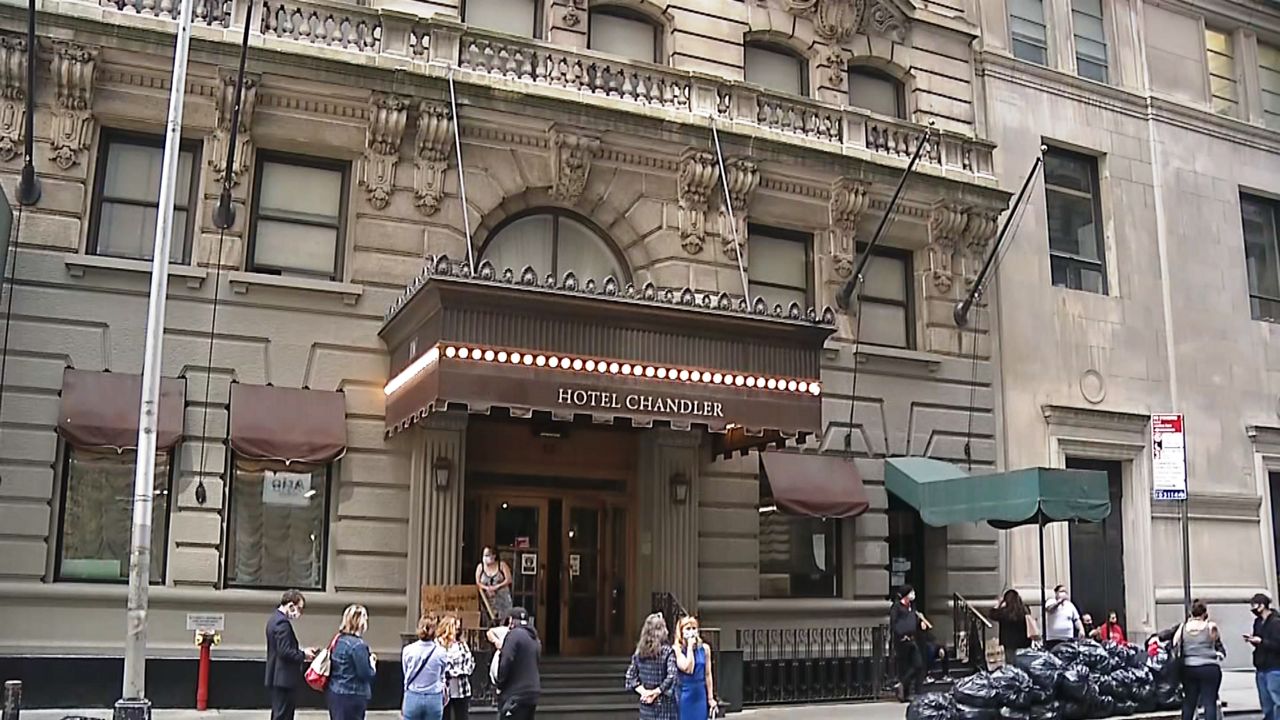 Families at Midtown Shelter Won't Be Moved After Settlement Reached

NEW YORK — The plan to move homeless men staying at the Lucerne Hotel on the Upper West Side to the Harmonia shelter in Midtown will no longer go through after a deal was reached Friday.

It’s been a long few weeks for the Bonanos.

“It’s basically, we feel like chess pieces being bounced around and bounced around,” Michael Bonano told NY1 outside of the Harmonia Shelter on 31st Street.

Michael and his wife, Dawn Bonano, were one of about 150 families facing an uncertain future. Weeks ago, the mayor had threatened to move them out of their Midtown shelter to make way for hundreds of homeless men from a hotel on the Upper West Side.

“It’s very stressful,” Michael said. "I am living day by day, not knowing when they are going to knock on my door and give me another letter of transfer saying, ‘Hey, you got a couple of hours to pack up and you have to go on the bus.'”

On Friday, that plan was abruptly tossed out. The de Blasio administration announced it would keep these families in their Midtown homeless shelter, hours after those families rallied outside.

But the mayor will move abut 240 homeless men from a hotel on the Upper West Side. The men staying at the Lucerne Hotel on 79th Street will move to a Radisson Hotel in lower Manhattan. That hotel will eventually be turned into a permanent homeless shelter.

The decision comes after weeks of controversy.

Earlier this month, the mayor abruptly decided to move men out of the Lucerne after Upper West Side residents threatened to sue. Those residents hired an attorney, a former deputy mayor under Rudy Giuliani.

But that decision faced an immediate backlash, trickling into other neighborhoods where homeless families would be displaced to make way for these homeless men.

The councilwoman for the Upper West Side told us Friday she was disappointed with the mayor’s final decision.

“What we have seen on the Upper West Side is things have settled down. We have resolved many of the issues,” said Councilwoman Helen Rosenthal. "These are real things that are happening to peoples' lives. You can’t play chess with them.”

As a result of the earlier reshuffling, homeless residents in two other shelters were slated to move. The city has now backed away from that decision as well. Families at the Flatlands Family Residence will stay put for now, and so will homeless women who are staying at a Long Island City hotel.

The Flatlands Family Residence, which now houses homeless families, will eventually be converted to a shelter for single adults. It’s unclear when that transition might occur. It’s unlikely to happen this year.

While some shuffling around is happening, the city is not backing away from its policy to house people experiencing homelessness in hotels during the coronavirus pandemic. Officials continue to say they will not move homeless men and women back into crowded, dorm-like shelters until it is safe to do so.