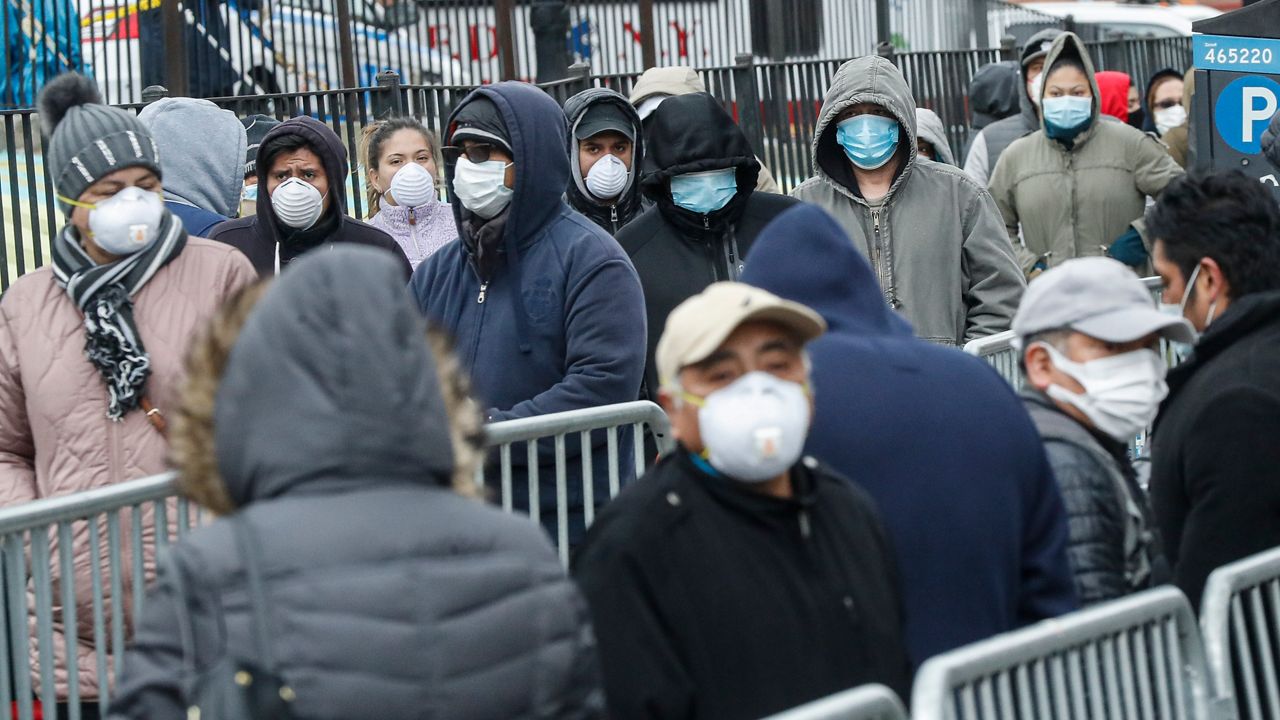 A March 25, 2020, file photo of people waiting on line for a COVID-19 test at Elmhurst Hospital Center in Queens. John Minchillo/AP.

NEW YORK — The city's health department estimates 2 to 3 million people in New York have already been exposed to COVID-19, according to Mayor Bill de Blasio, who says the department is ready to administer the vaccine when it’s ready.

In his weekly “Mondays with the Mayor” interview with NY1’s Bobby Cuza on Inside City Hall, de Blasio didn’t provide further details and evidence on how the health department reached the 2 to 3 million estimate, but experts agree that the number of reported COVID-19 cases in the country and across the world is very likely an undercount since not every person gets tested, or because people have been incorrectly diagnosed with an illness with symptoms similar to COVID-19.

Getting Ready to Administer the Vaccine

For his part, de Blasio says the city is ready whenever a vaccine is given the green light.

“Our health department is ready to start vaccinating people immediately. The facilities are already in place, the refrigeration. They’re ready,” de Blasio said. “So as soon as we get it in quantities, that’s when things start to change.”

A few weeks ago, however, Cuomo said it will be up to the state, not the city, to administer the distribution of the vaccine.

Like most elected officials, de Blasio cited the need for a vaccine to get the five boroughs somewhat back to normal, although he claimed the city’s Test & Trace Corps, with its arsenal of over 4,000 employees, could still stem the worst effects of a second wave of the coronavirus. Despite concerns that the virus has spread too much in city communities to rely on contact tracing anymore, the mayor argued otherwise. His counterargument: he claims the city has found that most people who test positive for COVID-19 don’t have many close contacts.

“They have one person, two people, three people — it’s not like a vast number, because the close contact standard requires some actual close contact and for a meaningful amount of time,” the mayor said. “So we’ve actually found that Test & Trace can keep up with a high volume of cases.”

The basic reproduction number, which represents the number of infections caused by a single infection of a given disease, can vary depending on where someone lives, but experts warn that an infected individual can spread the virus to far more people if they and the people they infect do not all wear face coverings and social distance.

In his interview with NY1, the mayor also confirmed he took his furlough in October, losing a week of pay.

“A lot of the other team here at City Hall has either done it already or is in the process of doing it,” he said. “We had to lead by example.”

In September, the mayor said he and 495 staff members would forgo pay for a week's furlough at some point after October 1, saving, in combination with earlier cuts, about 12% from the mayor's office budget.

The furlough comes as the city faces a budget deficit estimated to be around $9 billion. For now, the city has avoided layoffs, but the mayor in his interview said they would come up “at some point next year” if no coronavirus stimulus package is passed in Washington D.C.

That could face roadblocks in the U.S. Senate. Republicans in the Senate, led by Majority Leader Mitch McConnell, have frequently blocked House Democrats’ efforts to pass another coronavirus relief package. One of the sticking points has been how much direct aid should be given to states and cities, with Democrats wanting the federal government to give far more money to localities. While the House and Senate were able to hammer out stimulus bills earlier in the year, Democrats may need control of the Senate to get the aid localities like New York want.