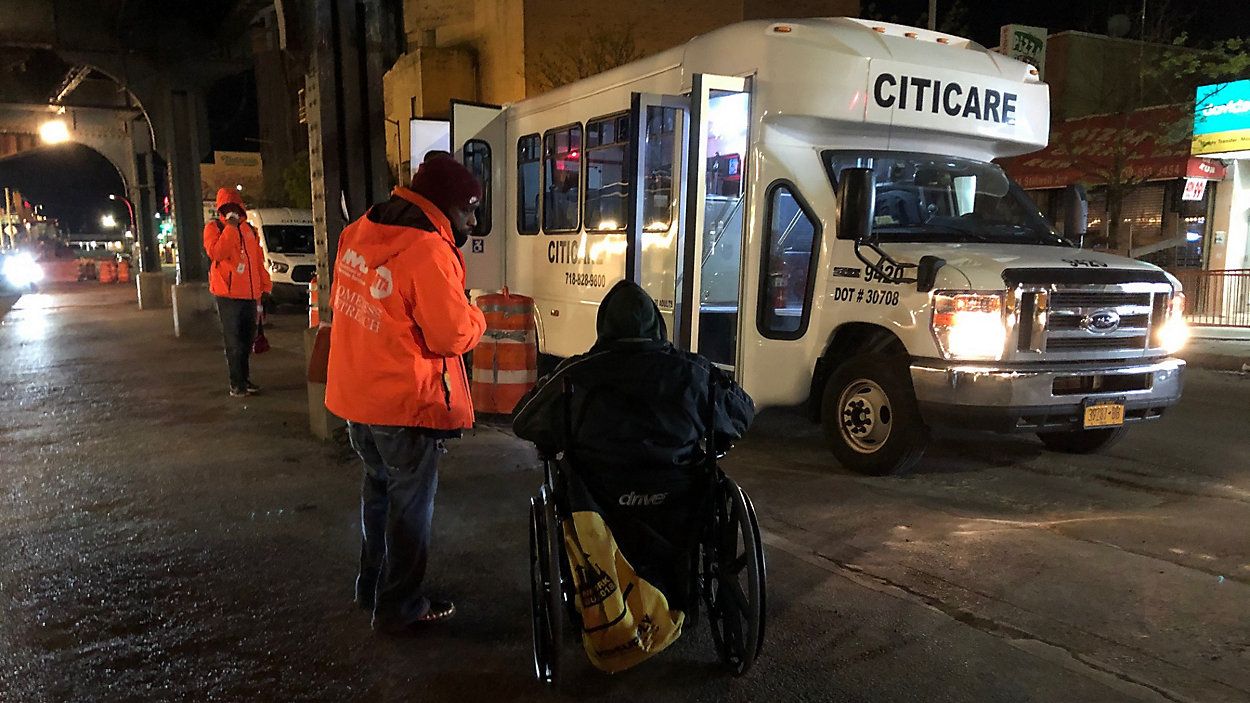 Just after midnight, an entire transit system is winding down.

A train ride to some, it’s called home to others. In an hour, it will close.

The unprecedented move to shut down the subway for overnight cleaning is thrusting hundreds of the city’s homeless population into the streets. Just last week, the city quickly set up a system to try to bring people inside, into a shelter.

We were at the end of the line — in this case, it’s Coney Island and the F and Q trains. As the last trains roll in, outreach workers and hoards of police officers try to convince men to go inside. Buses wait in the street below. Some take them up on the offer.

Homeless man: I do often fall asleep on the subway, yes.

Gross: And now you are going to get on a bus?

Homeless man: Yes, I am.

“Last night I slept on the floor in the shelter because they said they had no beds,” a homeless man named Peter said. “They kicked me out of here to go sleep on the floor."

“You think it would be wise to be packed up with the corona system going on right now in the shelter system? Laying in rows of beds of people?” a homeless man named Anthony said. “That wouldn’t even make sense."

Anthony walks off into the night. It’s unclear where or if he slept.

For hours the homeless pour out of the station. Some just wait outside. With the train shuttered and no other options, some start boarding the bus to shelter. Just after 2 a.m. it leaves, traveling about 20 miles to Manhattan.

The bus arrives at city’s massive intake shelter for homeless men, a multi-level dorm where men start the process of entering the shelter system. Bus after bus after bus rolls through.

The city said 362 people from the subway interacted with outreach services on this particular night. 211 of them accepted services, the city claimed, while 178 went to homeless shelters and 33 went to the hospital

“I would tell you when you have had this many people accept engagement and come in for anything, this is a victory unto itself,” Mayor Bill de Blasio said at a press conference. “Over time we are going to be able to see how many of those people stick, in the sense of staying in.  And that’s going to tell us a lot more. But even this level of engagement is really positive as a beginning."

“The homeless outreach people that wear the orange jackets — all I heard them say was, ‘We are going to take him to 30th Street.’ Take a look inside. If you don’t catch corona and drop dead from disgust, I don’t know what will. And here I am,” said a homeless man who came from the 206th Street station. “Unsanitary conditions. There is a line of 15 people before you get processed.”

NY1 has learned the numbers can be deceiving. The city counts someone as "accepted city services" if he or she boards the bus to shelter — even if that person chooses to walk away when they get to the shelter.

We saw men get off the bus only to turn around and walk away. Some told us there was nowhere to sleep inside.

“Tonight I was currently in the facility and they told they don’t have room for me tonight,” one said. “So for me to spend the night, basically on benches.”

In the last several days, Steven Banks, the commissioner for the Department of Homeless Services, said the city was steering people away from the intake facility, perhaps to avoid the crowds, directing them to different shelters from the train platform. He repeated it Tuesday morning.

“In the early days there were some challenges of getting people directly into shelter when they had agreed to get on a bus. We made a change to redirecting the buses to special shelters and not the Bellevue intake center,” Banks said. “That change was made on Friday night. I thought it was an important evaluation of challenges that we had, and we are making changes as we go along.”

Hours earlier we saw that was not necessarily the case.

By the time the last bus was dropping men off at the intake center, it was 4 a.m.. In an hour the subway would reopen.