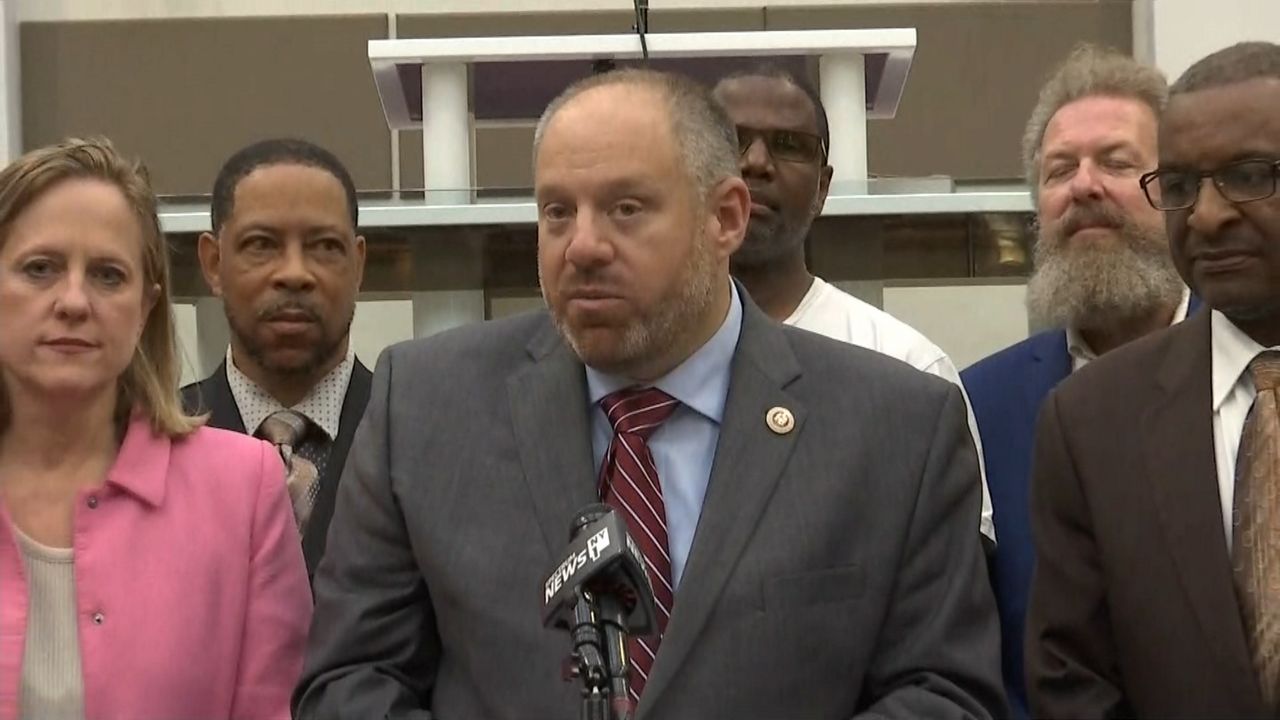 Queens Councilman, Rory Lancman, center, with Borough President Melinda Katz, left, at a news conference in New York on June 21, 2019, announcing he was bowing out of the race for Queens district attorney and endorsing Katz. Gloria Pazmino/NY1.

With just days to go until Queens Democrats choose their nominee for the borough's next top prosecutor, the candidate field is shrinking.

Queens Councilman Rory Lancman announced Friday afternoon that he was bowing out of the race and endorsed Borough President Melinda Katz in the Democratic primary. Lancman will still appear on the ballot because the election is Tuesday.

The move comes after Lancman had been attacking Katz in the past few weeks, such as in our debate June 11.

Queens Borough President @MelindaKatz comes under attack for her stance on cash bail, with @RoryLancman questioning if she's committed.

"The numbers are simply not there for me to win this Tuesday's Democratic primary for district attorney, and I owe it to the voters, and particularly to my supporters, to acknowledge that fact and withdraw from the race," Lancman said at a news conference with Katz announcing his withdrawal and endorsement. "I'm especially concerned about causing a split in the south Queens vote, effectively diluting the voice of the community most impacted by the decisions our next DA must make."

Now @RoryLancman says the @nytimes endorsement of @CabanForQueens kind of sealed the deal for him. He realized then he did not have a chance with a specific section of the vote

“Nobody threatened me,” says @RoryLancman when asked what he’s been promised in return for getting out of the race.

The announcement comes one day after insurgent candidate Tiffany Cabán secured the endorsement of State Sen. James Sanders, who represents some of the same southeast Queens neighborhoods that Katz is hoping to win.

"I think that on Tuesday we may get the word that we have options, that we don’t have to vote for the old, because there is new," Sanders said.

The city's most diverse borough is home to roughly 766,117 active Democrats. Katz's stronghold is expected to be in the southeastern section of the borough, home to African American and older middle-class voters like Bishop Calvin Rice. He says Cabán has a message that isn't resonating with his community.

"They think progressive is to be over the top, too far to the left," said Rice, a bishop at New Jerusalem Worship Center. "Weed someone who is in the middle of the road but fair."

"If people haven't figured out that the normal rules of politics have changed, they haven't been paying attention," said the Senate deputy majority leader. "Walking the streets I live on, you feel the energy, you see the attention to this issue."

Cabán has earned several other high-profile endorsements in the past month.

KATZ: NOT WORRIED ABOUT WHERE THE RACE STANDS

However, Katz said she was not concerned about her standing in the race.

"I believe the momentum of this race is going towards us. It's going towards the individual who has spent their life serving the borough of Queens," Katz said at the announcement. "Every single day, we get hundreds of more volunteers, especially in the last week, that have come aboard this campaign; thousands of more people who are interested in having someone who has answered to them in the past be the district attorney."

The Queens DA candidates have been debating how to implement criminal justice reforms becoming popular around the United States, such as ending cash bail and reducing jail populations — and they have debated how far the policies should go.

Katz has been endorsed by several of New York City's most powerful unions, including 32BJ SEIU, the United Federation of Teachers (UFT), and 1199SEIU. 32BJ alone counts 20,000 members in the borough of Queens.

"Melinda has teachers, she has health care workers, she has hotel workers — she has New York City, that's who runs New York City as a whole," Queens Councilman Donovan Richards said. "So when people use the word 'establishment,' I think that they are overplaying their hand to a large degree."

Katz and Cabán are scheduled to hold rallies with supporters this weekend.

Whether big-name endorsements or the power of local unions can help sway the race won't be determined until Primary Day. Six Democrats actively running, including Katz and Cabán, will appear on the primary ballot. Low turnout is expected at the polls. Whoever wins that election Tuesday is expected to win the general election November 5.