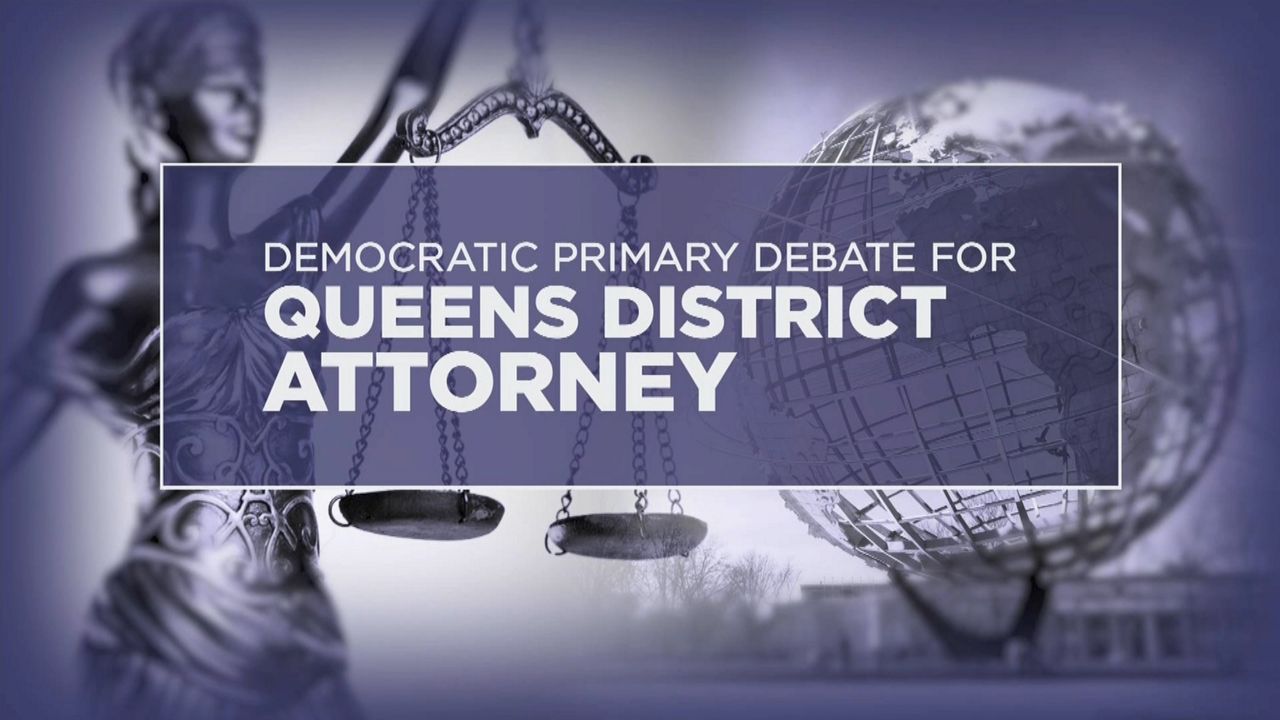 From whether to decriminalize sex work to their commitment to the popular demand to end cash bail, seven Democrats in the primary for Queens district attorney debated on NY1 on Tuesday night, jostling to give the office a new progressive shine and potentially elect the borough's top prosecutor for the first time in about three decades.

All seven candidates who will be on the ballot took the stage for a little over 90 minutes at CUNY TV studios in Midtown, Manhattan, for a debate moderated by NY1 political anchor Errol Louis.

The debate, a chance for candidates to set themselves apart in what's become a very competitive campaign, revolved around criminal justice reforms becoming popular around the United States, such as ending cash bail and reducing jail populations.

"We have again measured success in our district attorneys' offices through numbers of convictions, lengths of sentences, how quickly we can throw people in jail," Public Defender Tiffany Cabán said.

"We need to prevent the injustice of wrongful convictions from ever happening again," said Jose Nieves, a former staffer in the New York attorney general's office.

Former judge Greg Lasak warned of going too far when it comes to justice reform. By law in New York state, starting next year, bail will be eliminated in many cases involving minor crimes.

"I think about 40 percent of the people are going to be released from Rikers Island," Lasak said. "That's two thousand people. Those are not fare beaters, those are not petty thieves; those are criminals."

But, aside from some disagreements on detail, the candidates often agreed on the overall proposals, such as not requiring bail for low-level offenses, establishing a Conviction Integrity Unit, and protecting sex workers from traffickers instead of prosecuting them.

In the Queens North precinct, violent crime has been up this year. Queens Councilman @RoryLancman says part of the problem is that prosecutors and law enforcement spend too much time and resources on low-level, non-violent crimes. WATCH LIVE: https://t.co/l2eQt6DTqJ. #NY1Politics pic.twitter.com/CneFmp1bRl

She says she wants to make sure it isn't driven underground and still end up hurting sex workers. #NY1Politics pic.twitter.com/jMU9XllLaF

Cabán, Borough President Melinda Katz, and Lasak were frequently targeted by their opponents during the cross-examination. Cabán defended her record, saying she had the experience to be a district attorney despite not having been a criminal attorney.

Caban's responds that her experience as a public defender would be crucial as a DA.

Katz, who has been accused of not being committed to progressive criminal justice reforms, defended how she would implement a no-cash-bail system if elected.

Queens Borough President @MelindaKatz comes under attack for her stance on cash bail, with @RoryLancman questioning if she's committed.

And Lasak, a former state Supreme Court judge, contested Katz questioning how many of his convictions had been overturned. He said only a fraction of his cases ever had to be reversed.

Former judge @GregLasak comes under attack from @MelindaKatz, who questions him over some of his convictions overturned while he was a state Supreme Court judge.

Those three candidates, along with former Queens Assistant DA Mina Malik, are towards the top in the money race, according to the latest campaign finance filings.

Contributions to the Queens DA Candidates:

WHAT TO DO ABOUT RIKERS

The candidates also mostly agreed that New York City shouldn't open a new jail in Kew Gardens to replace Rikers Island; Lancman, a councilman in Queens, was the only candidate who fully endorsed the plan to close Rikers and open the new jail.

Where do the Democratic #Queens district attorney candidates stand on the call to replace Rikers with a new jail in Queens and other boroughs?

Cabán has portrayed herself as the most progressive of the seven, while Katz has the support of Gov. Andrew Cuomo.

Candidates were also asked about the murder case of Karina Vetrano, who was found sexually assaulted and dead after going out for a run in Howard Beach in 2016. Chanel Lewis was convicted in a retrial. The case may go to an appeal.

"I think that, originally, he should not have stood trial, because he is mentally ill," said Lugo, a private attorney.

"This is a case that has all the echoes of another Central Park Five case, and I have no problem saying that here and commit to the people of Queens that I will look at this case carefully to make sure that an injustice is not being done," Lancman said.

A PRIMARY ON JUNE 25

Melinda Katz is Soaking Up Endorsements, But That May Not be Enough in the Queens DA Race