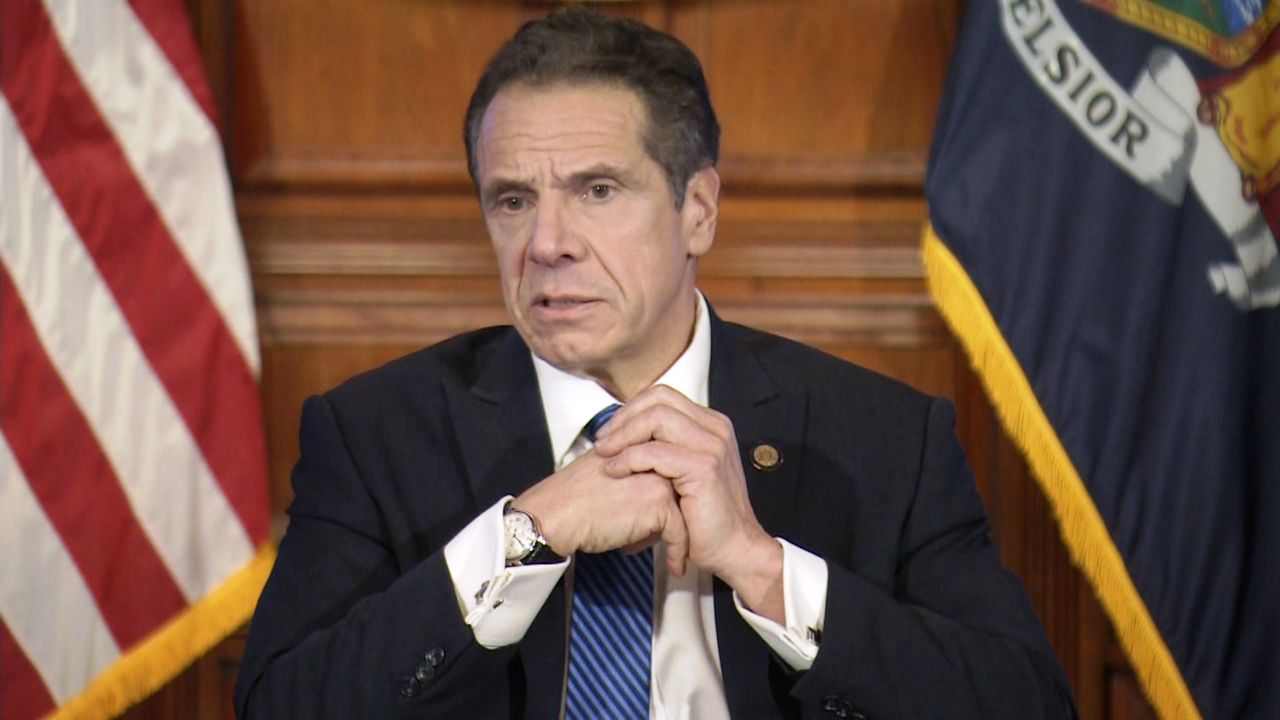 Cuomo: Not Going to Fight With Trump Over Restarting Economy

ALBANY, N.Y. – Gov. Andrew Cuomo on Tuesday said there was a new uptick in the number of coronavirus deaths in New York state, and also had some pointed remarks on the back and forth with President Donald Trump over who can reopen the economy.

“This is no time for politics, and it is no time to fight. I put my hand out in total partnership and cooperation with the president,” Cuomo said. “If he wants a fight, he's not going to get it from me. Period.”

ANOTHER JUMP IN DEATHS

Speaking at his daily coronavirus press briefing in Albany on Tuesday, the governor presented sobering new numbers that showed his own declaration Monday that the worst of the crisis was behind us may have been premature.

The governor said the number of coronavirus-related deaths in New York state increased by 778 Monday, compared to 671 the previous day.

Holding a briefing with updates on #Coronavirus. Watch Live: https://t.co/spHsgMEoTu

The state reported, as of midnight Monday, 202,208 confirmed coronavirus cases.

On Tuesday, New York City health officials released new figures sharply increasing the city’s death toll by 3,778 victims — a massive increase giving New York the most per-capita deaths due to COVID-19 of any city in the world.

Bringing the total number of deaths in NYC to more than 10,000: pic.twitter.com/4ezqe9kBSC

Department of Health officials said the new numbers reflect people suspected of dying from the virus but who didn’t have a test, including people who died at home, in nursing homes and hospitals.

For weeks, the department had been counting the presumed virus deaths based on symptoms and medical history, but only those who tested positive and died of COVID-19 were included in the public count.

The Administration’s of @NYGovCuomo and @NYCMayor say the revised figures will not change the statewide total, since New York State only counts deaths that have been confirmed as #coronavirus https://t.co/nUA6ubaM8m

The governor, meanwhile, says the state has "changed the curve" and is still driving down the hospitalization rate, ICU admissions, and intubations. Still, he noted 1,600 new people went to hospitals on Monday.

Cuomo also provided a breakdown of where hospitalizations for COVID-19 are occurring in New York state, showing a majority are in downstate overall:

The governor also says that the rate of deaths in state nursing homes is higher than in hospitals.

"The worst scenario would be if we did all of this we got that number down, everybody went to extraordinary measures, and then we reopen too early and the numbers go back up," Cuomo said.

‘NO TIME TO FIGHT’

On the economy, Cuomo said he will not engage in a political fight with Trump, but corrected his declaration of “total” authority over states when it comes to reopening.

During his Monday coronavirus task force press briefing, the president said Cuomo wanted "independence," vowing that would not happen.

"This is not about Democrats or Republicans. This is about New York — 10,000 lives," said Cuomo. "Forget the darn politics. Everybody's tired of it."

On Monday, the president and the governor jousted over who has the ultimate authority to keep things shut down in New York.

Cuomo proceeded to do a total of nine TV and radio appearances denouncing the president for what Cuomo said wasa  trampling of the Constitution.

He pointed out that the Constitution lays out a system of federalism, balancing power between the federal and state governments, and that he would not be pressured to reopen the economy if he didn’t think it was safe.

“The federal government does not have absolute power. It says the exact opposite of that the president said. It says that would be a king,” Cuomo said on CNN’s “New Day.” “We didn’t have King George Washington, we don’t have King Trump; we have President Trump.”

This story includes reporting from Zack Fink and Gloria Pazmino.