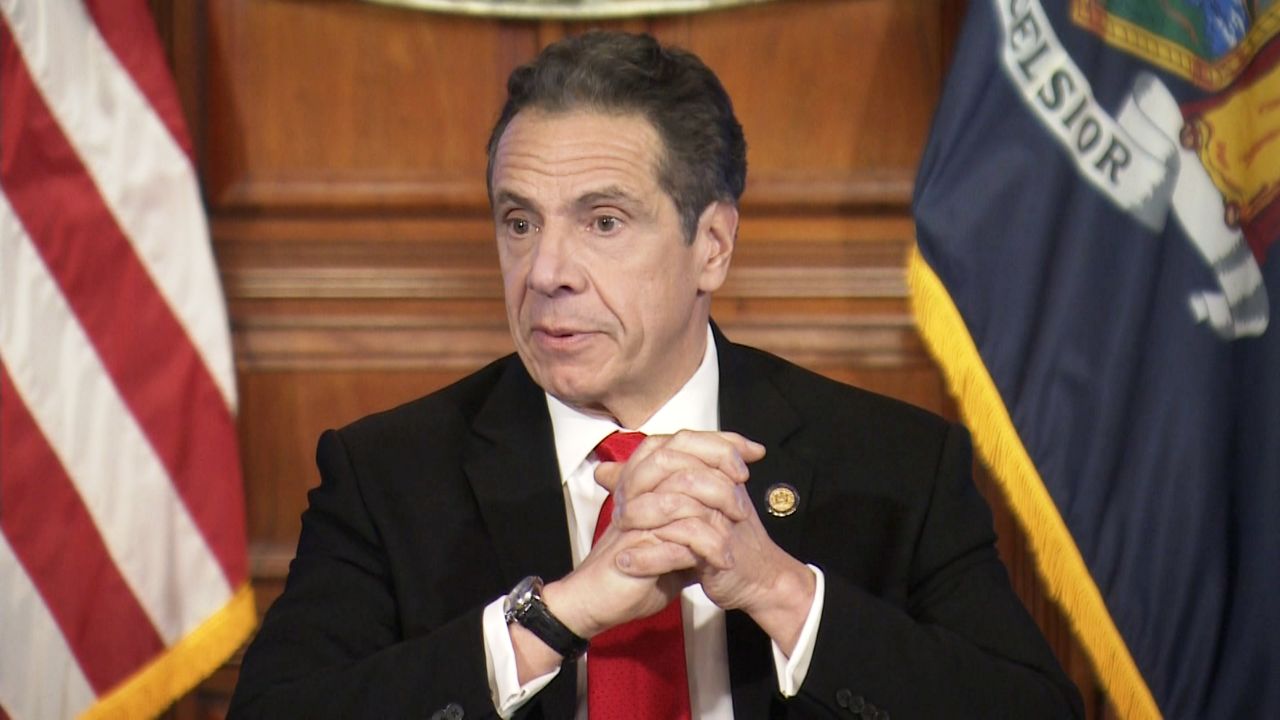 NYS Coronavirus Death Toll Passes 10,000 as Task Force Looks at How to Reopen the Economy

As the confirmed coronavirus death toll in New York state passes 10,000, New York and bordering northeast states on Monday announced the formation of a task force composed of health and economic development officials to determine how and when to reopen their economies.

Speaking to reporters in the capital in his daily coronavirus press briefing, Cuomo said 671 people died on April 12 in New York as a result of COVID-19.

This brings the total number of coronavirus-related deaths in the state to 10,056.

The state reported 7,349 deaths in New York City as of 12:30 p.m. (The city uses different methods to tabulate its count).

The city has reported 5,086 deaths in April — nearly five times the entire total up until that point, although there are concerns the death count is actually higher.

The state has reported, as of midnight Sunday, 195,031 confirmed coronavirus cases.

A week ago, New York City's confirmed coronavirus death count was 2,738. A week before that: 914.

Cuomo said the state has likely hit a plateau as hospitalizations continue to level off with ICU admissions and intubations also down.

But he again warned the state and New Yorkers must "stay the course."

Holding a briefing with updates on #Coronavirus. Watch Live: https://t.co/XX0lC3jtqk

"I believe the worst is over if we continue to be smart. And I believe we can start on the path to normalcy," Cuomo said.

Cuomo said the data shows there were fewer deaths in New York in the last 24 hours, fewer than 700 for the first time since April 6.

A REGIONAL APPROACH TO REOPENING THE ECONOMY DOWN THE LINE

The task force will include the top health and economic officials from each state as well as the chiefs of staff for each governor.

The group is expected to begin working Tuesday, but no timeline has been set.

"They're going to start talking literally tomorrow and start to scope that out," Cuomo said. "We didn't start with a timetable. We've said to the group we want it ASAP, but we want it [to be] smart."

The move comes as hospitalizations in New York over the last several days have appeared to reach a plateau.

Officials want to balance the re-opening of the economy by also limiting new infections of the virus.

Cuomo wants to take a regional approach to the issue to prevent "shopping" in other parts of the country and potentially spread the virus further.

The pandemic has shuttered non-essential businesses, including bars, restaurants, move theaters, and any place where people gather in large numbers. Millions of people have lost their jobs as a result and tax revenue has plummeted.

Cuomo says until there is a COVID-19 vaccine — which experts say is 12-18 months away on a mass scale — there is no way to guarantee safety for all New Yorkers.

The state-based approached comes as President Donald Trump has said he wants to reopen the economy nationally, a decision state governments have made individually.

Cuomo said Trump should provide specific guidelines for how that should work from the federal government's perspective.

Earlier in the day, Trump tweeted, “For the purpose of creating conflict and confusion, some in the Fake News Media are saying that it is the Governors decision to open up the states, not that of the President of the United States & the Federal Government. Let it be fully understood that this is incorrect … It is the decision of the President, and for many good reasons.”

Cuomo was asked to respond to the president:

“He left it to the states to close down. And that was a state-by-state decision. Without any guidance really, he took a position that it was a state’s decision,” Cuomo said.

Trump claimed the “total” authority Monday to decide how and when to reopen the economy after weeks of tough social distancing guidelines aimed at fighting the new coronavirus. But governors from both parties were quick to push back, noting they have primary responsibility for ensuring public safety in their states and would decide when it’s safe to begin a return to normal operations.

Trump would not offer specifics about the source of his asserted power, which he claimed, despite constitutional limitations, was absolute.

“When somebody is president of the United States, the authority is total,” Trump said at the White House. “The governors know that.”

.@NYGovCuomo tells @chrislhayes that @realDonaldTrump does not have “total authority.” Cuomo says “The constitution says we don’t have a king.” Cuomo working with governors to comprise a plan to open local economies after #coronavirus. Trump says President has that authority only

The comments came not long after Democratic leaders in the Northeast and along the West Coast announced separate state compacts to coordinate their efforts to scale back stay-at-home orders or reopen businesses on their own timetables.

Anxious to put the crisis behind him, Trump has been discussing with senior aides how to roll back federal social distancing recommendations that expire at the end of the month.

While Trump has issued national recommendations advising people stay home, it has been governors and local leaders who have instituted mandatory restrictions, including shuttering schools and closing non-essential businesses. Some of those orders carry fines or other penalties, and in some jurisdictions extend into the early summer.

And governors made clear it Monday they wouldn’t tolerate pressure to act before they deem it safe.

“The government doesn’t get opened up via Twitter. It gets opened up at the state level,” said Michigan Gov. Gretchen Whitmer, a Democrat.

While New York and the other nearby northeast states banded together, the governors of California, Oregon and Washington announced a similar pact. While each state is building its own plan, the three West Coast states have agreed to a framework saying they will work together, put their residents’ health first and let science guide their decisions.

“The house is still on fire,” Murphy said on a conference call with reporters. “We still have to put the fire out, but we do have to begin putting in the pieces of the puzzle that we know we’re going to need ... to make sure this doesn’t reignite.”

Trump, however, insisted it was his decision to make.

“The president of the United States calls the shots,” he said, promising to release a paper outlining his legal argument.

Trump can use his bully pulpit to pressure states to act or threaten them with consequences, but the Constitution gives public health and safety responsibilities primarily to state and local officials.

Though Trump abandoned his goal of beginning to roll back social distancing guidelines by Easter, he has been itching to reboot an economy that has dramatically contracted as businesses have shuttered, leaving millions of people out of work and struggling to obtain basic commodities. The closure has also undermined Trump’s reelection message, which hinged on a booming economy.

Trump’s claim that he could force governors to reopen their states also represents a dramatic shift in tone. For weeks Trump has argued that states, not the federal government, should lead the response to the crisis. And he has refused to publicly pressure states to enact stay-at-home restrictions, citing his belief in local control of government.

While Trump can use his daily White House briefings and Twitter account to try to shape public opinion and pressure governors to bend to his will, “there are real limits on the president and the federal government when it comes to domestic affairs,” John Yoo, a University of California at Berkeley law school professor, said on a recent Federalist Society conference call.

Mississippi Republican Gov. Tate Reeves, a supporter of Trump, said the question of when to lift restrictions would be “a joint effort” between Washington and the states.

Talk about how and when to reboot the nation’s economy has come as Trump has bristled at criticism that he was slow to respond to the virus and that lives could have been saved had social distancing recommendations been put in place sooner.

That frustration was amplified by comments made by Dr. Anthony Fauci, the nation’s top infectious diseases expert, who told CNN on Sunday that, “obviously,” had the country “started mitigation earlier, you could have saved lives.”

Trump responded by reposting a tweet that included the line, “Time to #FireFauci,” raising alarms that Trump might consider trying to oust the 79-year-old doctor. But at Monday’s briefing, Trump insisted Fauci’s job was safe after Fauci took the podium to try to explain his comments.

Trump has complained to aides and confidants about Fauci’s positive media attention and his willingness to contradict the president in interviews and from the briefing room stage, according to two Republicans close to the White House. They spoke on condition of anonymity because they were not authorized to discuss internal conversations.

But Trump has told aides that he knows blowback to removing Fauci would be fierce and that — at least for now — he is stuck with the doctor. On more than one occasion, however, he has urged that Fauci be left out of task force briefings or have his speaking role curtailed, according to the Republicans.

This story includes reporting from Zack Fink, Nick Reisman, and the Associated Press.