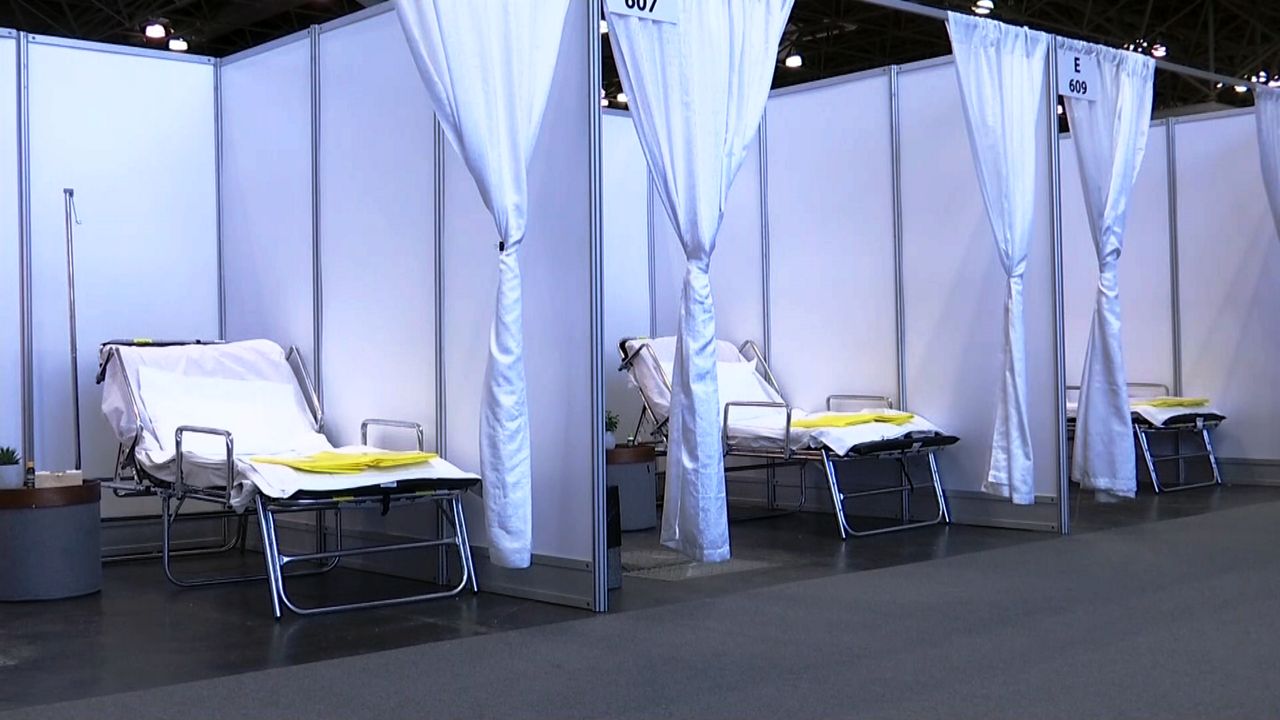 The numbers of cases are expected to only increase exponentially over the coming weeks and months as more tests are conducted.

The governor says 519 people have died in New York state so far.

Cuomo says the death toll is rising because some people have been on ventilators for a prolonged period of time.

"The outcome is usually not good," Cuomo said.

At the Javits Center in New York City giving a briefing on #Coronavirus. WATCH: https://t.co/Fwj4LXm0vn

While the death toll is rising, Cuomo says the rate of hospitalization is actually slowing, doubling every four days instead of every two.

The governor delivered the latest update from the Javits Center in Manhattan which has been transformed into a temporary hospital facility with 1,000 beds by the Army Corps of Engineers.

Little bit of a different setup at Javits today for ⁦@NYGovCuomo⁩ briefing. Members of the National Guard are sitting front and center, press is behind them and to the side. Behind where the Governor will be are the first makeshift hospital rooms and beds. pic.twitter.com/qe36ZX4PHV

Cuomo says he is asking President Donald Trump to give the okay to construct another four emergency temporary hospitals in the city.

Proposed sites for the hospitals include the Expo Center in the Bronx, Aqueduct Racetrack in Queens, the Brooklyn Cruise Terminal, and the College of Staten Island, a CUNY campus.

The number of discharged patients is now 2,045.

Cuomo says all hospitals in the state have been ordered to increase their capacities by 50 percent, if not 100 percent.

He says the state has a full stockpile of medical supplies and are distributing items to whichever hospital or region needs it. The state is still shopping across the globe for ventilators.

Cuomo also responded to reports that the state has a large number of ventilators ready to go in its stockpile and that the need for thousands more are being exaggerated.

"Everybody’s entitled to their own opinions, but I don’t operate on opinion," said Cuomo. "I hope we don’t need 30,000 ventilators. I hope some natural weather changes happens overnight and kills the virus. The numbers say you may need 30,000."

The governor announced schools across the state will remain closed until April 15, an extension of two weeks, and will be reassessed after that date. New York City schools are closed until at least April 20.

He also says non-essential construction sites in the city including luxury condos and office buildings will be ordered to close down.

Meanwhile, Cuomo reiterated that with an estimated $10 to $15 billion hole in the state budget, serious spending cuts across the board will be needed. The state budget is due Wednesday.

“We have no state revenues to speak of. We are going to have to dramatically cut state spending. You can’t spend what you don’t have.”

“We have no state revenues to speak of. We are going to have to dramatically cut state spending. You can’t spend what you don’t have.”

Testing for New Coronavirus Can Now be Done by City