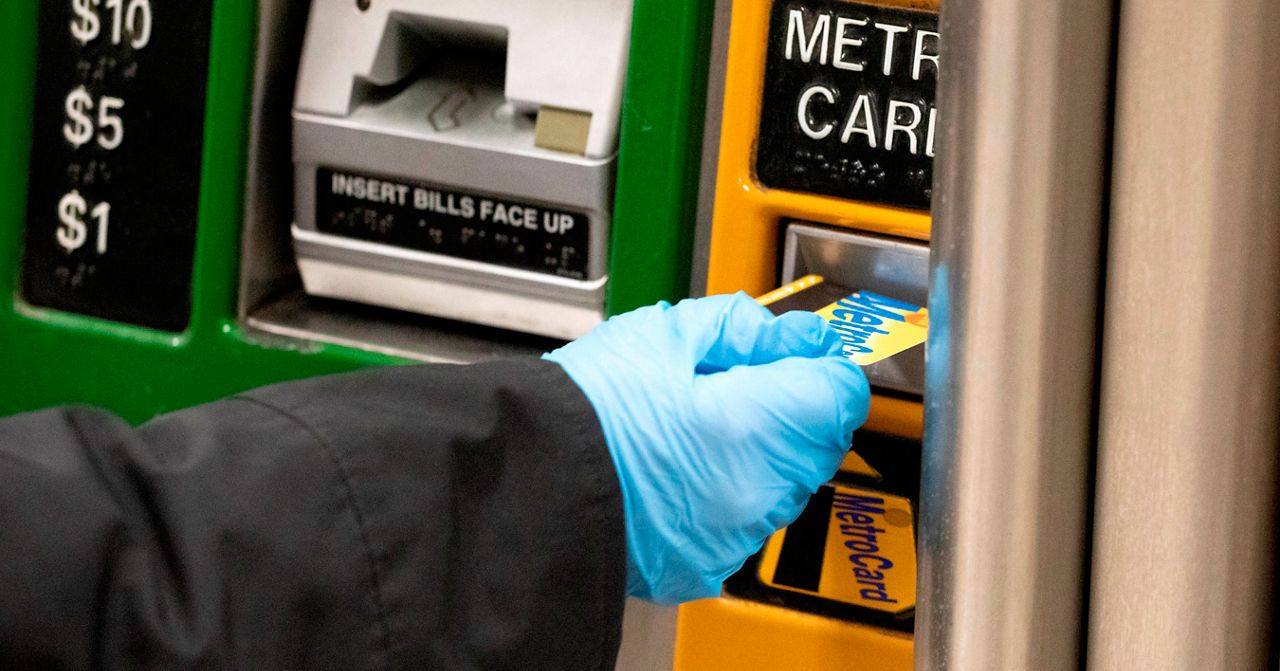 NEW YORK - In a press conference Thursday afternoon, Gov. Andrew Cuomo announced a new policy that would limit the number of people in a contagious environment to no more than 500. He also spoke on plans to reduce the spread of the new coronavirus and treat the infected by increasing testing as quickly as possible.

Cuomo is asking the Department of Health to accelerate the recertification process of former health care professionals to aid in hospitals dealing with the pandemic, as well as asking for help from medical school personnel.

Spaces in New York state where capacity is below 500 are being told to operate at just 50 percent. So if a banquet hall can hold 400 people, for example, only 200 should be inside at any one time.

The governor also announced new protocols for nursing homes. Staff will now have to wear protective gear, and senior centers can no longer have visitors, including family members. So far, the coronavirus has proven to be far more serious in seniors than young people.

"It is worse than the flu in terms of the numbers, yes. We don't want to lose anyone, that is unfortunate," Cuomo said. "But it's more being able to handle this situation governmentally, operationally."

The state also wants to prepare in case hospitals become overwhelmed. Officials are looking for state-owned spaces that can be used as makeshift hospitals should bed capacity at current locations become exhausted. The expectation is that this crisis will worsen before it starts to level off.

According to the governor, so far the state's hospitalization rate is 14 percent. That is slightly less than the 20 percent that had been anticipated. 80 percent of coronavirus cases self-resolve, meaning no hospitalization is required.

A STATE OF EMERGENCY IN NEW YORK CITY

Mayor Bill de Blasio on Thursday declared a state of emergency over the crisis, an order that gives him more executive powers, although none of those took effect by Thursday evening.

The range of potential actions he could take are:

The Laboratory School of Finance and Technology and South Bronx Preparatory, which are located on East 145th Street in Mott Haven and share a building, were closed Thursday after the student's claim, but the schools chancellor said in the evening that the student did not in fact test positive for the virus.

Because the city could not immediately confirm the test result, officials closed the schools and cleaned and disinfected them.

Although the public school system will stay open, the Archdiocese of New York announced that Catholic elementary schools in Manhattan, the Bronx, and on Staten Island will be closed next week.

On Staten Island, St. Teresa's, a Catholic school, was closed after a basketball coach tested positive for coronavirus.

At least 15 students at Intermediate School 27 were also under precautionary quarantine for COVID-19 coronavirus after having interacted with the coach at St. Teresa's.

The 62-year-old was hospitalized; players may have been exposed and so they were advised to stay home for the next two days.

Broadway has suspended all of its performances due to the coronavirus, the Broadway League announced Thursday. They will be suspended through at least April 12.

State officials say the impact on the economy is likely to be enormous.

"The loss of revenue here to the state government right now is incalculable. I mean, you have no idea," the governor said. "It's not just Broadway theaters — you have hotel cancellations, conference cancellations, you have people not going to work."

The part-time employee worked four nights during the showing of "SIX: The Musical" at the Brooks Atkinson Theatre. He also worked two nights of "Who's Afraid of Virginia Woolf?" at Booth Theatre.

The Booth underwent a deep cleaning Wednesday and the Brooks Atkinson was cleaned overnight.

In Manhattan, the Metropolitan Opera and Carnegie Hall announced Thursday all rehearsals and performances through March 31 have been canceled.

Meanwhile, National Guard troops moved into New Rochelle, a city in Westchester County located about five miles from the Bronx.

The one-mile containment area will last until March 25.

All large gatherings there are canceled, and schools and house of worship are closed. Businesses like grocery stores and delis will stay open.

The National Guard will help deliver food to homes in quarantine and help disinfect public spaces.

The state is not closing streets or implementing travel restrictions in New Rochelle at this time. It comes as the World Health Organization has declared the outbreak a global pandemic.

Cuomo says the federal government's testing capacity for coronavirus is nowhere near where it needs to be.

He announced on Wednesday that New York will start contracting with private labs to increase the number of tests.

"The FDA needs to sign off on the actual protocols of some of these tests. And that is still complicating the situation, but this will greatly increase our testing capacity as we get these 28 labs up and running," Cuomo said.

The federal government has only authorized about 5,000 tests in total across the nation, far lower than in many other countries.

New York has the second highest number of cases behind Washington state.

Coronavirus protection tips now coming up on #LinkNYC kiosks. “If the train is too packed, wait for the next one.” pic.twitter.com/O2m7BEG2pX

On the national level, President Donald Trump is suspending most foreign travelers coming in from Europe in response to the coronavirus.

The president made the announcement during a speech from the Oval Office on Wednesday night.

"To keep new cases from entering our shores, we will be suspending all travel from Europe to the United States for the next 30 days. The new rules will go into effect Friday at midnight. These restrictions will be adjusted, subject to conditions on the ground," Trump said.

The ban applies to most foreign nationals who have been to certain European countries within 14 days of their arrival in the U.S.

It does not affect citizens of the United Kingdom, or Americans returning home from Europe. But the Department of Homeland Security says Americans will be subject to enhanced health screening procedures at certain airports.

Those airports and procedures have not yet been announced.

The coronavirus outbreak is forcing the postponement of the city's St. Patrick's Day Parade for the first time since its inception in 1762.

Cuomo said the decision was made after he spoke with parade organizers. They agreed a postponement was the safest move for everyone involved.

"I had several conversations with the organizers of the St. Patrick's Day Parade to determine whether the parade should move forward in light of the evolving coronavirus situation and increased case count in the New York City area," Cuomo said in a statement released Wednesday night. "Following those conversations, I recommended and the parade's leadership agreed to postpone this year's parade due to the high density and the large volume of marchers and spectators who attend."

A new date for the parade has not yet been announced.

In response, de Blasio tweeted, "Whether it's in the heat of summer or on a clear fall day, New Yorkers will come together to celebrate St. Patrick's day and our city's great Irish-American community."

John Jay College closed their doors Wednesday after a student tested positive for the coronavirus.

The president of the college sent out a letter saying the student is at home recovering. They were on campus Thursday evening for one class and did not develop symptoms until Saturday. That student did not return to the campus this week.

The city has no plans to close any public schools over coronavirus, but Cuomo said Monday that a school will close for at least 24 hours if a student or staff member tests positive.

The coronavirus concerns forced City Council Speaker Corey Johnson to postpone his State of the City address that had been scheduled for Thursday.

In a statement, Johnson said, "I was looking forward to the speech but it seemed like an unnecessary risk. We will still announce the policies and proposals we had planned for the State of the City on Thursday."

No new date has been set for Johnson's address.

Several events around the city have been canceled or postponed over coronavirus concerns.

The New York International Auto Show has been pushed back from early April to late summer. The event at the Javits Center will now run from August 28 to September 6.

The New York City Half Marathon has also been cancelled. The race was supposed to take place on Sunday. Registered runners will have the option of a full refund of their entry fee, or guaranteed entry to next year's half marathon.

The National Hockey League is pressing pause on the 2019-2020 season amid the threat of the coronavirus spread.

In a statement, NHL Commissioner Gary Bettman said the suspension will begin Thursday, adding "it is no longer appropriate to try to continue to play games at this time."

Bettman said he expected the season to resume "as soon as it is appropriate and prudent."

Wednesday evening, the NBA announced it suspended its season "until further notice" after a Utah Jazz player tested positive for the coronavirus, a move that came only hours after the majority of the league's owners were leaning toward playing games without fans in arenas.

The Brooklyn Nets last played the Jazz on January 14, in Brooklyn.