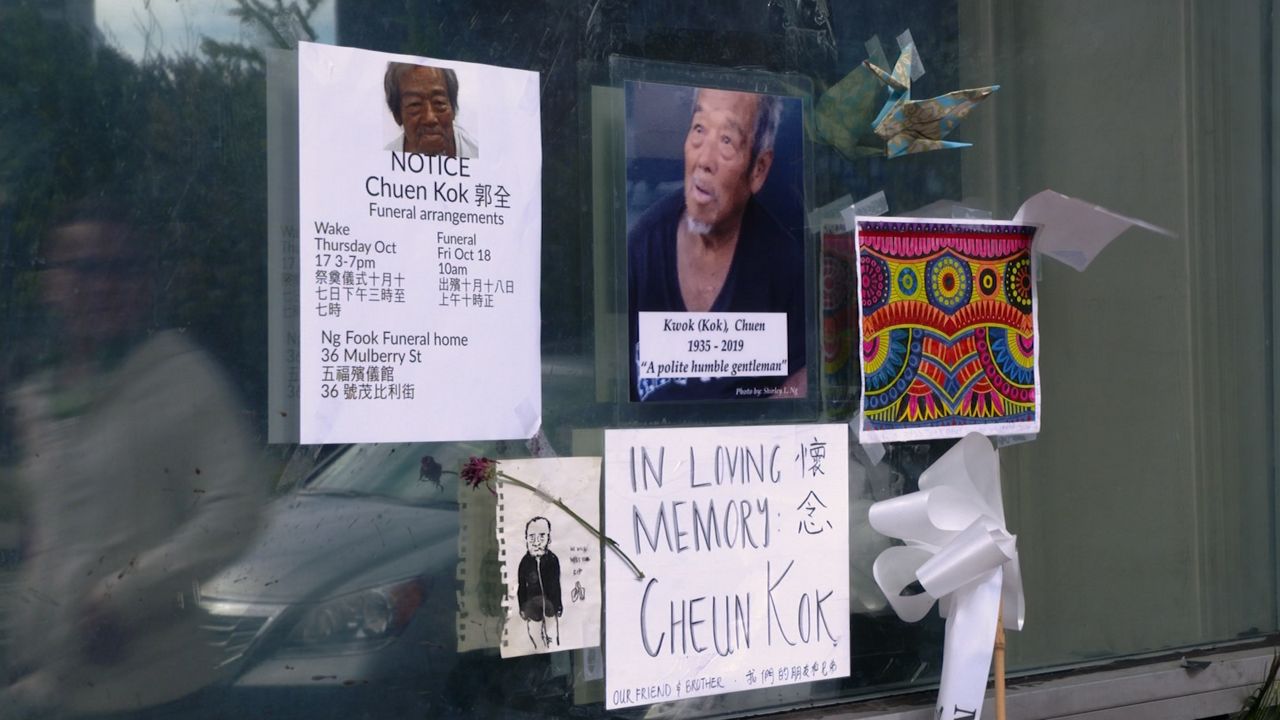 Chuen Kwok: Why an 83-Year-Old Man Found Himself Homeless in the Twilight of His Life

Five men who went to sleep on the streets of Chinatown were beaten in the middle of the night in the beginning of October. Four of them died. They all fit into the fabric of our community in some way or another. In a special series, Courtney Gross takes a look at the lives that were lost — the victims of a tragedy that has shed light on the dangers of living and sleeping on New York City's streets. This is part two of her four part series.

A month after a deadly night, the streets of Chinatown have returned to normal. Just weeks ago, residents and passersby would stop here and pause. Piles of flowers and fruit piled up on the sidewalk. A picture hangs above them in tribute.

A month later, it's gone. Gone, too, is Chuen Kwok — Chinatown's fixture "uncle" to the neighborhood. His seat outside of the pork chop house is empty, his simple meals no longer served. He was 83 years old when he was struck down for being homeless, for sleeping on the Bowery. Kwok was the last victim of a brutal quadruple murder in Chinatown — all targeting men who were sleeping. It was just after Kwok's beating that the alleged killer was caught.

With no family, at least no family officials could find here in the United States, it was a handful of community leaders and neighbors who went to New Jersey last month. A donated burial plot in Robbinsville Township is where Kwok was laid to rest. There, they offered tears for a mysterious friend, and flowers and dirt to say goodbye. "I think a lot of people meant to get to know him," said Shirley Ng, a community activist. "Many times, we walk by a lot of people not stopping or thinking, 'Maybe next time.' But there were a lot of people who came to his wake, and I am really grateful. Few of the other homeless, who knew him from the shelters, came to pay their respects. And they were probably thinking it easily could have been them."

It is a very long way from his native Hong Kong. When he came to the United States is unclear. He was undocumented.

Those closest to him here, like his pastor, had few details.

"I wish I had known him more, but it’s just the fact that, you know, I figured he must have had such a long story. So I never tried to get into it," said Pastor Billy Yip. (Chuen Kwok and Yip smile for a picture together, one of the only known photographs of Kwok in New York City.)

Yip would see Kwok at church. He saw him the night before he died, stopping briefly where Kwok usually slept to slip some cash in his hand.

"You know, when I left him, his eyes. That's the thought that came," Yip said. "Of course, in that sense I miss him. I mean, life is like this. Only when things pass, only then do we wish we had done things differently. I really wish I would have stayed longer, talking to him more. I think, by the look, he cherished relationships."

Yip says Kwok was not always homeless. He lived with a woman in Chinatown, who friends called his wife.

"I can see that he loved his wife dearly," Yip said.

When she fell ill and died some 15 years ago, Kwok began to struggle.

"He basically lived at his wife's apartment. So, because he was undocumented, I think that employment, a job, wasn't stable," Yip said. "He was working here and there. I believe the financial condition wasn't that good."

By that time, he was already in his 60s. He had a tough time finding work. He turned to the streets, and to the shelter system.

Peter Smith is a volunteer at the New York City Rescue Mission, located just blocks away from where Kwok was killed.

"So, I dialed up the Chinese translator on my Google translator, and that's how I communicated with him. I would ask him questions and the phone would say it in Chinese," Smith told NY1. Kwok would come to the mission for a warm bed, one of dozens set aside for single homeless men.

"He was such a sweet man, a great sense of humor. He was always laughing," Smith said. "Everyone here, all the staff, they had a special feeling for him. They knew this is an 83-year-old man who is homeless. He walks with a cane, very slow. He was a little guy, under five feet."

For the last months of his life, it appears Kwok opted for the streets, no longer looking for a bed inside.

Sometimes, he was found at the same spot he was killed. Now, of course, he’s interred forever 60 miles south of the Bowery.