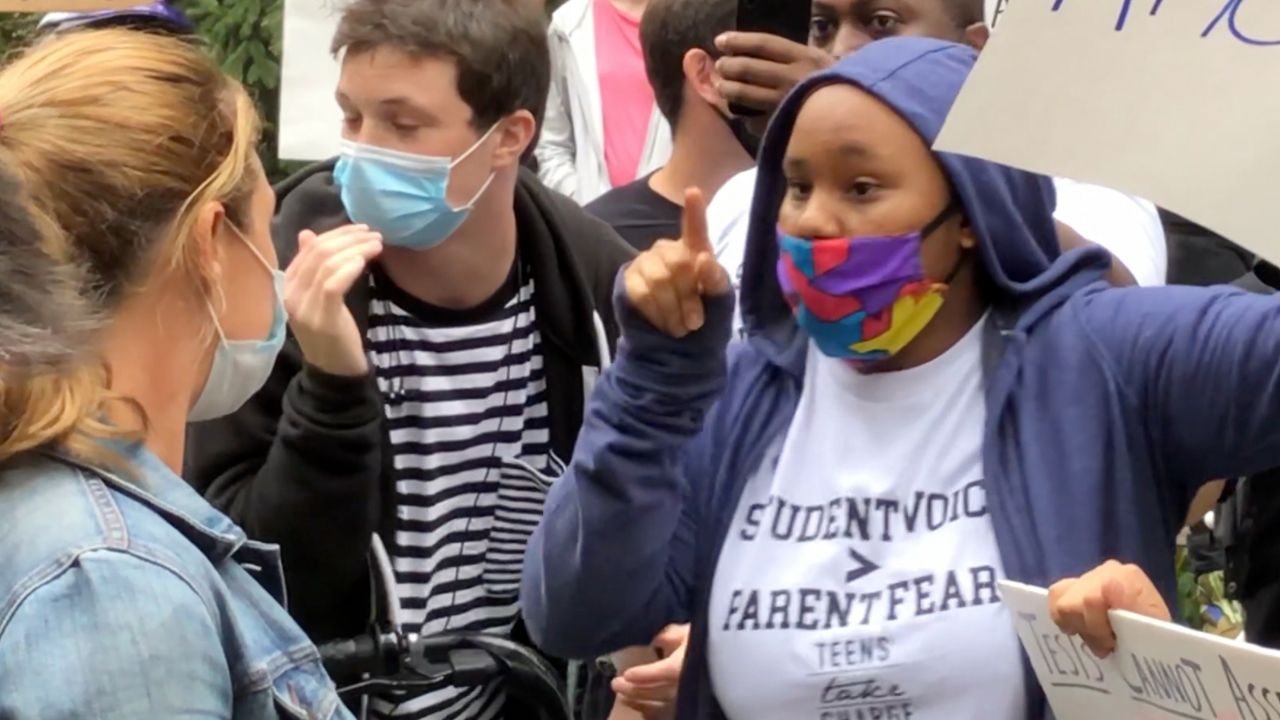 NEW YORK — Protesters nearly came to blows Fridays as about a dozen people who oppose the admissions test for the city's elite public high schools marched in on more than 100 people who support the high-stakes exam.

There was some pushing and shoving, but eventually the larger rally resumed.

They’re upset with Mayor Bill de Blasio and Schools Chancellor Richard Carranza for not scheduling the exam, which was supposed to be given the weekend of November 7 but was canceled.

"Follow the school calendar. Follow the screening and testing that you had promised us back in June," Phil Wong of the the group Place NYC told the crowd.

The Specialized High School Admissions Test (SHSAT) determines admission to eight high schools, including Stuyvesant, Bronx Science, and Brooklyn Tech. The mayor and chancellor are no fans of the exam, but it is required under state law. "Six feet are for social distancing, but right now it feels like they are putting are schools six feet under," said Place NYC Co-President Lucan Liu.

They’re worried the city's foot dragging on the test, and its failure to set testing and application dates for Gifted and Talented programs for younger kids, could be a prelude to doing away with the systems to get into these programs altogether. Opponents are hoping for that.

"Now that the inequity has been laid bare and no one can deny it, what is the chancellor willing to do?" asked Teens Take Charge Program Manager Tajh Sutton.

The group Teens Take Charge organized the protest against the tests. Mostly teenagers, they came early to set up, fed up with a system they see as discriminatory, with Black and Brown students underrepresented at the specialized schools. "There’s no way you can fix it ... You must destroy it and create a whole new system," said high school senior Maryam Diallo of Teens Take Charge.

“They screen more on privilege then on academic merit or grit or your ability to do well in school,“ said high school junior Kai-Lin Kwek-Rupp with Teens Take Charge.

They say those with more resources achieve more on the test, but advocates for the testing regimen counter it’s the school system that is failing children.

"By getting rid of the testing, you're hiding the problem the testing actually tells you is the problem. It tells you where the resources need to be allocated," said Wong.

City Hall has not yet responded to the concerns laid out on its doorstep Friday, but this week the schools chancellor said decisions were forthcoming and new distance learning may provide an opportunity to increase the number of students who can enroll in specialized instruction.

That's something both sides here want.