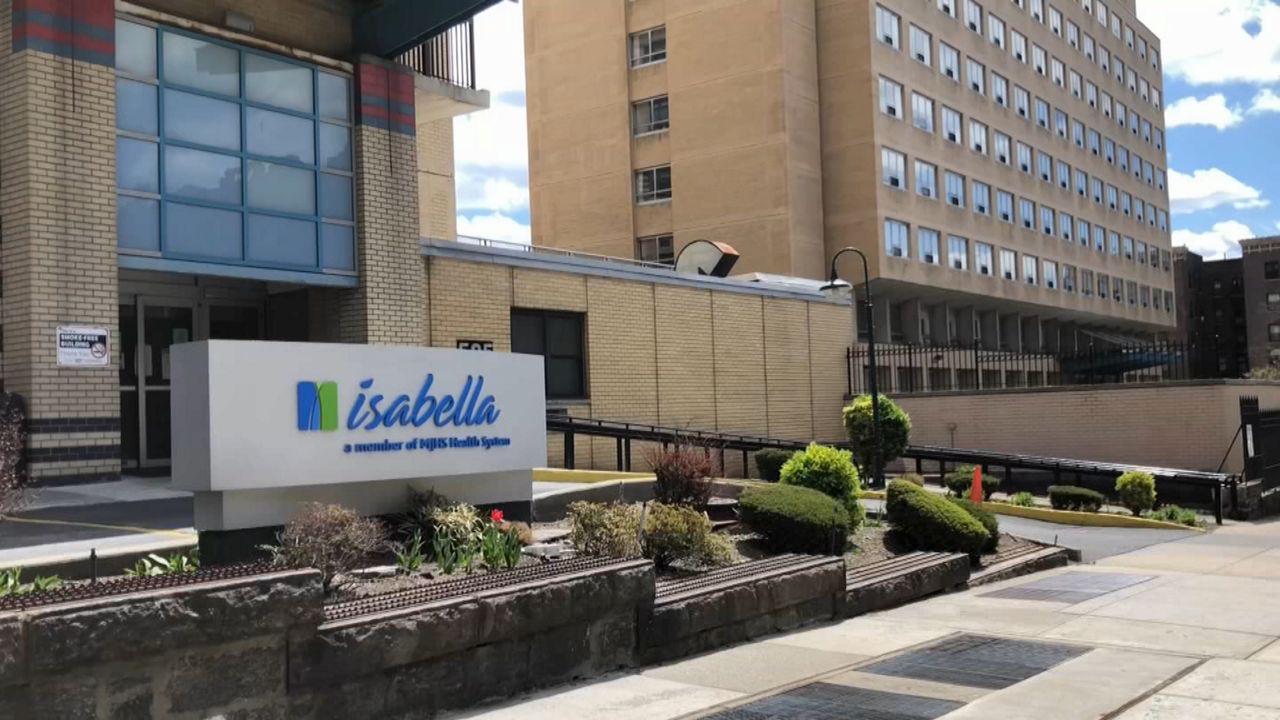 Update: After the publication of this NY1 story, state Attorney General Letitia James said Saturday her office would investigate complaints into Isabella Geriatric Center. Her office sent NY1 this statement:

“Nursing homes are responsible for some of the most vulnerable New Yorkers who are especially at risk during the coronavirus crisis. We have received complaints about numerous nursing homes facilities, including Isabella. We are actively investigating these complaints and remain concerned about fatality rates, treatment, infection rates, and whether nursing homes are adequately communicating with families of residents.”

Near the top of Manhattan in Washington Heights, Isabella Geriatric Center looms over a nearby park. It’s a massive 705-bed nursing home.

When we visited last week, black tarps were hanging over one parking lot entrance, hiding what was in the back of the facility. Only residents could look down and see it clearly: It’s a refrigerated trailer for bodies, only found by NY1 through a metal fence at the adjacent building.

That's not the only thing the nursing home is trying to hide.

“They didn’t even test my mother. On April 1, when we got in touch with them, we asked them, ‘was she was tested for COVID? Does she have COVID?” Melody Jenkins said. They said, ‘She’s going to make it, she’s very sick.’”

“‘We’re not doing tests at Isabella, only at the hospital. And that’s why we are sending them to the hospitals,’” a nursing home officials continued, according to Jenkins.

Adrienne Blackett died at Isabella on April 6. She was 68 years old. The cause of death was COVID-19. “She takes the phone in there. I hear my mother. She sounds horrible. Barely could talk without gasping for air. Coughing,” said Jenkins, Blackett’s daughter. “It’s crazy how fast it took place. The sickness got her so fast from four days prior.”

According to the state, as of Wednesday, only 13 people have died from COVID-19 at this Washington Heights nursing home.

But that number is deceiving.

The death toll is much, much higher. At least 98 residents of Isabella Geriatric Center have died since the pandemic started. They either tested positive for COVID-19 or were suspected to have the virus. They died on site, at the home, or at a nearby hospital. It's almost 14 percent of the residents.

These numbers have not been disclosed by the state or Isabella until now. The number of deaths at the nursing home far exceeds the reported numbers of any other nursing home in the entire state.

In mid-April, Isabella admitted to a growing death count. In a message on its website, the nursing home gave the official count it gave to the state but went on to say at least 19 people died in the hospital, too. It said another 37 deaths at Isabella and one at a hospital were suspected to be from the coronavirus.

The facility has since deleted that paragraph from the website.

In response to this story, a spokesperson for Isabella said each death is heartbreaking and its staff is grieving along with families. When it is safe to do so, it will host a memorial service.

Of course, a service does not erase what happened at the nursing home.

Sources told NY1 that Isabella did not have enough COVID-19 tests to tackle the growing number of infected patients. That meant it wasn’t swiftly separating people with the virus.

A spokesperson says the facility is getting more access to testing now.

Families couldn’t get information, especially after visitors were banned on March 12. We spoke to one woman who lost her mother. She did not want to use her name.

“I don’t understand. They didn’t reach out to us until the last minute to tell us she’s not going to make it. How does that even happen? There was no communication. The nurses station, they wouldn’t pick up the phone, so you had to call over and over again,” she said. “April 6 was just the worst day. It was the worst day.”

Toribio Antonio Garcia was supposed to be rehabilitating at Isabella after a tracheotomy surgery at the end of March. He was there for nine days, and then he died. He was 62 years old.

In his final hours, he pleaded for help, struggling to breathe, writing these notes to his family: We spoke to the family over Skype this week:

“They did not inform us that COVID-19 was at the facility. We believe he deteriorated because of their lack of response,” said Xiomara Garcia-King, Garcia’s daughter. “Again, as my brother Anthony said, so many phone calls I’ve had to make in just one day because my father would press his call button and no one would come and respond."

"My father passed away. He was by himself with no one around, and he suffocated,” said Mia Lawas, a daughter of Garcia.

The same day Garcia died, Barbara Guzman passed away. The family told us they believe an overwhelmed staff led to the neglect of their grandmother.

They never got to say goodbye. No Skype or FaceTime, as promised by the facility.

We asked Isabella if the outbreak there is contained. A spokesperson said the incidence of COVID-19 is declining.