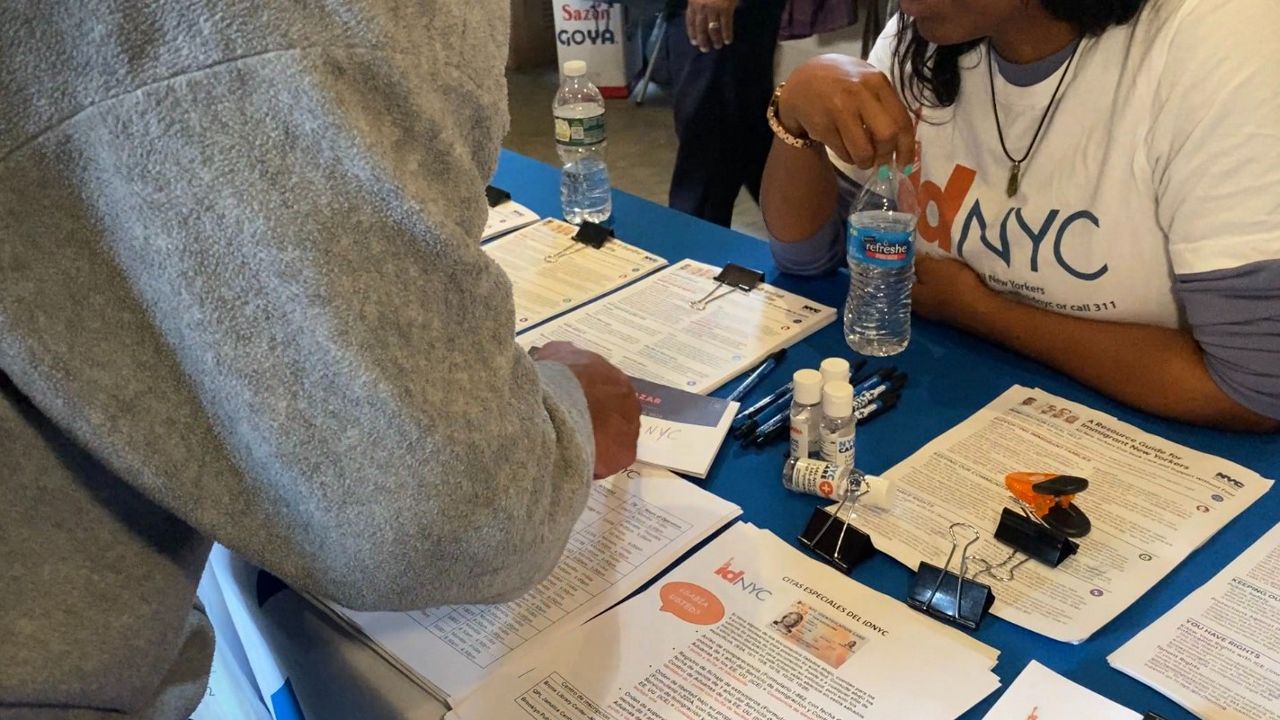 Migrants in Brooklyn received free meals, clothing and information on how to apply for identification, healthcare and school. (NY1/Rebecca Greenberg)

Hundreds of migrants attended an immigrant resource fair in Brooklyn on Saturday to get free meals, clothing and legal counsel.

Those who were in attendance are among thousands of asylum seekers who were bused to New York City this summer from the U.S.-Mexico border.

José Barrios volunteered at the fair to help migrants find clothes for their families.

He started a new life for himself in the city after immigrating from Venezuela this summer.

“We must value this country and the people who have opened the doors for us,” Barrios said. “I feel happy to help motivate other people to come and participate in this immigrant fair.”

The event, held inside a 7,000-square-foot art gallery in Bushwick, was organized by State Senator Julia Salazar and Brooklyn District Attorney Eric Gonzalez.

“New York City has been the home of immigrants and people who’ve fled other places to start a life,” Gonzalez said. “These folks are here seeking asylum. We want to make sure that they have all the support that’s very consistent with the Brooklyn way.”

The fair specifically targeted asylum seekers who recently arrived in the city and are living in Brooklyn shelters. Migrants received free meals, clothing and information on how to apply for identification, healthcare and school.

“Many of them already have court dates that they need to keep up with,” Salazar said. “It’s really important that they have legal counsel.”

Mayor Eric Adams has said that the city’s shelter system is at its breaking point. Since May, 15,500 asylum seekers have gone through shelter intake and over 11,800 are currently in the system, according to City Hall.

“We really want to make sure that people are spending a minimal amount of time in temporary housing,” Salazar said. “It really underscores the urgency of creating more permanent housing for low-income families.”

Barrios said the best way to get migrants out of the shelter system and into permanent housing is to provide them with resources to get jobs and become U.S. citizens.

“They receive your help and they know that in this country, they are not alone,” Barrios said. “They have people who support them and they have people are actually defending the rights of immigrants.”

Meanwhile, Adams has announced plans to house migrants in a tent city at Orchard Beach in the Bronx.

He’s also calling on the White House to send $500 million in emergency funding to help pay for migrant services for at least one year.