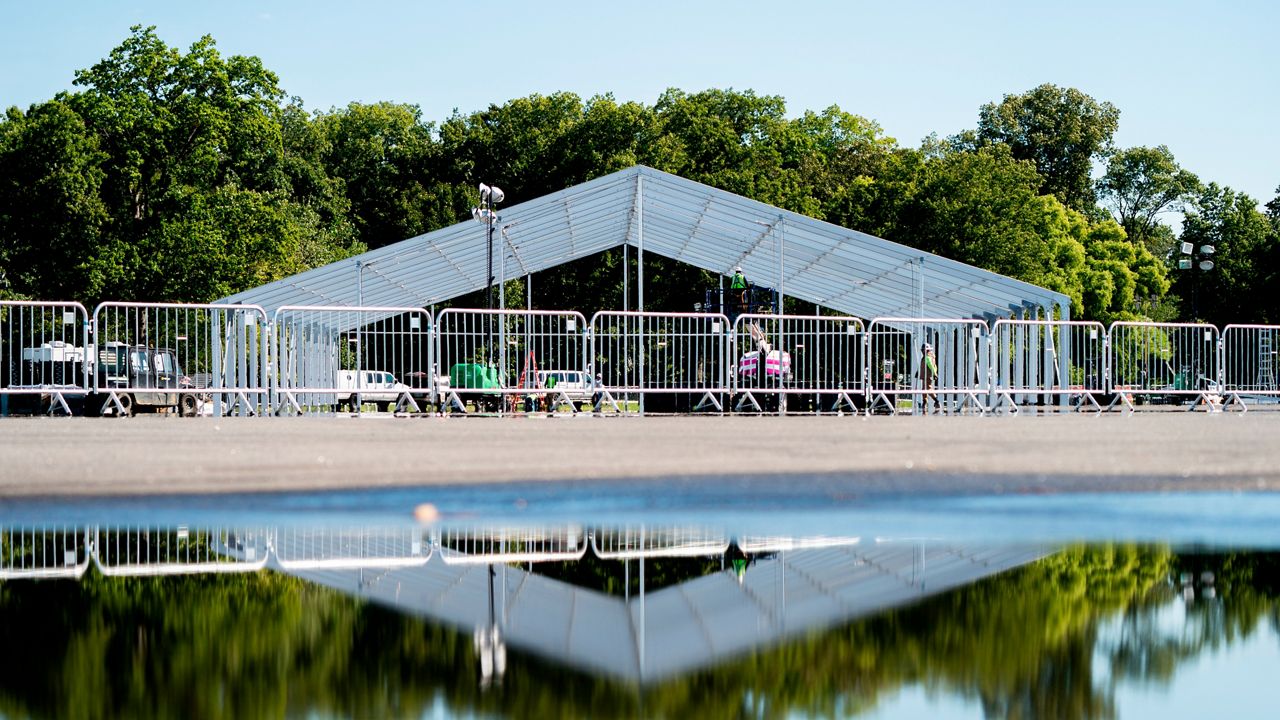 A metal frame for a large tent has been constructed on the parking lot at Orchard Beach, in the Bronx, in front of a row of trees and behind a crowd-control fence. (AP Photo/Julia Nikhinson)

City Council members sought details from agency officials on a city effort to create the first of several temporary tent camps to house a growing number of asylum seekers from the southern border in a hearing Friday.

The so-called “​​Humanitarian Emergency Response and Relief Centers,” or HERCs, will house some of the more than 15,000 migrants who have come into the city since the spring, many of them sent directly on buses chartered by the governments of Arizona and Texas.

The first is being constructed in the parking lot of Orchard Beach, in the Bronx, and has driven concerns from council members and immigration advocates over its access to supportive services, exposure to flood risk, the potential for the spread of infectious diseases and whether it violates the city’s longstanding right-to-shelter law.

The shelters — semi-permanent, metal-framed tents that officials said are designed to operate year-round and through extreme weather — are set to open next week.

Shahana Hanif, the chair of the council’s immigration committee, said she was concerned that migrants being taken to the tent camp upon arriving in the city would lose access to the kinds of services the city is required to offer in the homeless shelter system.

“No amount of legal gymnastics can justify what's happening here,” Hanif said. “The administration is carving out asylum seekers from this basic right.”

Zach Iscol, the commissioner of the city’s emergency management department, said that anyone taken to the tents can elect to enter the shelter system. About one-fifth of people arriving in the city, he said, are trying to get somewhere else in the country.

The tents, he added, will make it easier for the city to provide the specific kinds of services that the newly arrived migrants need, such as providing medical care or setting them up with a sponsor.

“That’s the purpose of that operation,” Iscol said. “By no means is it there to replace or somehow prevent them from entering the shelter system.”

The Orchard Beach location was one of 60 the city considered, Iscol said, and will likely be the first of several sites as the number of migrants in the city grows by potentially tens of thousands. The camp required 150,000 square feet to meet capacity needs.

Already, between four and nine buses arrive at the Port Authority bus terminal each day carrying migrants from border camps, alongside other buses arriving directly in front of intake centers and other locations.

Under questioning from Hanif on whether the city would commit to not housing minors in congregate settings, Iscol said the city “wants” to do that.

“This is an unprecedented humanitarian crisis,” Iscol said. “I can't tell you what is going to happen in two weeks, or three weeks, or four weeks.”

Officials said they plan to have migrants stay at the camps for upwards of four days, though they said they would not expel people from the tents after that period.

Upon arriving, the newly arrived migrants will be screened for infectious diseases. If they test positive for COVID-19, they will be put in a special isolation ward and given antiviral treatments, said Dr. Ted Long, a top official with the city’s hospital system.

Workers at the site will schedule the migrants for meetings with lawyers at a city site in Manhattan. The city will also provide South American cuisine at three meal times per day, and offer recreation space, officials said.

“We are responsible for them,” Adams said. “We are actually bringing people into our house, and possibly suscepting them to hazard.”

Iscol said the city would evacuate the camp if facing a coastal storm surge, and had set up temporary inflatable dams to stop tidal flooding, but that there are countless parts of the city that face flood risk from rainfall.

“It’s our hope that at some point in time we displace Orchard Beach to another location,” he said.

Council members also pushed for estimates of spending, as officials said they were still tabulating expenditures and appealing to state and federal agencies for funding.

Despite ongoing reports of staffing shortages at many city agencies, Iscol said that the city was prepared to continue responding to rising numbers of migrants, and was contracting with outside firms and nonprofits to provide staff members at the tent site.

“I can probably guarantee that most of the workers in your agency have been working indescribable hours, even though they won't say that on the record,” Councilwoman Carmen De La Rosa said.

Iscol responded to questions over the main contractor used to build the tents: SLSCO, a firm that helped build the border wall that President Donald Trump made the centerpiece of his campaign, and which also built a field hospital and managed vaccination sites in New York City.