Venice has a new weapon to combat sea level rise

Venice, Italy is one of the most vulnerable spots in the world for flooding, but a new tool could help the ancient city survive as sea levels rise.

It took decades to plan and isn't fully operational yet, but Venice, Italy has seen good results from early trials of its storm gate system.

The project cost near $6 billion and is known as MOSE. It stands for Modulo Sperimentale Elettromeccanico and should be fully operational in 2022.

It consists of 78 storm barriers that lie flat on the seafloor until needed. They then rotate above the surface to block the Adriatic Sea from entering the lagoon that houses Venice. Here's how it works. 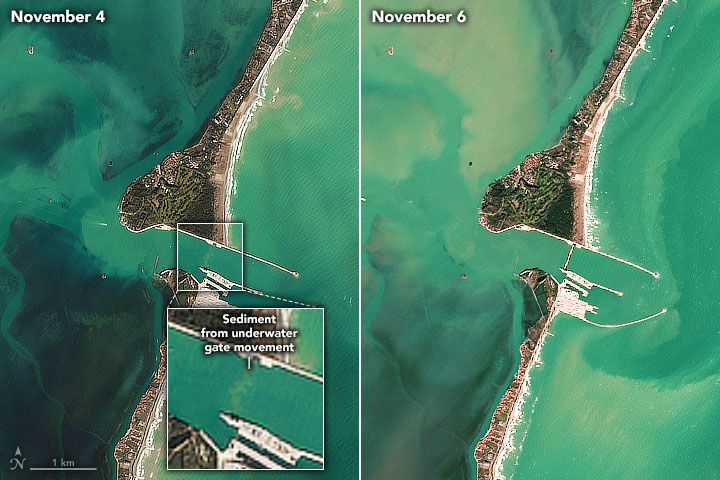 When forecasters predict a storm will raise tides 51 inches or more, the storm gate operators activate the barriers.

In a recent storm in November, the gates were a big success. The forecast was for flooding to impact 60% of the city, including the famous St. Mark's Square, the lowest part of the city.

During the storm, the water rose to 51 inches on the Adriatic Sea side of the barriers. In Venice, the levels only reached 32.7 inches, and no major flooding occurred.

Flooding is becoming more common in Venice. During the first half of the past century, major flooding occurred twice per decade.

More recently, Venice has had major flooding 40 times a decade. The MOSE flood barrier network is essential for protecting the ancient city and is truly a marvel. Recently, satellites caught a rare glimpse of it. 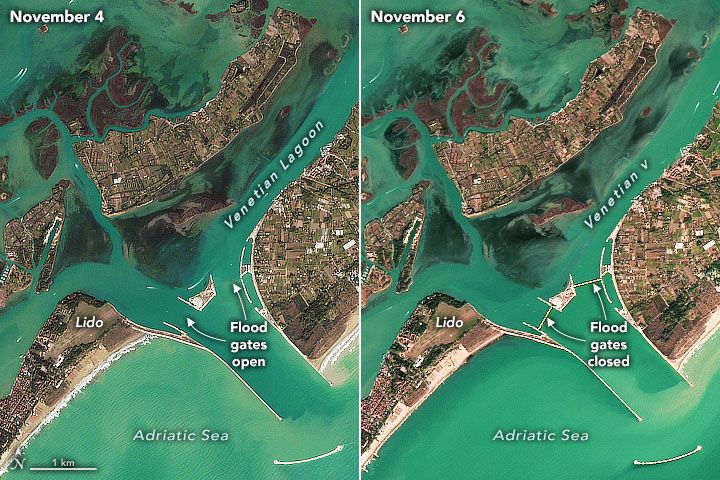 Typically, getting a satellite image of the gates is hard because operators only deploy the flood barriers during bad weather, and storm clouds block the view of the satellites.

But in these satellite shots, we can see the MOSE barriers. These were lucky images since the European satellite only passes over these areas every two to three days, and every eight days for the United States satellite. So, getting clear skies when the gates are in use and when the satellite is in the area is a rare combination.

Scientists say that in the next few decades, the barriers might have to remain up anywhere from three weeks to two months each year as the climate warms and sea levels rise.

The gates were first used in 2020 when they were deployed 20 times. This came after a disastrous flooding season in 2019 that brought 25 high-water events.

In 2021, the gates have been used five times through early November, the start of storm season.

The storm gates are some of the first of it's kind and are being studied closely.

Could it work in NYC?

In New York City, there have been discussions about the feasibility of constructing flood barriers.

The idea of using storm gates to protect the Big Apple began after Sandy. That storm brought a record storm surge of 13 feet to lower Manhattan. Water flooded the subway system and some power stations. In addition, more than forty people lost their lives in the five boroughs.

The storm gates in Venice are impressive but are much smaller than what we need to protect New York City. The gates in Venice cover about 1 mile. A gate system for NYC would need to be 6 miles long.

The cost of Venice's MOSE project is around $6 billion. The estimates for a NYC project are over $100 billion and a time frame of 25 years.