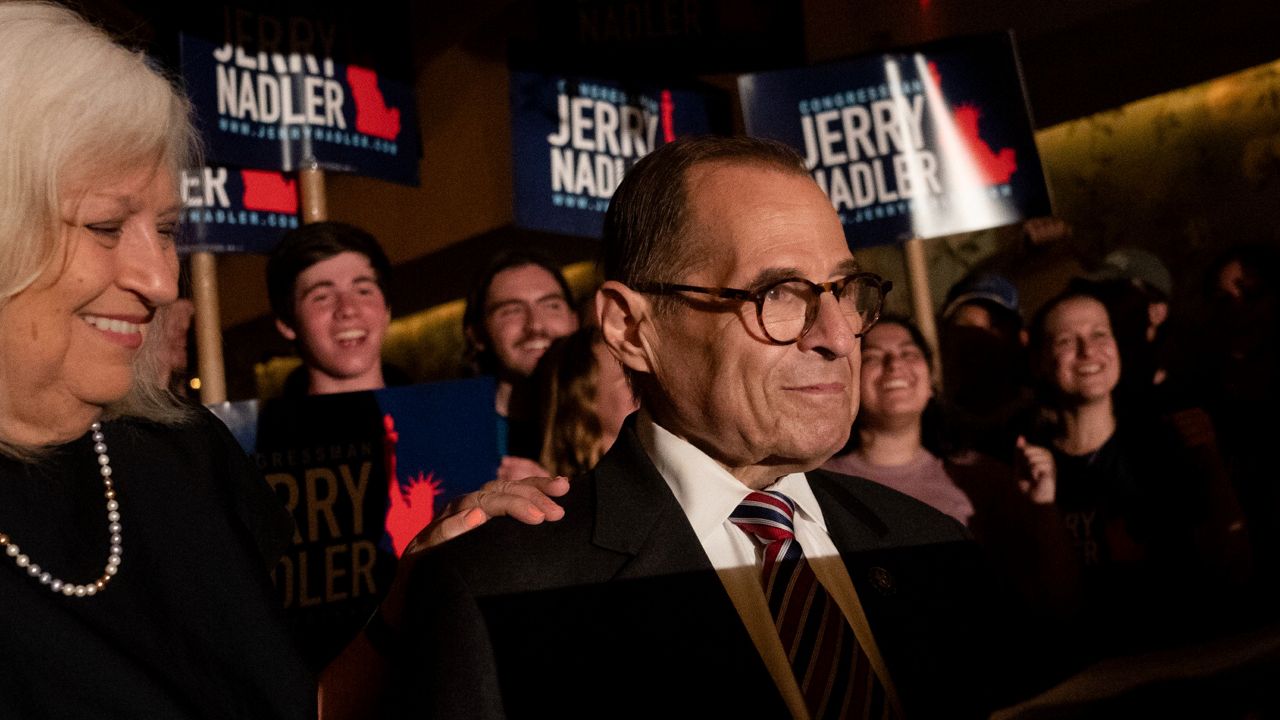 They were two U.S. House heavyweights who worked side-by-side for three decades to deliver for New York City.

Now, there is one.

Nadler’s victory in the newly drawn 12th Congressional District was called shortly after the polls closed.

“Well New Yorkers, tonight is a big night,” Nadler said. “I think the voters made themselves clear tonight.”

He gave a victory speech on the Upper West Side Tuesday night that was succinct, subdued and filled with repeated references to the neighbors who helped deliver him what will likely be another term.

“This place is my home,” he said. “I have lived for my entire adult life. I love the people of this community and what they represent. Why would I want to be any place else?”

Nadler won nearly 56% of the vote; Maloney had 24.1% of votes and Suraj Patel had 19.1% of votes, according to results released by The Associated Press.

“I am thrilled that we were able to win while remaining committed to our principles of kindness and progressivism,” he said.

Nadler also commended his rivals in the primary, Maloney and their challenger Suraj Patel.

“I speak for everyone in this room tonight when I thank her for her decades of service to our city,” Nadler said, adding that the two worked together to better New York and the nation.

In his victory speech following a bitter race against @RepMaloney, @RepJerryNadler thanked his soon-to-be former colleague for her "decades of service to our city." pic.twitter.com/HlBQj96WRx

In her concession speech in Chelsea, Maloney listed her accomplishments including her fight for health care for 9/11 first responders and against predatory credit card practices. And she noted the importance of women in elected leadership roles.

“We must move forward and build on their legacies,” she said of trailblazers like Shirley Chisholm, “continue to open doors, end all forms of discrimination and smash glass ceilings. We must continue to be un-bought and un-bossed.”

Maloney is now forced into early retirement. During the final days of campaigning, she criticized Nadler for benefiting from an "old boys" club, implied that he wasn't physically able to do the job and said he hadn't done enough for women's rights.

She sounded a different tune during her concession speech.

“He’s a distinguished member of Congress,” Maloney said, adding that she called him personally to offer her congratulations. “I share his progressive values and I wish him every success.”

“During her three decades in the House, Chairwoman Carolyn Maloney has been a deeply respected leader in our Caucus and a champion for integrity,” she wrote in a statement. “Her longtime public service will be profoundly missed in the Congress and by her constituents and the country.”

“His leadership has been essential to advancing many of our key priorities For The People, whether welcoming immigrants to our country, protecting a woman’s right to choose or passing voting rights legislation,” Pelosi continued to congratulate Nadler on his win. "Our Caucus, the Congress and the Country will greatly benefit from his continued leadership.”

Patel, the third-place finisher, lost his third bid for Congress.

“Our city needs leaders like him, pushing its leaders to meet their needs of tomorrow,” he continued.

“Generational change isn’t about age,” Patel said Tuesday night, who has argued that experience hasn’t always translated to effectiveness. “It’s about the fact of life that the challenges we meet change, so do the leaders required to meet them.”

Nadler received endorsements from The New York Times editorial board, Senate Majority Leader Charles Schumer and Massachusetts Senator Elizabeth Warren, but his supporters and surrogates said it was his loyal base on the Upper West Side who boosted him to victory.

She said there has long been a deep well of support for Nadler.

“I’m humbled that so many New Yorkers found themselves moved by the same belief in principled progressivism,” Nadler said.

He said he plans on returning to Congress with a mandate to “fight for causes so many of us know to be right.”