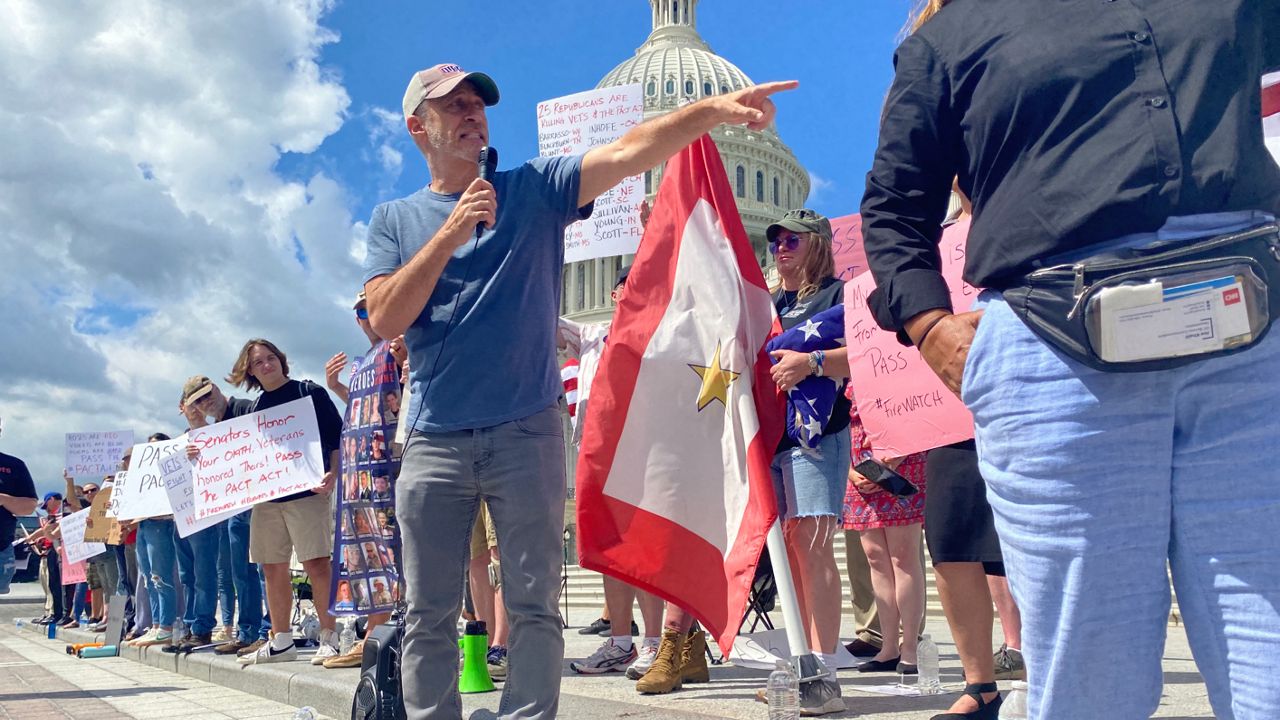 Comedian and activist Jon Stewart speaks at a rally urging lawmakers to pass the PACT act in front of the U.S. Capitol in Washington. (Spectrum News / Matt Ford)

The U.S. Senate on Tuesday approved a bill aimed at expanding health care for millions of veterans exposed to toxins after Republicans blocked a procedural vote to advance the bill last week.

The PACT Act, which seeks to provide benefits to Afghanistan and Iraq War veterans suffering from burn pit exposure toxins as well as Vietnam War-era veterans, passed by an overwhelming margin, 86 votes in favor, with 11 votes against.

"This is a good day, a long awaited day, a day that should have happened long ago," Senate Majority Leader Chuck Schumer, D-N.Y., said in his remarks immediately preceding the vote. "Today we tell our veterans suffering from cancer, lung disease, and other ailments: no more pointless delays on getting the healthcare that should have happened long ago."

The Promise to Address Comprehensive Toxins Act, also known as the PACT Act, would greatly expand eligibility for free medical care through the Department of Veterans Affairs for veterans who have been exposed to toxic chemicals.

Over the last two decades, it has been reported that around 3.5 million post-9/11 combat veterans may have been exposed to dangerous chemicals while in the line of duty, according to the Senate Veterans Affairs Committee.

With 60 votes needed to advance, the outcome of the vote last week was 55-42, with 25 Republicans who supported a previous version of the bill changing their vote to a ‘no’.

Republicans over the weekend defended the decision to delay passage of the bill, with Pennsylvania Sen. Pat Toomey accusing Democrats of trying to "sneak in something completely unrelated that they know could never pass on its own."

Toomey, who led a group of Republicans in delaying passage of the bill, told CNN's "State of the Union" on Sunday that they are "not opposed" to the contents of the bill, but rather object to the funding. He wants to push for an amendment on the bill that would make the bill's funding go from mandatory spending to the annual appropriations process that Senators must vote on each year.

"What I’m trying to do is change a government accounting methodology that is designed to allow our Democratic colleagues go on a unrelated, $400 billion spending spree," he told CNN.

But Montana Sen. Jon Tester, Chair Senate Veterans' Affairs Committee, told CNN that he disagrees with Toomey's accusation, arguing that his fellow Democrats are not trying to pull "a fast one."

"I think that veterans who serve this country are pretty important because they fight for our freedoms, and they make sure that we are safe and secure," he told the outlet. "And when it takes time to take care of them, we got to step up and do that. That is the cost of war."

The Pennsylvania Republican, who is retiring at the end of his term, said it had nothing to do with the agreement struck between Leader Schumer and West Virginia Sen. Joe Manchin on a Democrats-only climate change and inflation-fighting bill.

"That's so absurd and dishonest for anyone to suggest that it has anything to do with BBB," Toomey told CNN's Jake Tapper, referring to the name of a previous Democrats-only proposal for a social spending and climate funding bill. "Who knew about BBB, you know, previous weeks when I've been raising this issue for all this time and I'm very clearly on record about this. So someone has to be willfully ignorant of the facts or dishonest."

Despite the objection, key members of Senate Republican leadership, including Minority Leader Mitch McConnell, R-Ky., and Minority Whip John Thune, R-S.D., predicted that the bill will ultimately pass in the coming days.

"These kind of back and forths happen all the time in the legislative process," McConnell told reporters on Tuesday. "I think in the end the veterans service organizations will be pleased with the final result."

His expected result came after three Republican-submitted amendments to the bill — proposed by Toomey, Blackburn, and Sen. Rand Paul, R-Ky. — were defeated. Those amendments, Schumer said at a press conference, would be voted on as part of a deal that ensured the passage of the PACT Act.

On the Senate floor on Monday, Schumer said that they are "going to give Senate Republicans another chance to do the right thing, to work with us so we can send this bill to the president's desk ASAP."

"Our veterans have already given they're all to defend our nation from threats abroad," Schumer said. "They shouldn't have to fight a second war here at home just to get the health care benefits they rightfully deserve. These brave Americans sacrificed everything. They risked life and limb and the very least we can do as a country is to ensure they receive top care."

“Our veterans who got sick from toxic exposure in the line of duty must get the health care they need and deserve,” Schumer wrote in a Twitter post on Sunday.

I’m standing with NY veterans to announce that despite the Senate GOP effort to prevent the PACT Act passing last week:

There will be a new Senate vote this week.

Our veterans who got sick from toxic exposure in the line of duty must get the health care they need and deserve. pic.twitter.com/SNC3Axy5Vp

“Every minute we delay passing the [PACT Act] is another minute lost to the diseases that are killing our veterans,” said fellow New York Sen. Kirsten Gillibrand, one of the bill’s key backers.

Many veterans spent the weekend protesting outside of the U.S. Capitol in an effort to try and pressure lawmakers to support the bill.

"My suggestion to this Senate would be: When you come back, if all the members aren't here, keep the lights on, keep the doors open and don't leave herre tonight until you do the right thing by these folks," Jon Stewart, the iconic comedian who has pushed to pass this legislation, said Monday in front of the Capitol. "Simple as that, don't make this harder than it is. That's it."

Jon Stewart is back outside the Capitol advocating with veterans for passage of the #PACTAct. @jonstewart @Burnpit360 pic.twitter.com/jGpWJbaahi

"We're not leaving!" a member of the crowd shouted back to Stewart. "Pass the PACT Act!" cried another.

Jen Burch, an veteran who told Spectrum News that she was exposed to burn pits while serving in Afghanistan, called last week's vote "disheartening."

"It’s been an incredibly frustrating few days," she told Spectrum News. "Sitting in the chair watching Senator by Senator flip their vote." 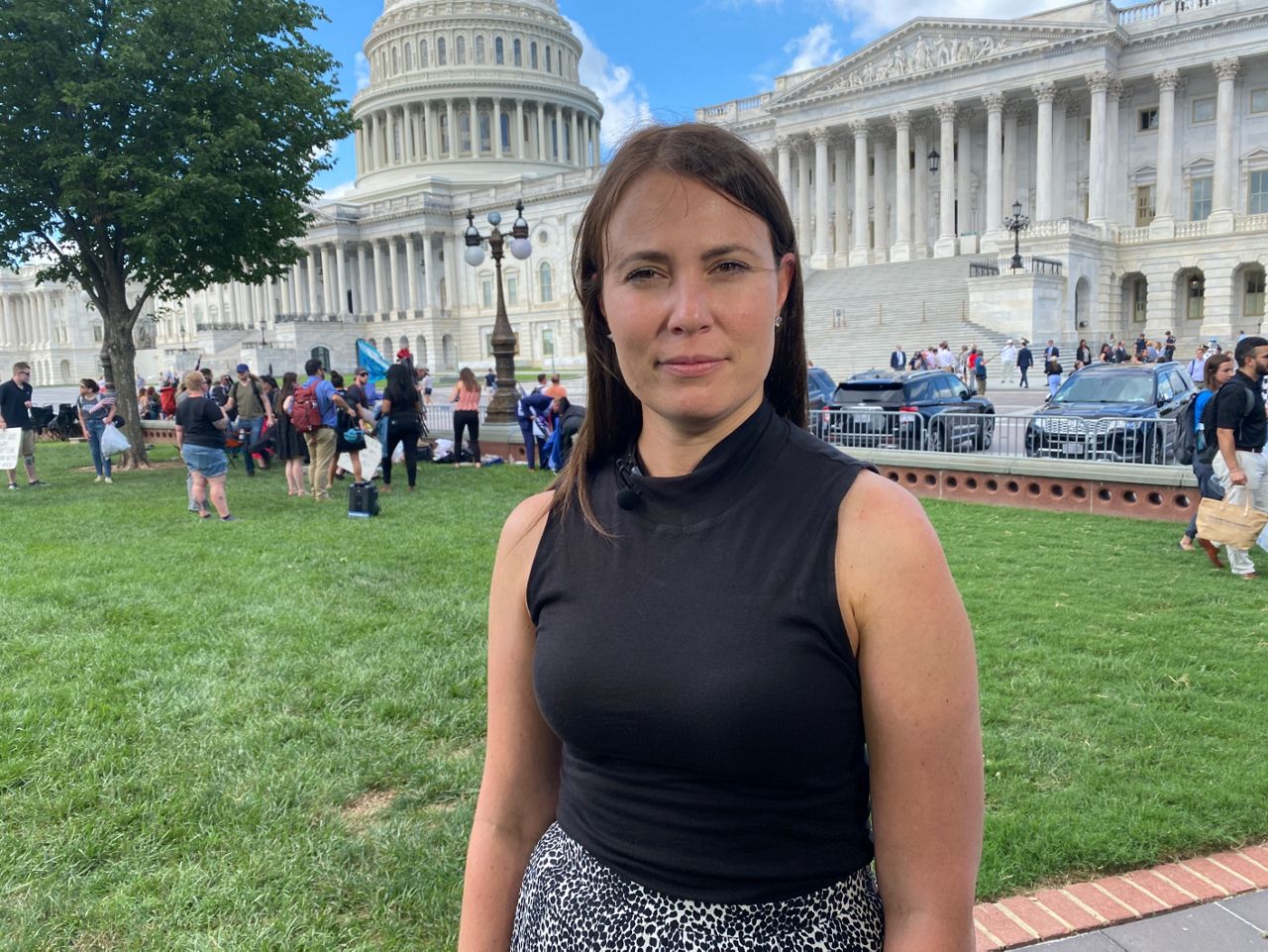 Burch spent Monday walking the halls of Congress in an effort to lobby lawmakers to pass the bill.

"We’re really here to ask for their support once again and to get this PACT Act passed once again before summer recess," she said.

The bill carries the strong backing of the Biden administration. On Saturday, President Joe Biden, who is still isolating after testing positive again for COVID-19, had a FaceTime conversation with the protesters camping outside the Capitol. Veterans Affairs Secretary Denis McDonough brought the group pizza and the phone connection to talk with the president.

Biden on Saturday thanked the protesters for their "heart" and "soul" in fighting to get the bill passed: "America has a lot of obligations but only one truly sacred obligation, and I mean this from the bottom of my heart: That is to care for those and prepare those we send to war, and care for them and their families when they come home."

I'd planned to stop by the Capitol and visit families fighting to pass burn pits legislation. COVID got in the way, so I FaceTimed them and sent some pizza.

It’s our sacred obligation to care for our veterans. I won’t stop fighting alongside them to get this bill passed. pic.twitter.com/6vURnVSuC9

"As long as I have a breath in me, we're going to fight to get this done," Biden promised the group.

"This has been the No. 1 priority for President Biden," McDonough told CNN on Sunday. "These folks have waited long enough. Let's just get it done, and also let's not be for a proposal that places artificial caps on year by year, and then functionally, at the end of those 10 years, makes this fund go away. Let's not sign up to that, because at the end of the day, the risk of that is going to be rationing of care to veterans."

Spectrum News' Anna Betts and The Associated Press contributed to this report.