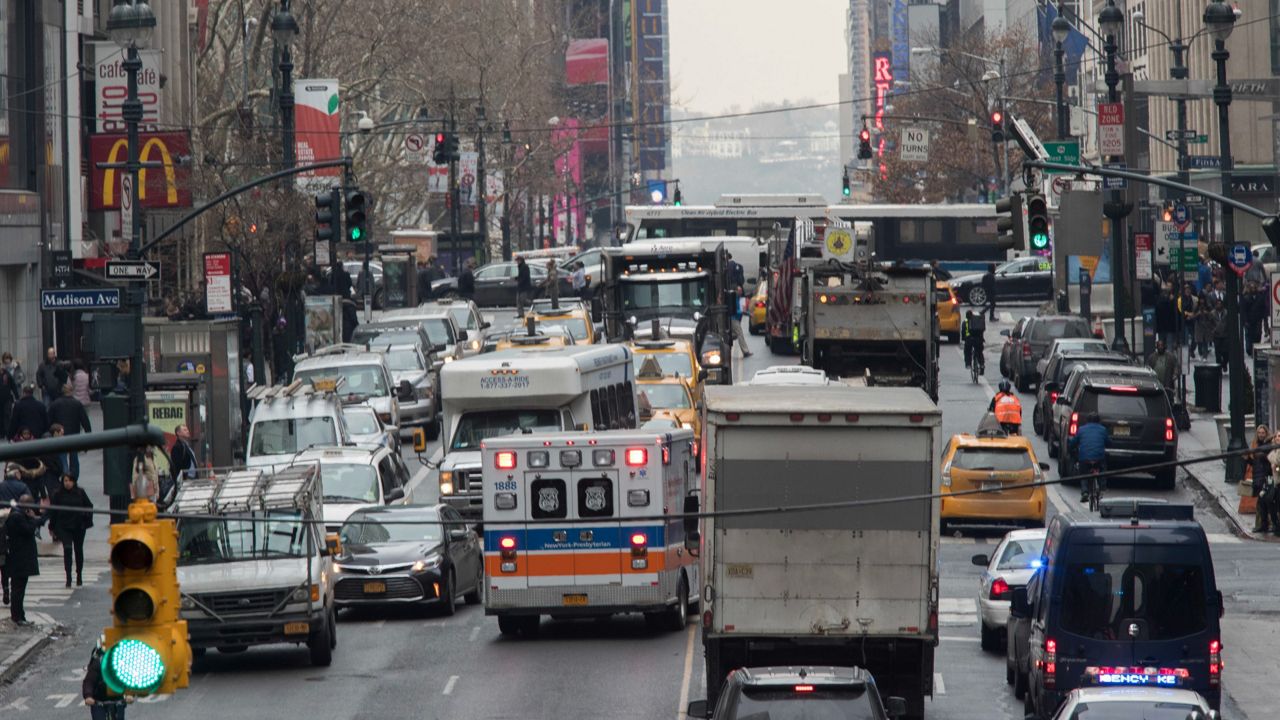 In this Jan. 11, 2018, file photo, an ambulance is seen driving in the wrong lane to get around traffic on 42nd Street in New York. (AP Photo/Mary Altaffer, File)

Congestion pricing a no-go 'over the next year,' Hochul says

Congestion pricing will not be rolling out in New York City within the next year, Gov. Kathy Hochul said Tuesday, citing “hurdles” that have arisen amid talks with the federal government.

“I support congestion pricing, but we’ve been in negotiations with the federal government, that has the say on the next step, and they have now put some other, I would call them hurdles, in the way that we have to overcome,” Hochul responded. “So this is not going to happen over the next year, under any circumstances. But now is not the right time.”

Pressed by moderator Marcia Kramer to say how long its implementation would be delayed, the governor said she could not provide a timeline.

“I don’t have the answer. We’re in conversation with the federal government,” she said. “They just asked us to deal with an additional environmental issue, so I don’t think it’s going to be before the end of the year. I’m rather certain of that.”

“So we’re asking them for a time frame, but we’re on a path, and now we have to address their concerns, and they’re flags that they’ve raised,” she added. “So we’re committed to getting it done.”

Hochul’s gubernatorial rivals, Rep. Tom Suozzi and Public Advocate Jumaane Williams, shared opposing views on the issue, with Suozzi saying the plan should be “postponed for at least a year” and Williams maintaining the city “should do it now.”

While state lawmakers approved a plan to charge drivers who enter Manhattan below 60th Street a fee back in 2019, its rollout has been delayed several times, first by federal funding issues and then by an MTA-led environmental assessment.

“What we already have is failure. Postponing congestion pricing is subsidizing failure instead of investing in options for all New Yorkers,” Danny Harris, Transportation Alternatives Executive Director said.

There are worries that charging a fee to drivers on top of the recent spikes in gas prices could be detrimental at a time when Lower Manhattan needs office workers back.

“Subway ridership is at 60%, our car traffic and truck traffic is at 100 or above 100%, so which patient has the need?” Schwartz asked rhetorically.

Former Mayor Bill de Blasio last summer implored the state to enact congestion pricing by the end of 2022, citing an urgent need for the estimated $15 billion the plan would net the MTA over the course of five years, as well as the need to curb rising traffic and gridlock in Manhattan.

“Do I buy that timeline? No,” de Blasio said of the 16-month timeline the MTA set for the assessment. The MTA, for its part, defended the timetable last August, with an MTA senior adviser saying the agency was “mystified by the mayor’s statement.”

Hochul on Tuesday did not provide any additional details about the ongoing negotiations or the “environmental issue” she cited as a stumbling block.

“We are in conversations with the Federal Government. They just asked us to deal with an additional environmental issue," Hochul said.

In a statement provided to NY1 on Wednesday, MTA Chief of External Relations John McCarthy said the agency was “fully committed to congesting pricing, is aggressively working through the federal process and appreciates the governor’s support.”

“We have been vocal about the importance of this program, because in addition to reducing traffic and providing significant environmental benefits, congestion pricing is essential for the funding of major capital initiatives like accessible subway stations, the Second Avenue Subway and zero-emission buses,” McCarthy added.

The MTA is meeting with the U.S. Department of Transportation’s Federal Highway Administration on a weekly basis, “to work through comments provided on the Draft Environmental Assessment,” a spokesperson for the FHWA said Wednesday, adding that the division was “making its staff available to MTA as needed as part of this important effort to ensure that necessary traffic, air quality and other analyses are conducted as required to inform FHWA’s consideration of the tolling program.”

“FHWA will continue to both collaborate with and assist MTA, the City of New York and New York State Department of Transportation and remain committed to arriving at a timely and informed [National Environmental Policy Act] determination on this important project,” the spokesperson added.

“We urge all parties, including the federal government, to move congestion pricing forward promptly, and we look forward to continuing to work with the governor’s office and the MTA to get it done,” the spokesperson said in a statement.