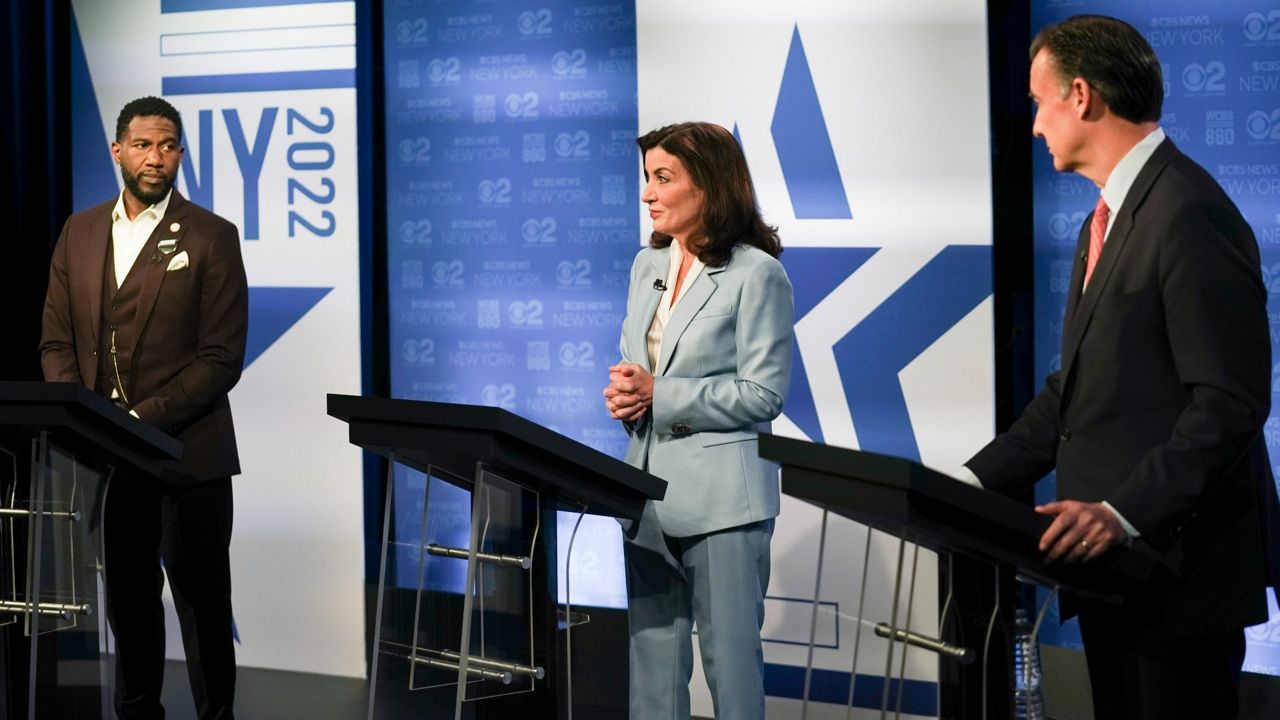 All three Democratic candidates for governor squared off Tuesday in their first debate ahead of the June 28 primary. Gov. Kathy Hochul’s two opponents came out swinging against her, often putting the governor on the defensive.

Right out of the gate, Gov. Hochul was under attack by two rivals who have struggled to gain traction in the race for governor.

“The governor says she cares about crime, she promises to address crime, but she does nothing to fix bail reform,” Suozzi said. “It’s hard to imagine that this governor can continue to say that she cares about crime, but 69% of New Yorkers say she is failing on crime. She says she jumps right in. But when it came to the Buffalo Bills stadium she got something done that nobody thought could get done.”

Hochul says she is proud of what they were able to accomplish on guns.

“When I saw the bill signing yesterday, and it’s already a commercial now, it reminded me of the Cuomo press conferences during the pandemic. And I’ll tell you why. It was in the middle of the Bronx that had some of the highest shootings that we’ve seen. Unfortunately those bills that were signed primarily deal with mass shootings,”Williams said.

The governor was frequently put into the position of defending herself and her record, including the arrest and resignation of Brian Benjamin, who she handpicked as lieutenant governor shortly after taking office last year.

“Let me talk about that lieutenant governor situation because it was very, very disappointing to me that those charges were brought because we worked with the information we had at the time,” Hochul said. “And I promised the voters of New York and the people of this state I’d do everything I can to restore their faith in government. And that was a setback.”

Hochul has looked to ensure women that they will continue to have abortion rights in New York, even after a leaked Supreme Court draft opinion showed the high court was considering overturning Roe v Wade.

But Suozzi pointed out that Hochul failed to secure a constitutional amendment guaranteeing the right to abortion in New York state, despite running ads giving the impression that she would.

“I will tell you that I don’t think that the right to have an abortion should be reserved only for wealthy women,” Hochul shot back. “That is why I don’t know how I think you can hide from the Hyde amendment to support denying Medicaid services and funding for poor women.”

The candidates were also asked their positions on congestion pricing, which is expected to eventually charge drivers entering Manhattan below 60th Street.

Williams said it should be implemented right away, Suozzi said delay it one year, and Hochul said now is not the time, but it will get done eventually.

Should non-citizens be allowed to avoid all over the state, as was recently passed in New York City?@JumaaneWilliams - Yes. Non-citizens should be engaged @Tom_Suozzi - No. Voting should be reserved for citizens @GovKathyHochul - I respect localities, but not statewide