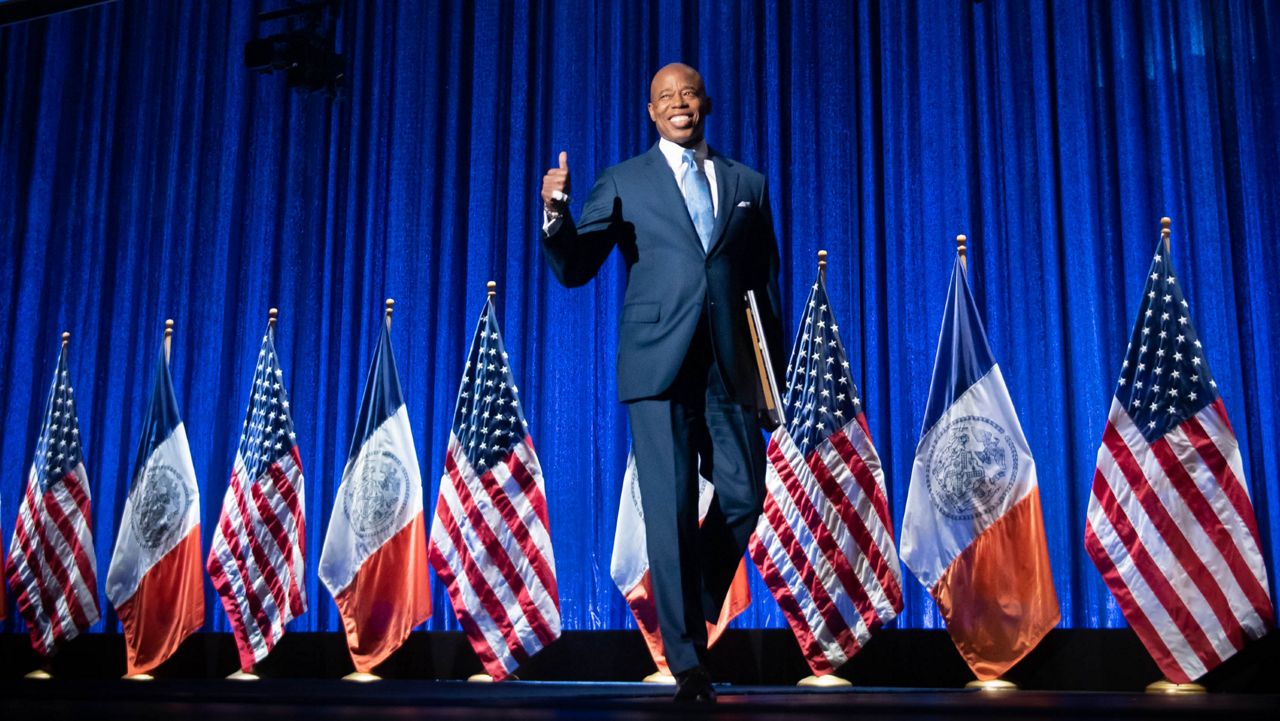 Mayor Eric Adams has outlined his latest version of the city’s next budget, revising from a preliminary spending plan released earlier this year to include more social services, renew organics recycling and boost funding for public safety initiatives.

In a speech delivered at Brooklyn’s Kings Theater, Adams billed the budget as one that makes historic investments in public housing and career development initiatives, while reining in spending in anticipation of pandemic-era federal funding expiring at the end of this year.

“It all comes down to this: safety, jobs, schools, and housing,” Adams said. “It sounds simple, radically practical. But it is the work of many hands, many minds, many years.”

Adams’ budget for 2023 comes in at $99.7 billion, $1.2 billion larger than his preliminary budget and one billion dollars more than the agreed budget for the current fiscal year.

This latest budget is not the final document; Adams’ administration and City Council leaders will need to negotiate the final numbers ahead of the start of the next fiscal year, on July 1.

Yet the executive budget, as this version is referred to, includes additional spending for several requests from the council.

Despite Adams’ professed interest in being fiscally restrained — “radically practical,” as he termed it in his speech — the executive budget adds to outyear spending gaps (deficits between projected spending and expected revenue). While this budget projects no gaps for fiscal year 2023, for the three years after that the combined gaps are now about $3.1 billion larger when compared to Adams’ preliminary budget released in February of this year.

In a statement on the new budget, the nonpartisan Citizens Budget Commission called the rainy day fund contribution “modest,” and noted that the revised budget eliminated savings that were created in the preliminary spending plan by adding back thousands of vacant positions.

“Spending more now is seductive, but shortsighted,” Andrew Rein, president of the commission, said in the statement. “Without increasing productivity or shrinking lower priority programs, the City may be on a path to massive service cuts or harmful tax increases when the next downturn arrives.”

In a media briefing after his speech, Adams said the gaps were “manageable,” and that the administration would consider requiring additional cuts to agency budgets if it saw the need to do so.

“​​Let's be clear, New Yorkers: There is no dignity in sleeping on the streets,” he said.

The new budget proposes spending $171 million for 1,400 beds for homeless New Yorkers. The beds, many under the city’s Safe Haven program, are not in private rooms.

“Let me tell you: It’s gonna be hard for people to hate me, because we have been listening to those on the ground,” Adams said while discussing his plan for expanding access to shelter beds for homeless city residents.

In a statement on the budget, Comptroller Brad Lander said that the added beds need to be private “if we are to truly address the needs of unsheltered New Yorkers.”

The city will also spend $55 million to expand a subway safety initiative that deploys mental health professionals, instead of police, to address people experiencing mental health crises. With the added funding, the program will operate in Central Brooklyn, Eastern Queens and uncovered areas in the South Bronx.

In the media briefing, Adams pushed back on the suggestion that he had included new funding for social services programs in order to placate City Council members who would be frustrated with his expanding the police budget, saying that these were policies he fought for as a state senator and a police officer.

“I'm not placating. I’m placating Eric,” he said. “I’m finally the mayor that can put the investments that I fought for for 32 years.”

The Department of Social Services’ budget is $10.88 billion, down from $11.24 billion in last year’s adopted budget.

The new budget increases the police department’s budget to $5.59 billion, up from an adopted budget of $5.44 billion in the previous fiscal year.

The increased spending will go primarily to changes to detectives’ pay; for overtime; and to fund new initiatives, like the revamped anti-gun teams, Adams said in a media briefing after his speech. The increase is at odds with many City Council members’ efforts to decrease spending on police and increase spending on education and health and social services.

“This is not spending, this is investing,” Adams said. “A safe city is going to be a productive city.”

Adams said that his administration would do a “deep dive” on the department’s use of overtime, which last year pushed the NYPD’s actual spending hundreds of millions of dollars above its adopted budget.

At a hearing of the City Council’s public safety committee in March, NYPD officials said that the anti-gun units would need $2.5 million for new vehicles, but that they did not have an estimate for overtime costs.

Lander criticized the budget for adding 578 new correction officers. The budget adds new officers, Lander said, “without making urgent reforms to the staffing management failures that have left our jails in crisis with nearly a fifth of officers calling out sick each week.”

In the briefing, Adams defended the added correction staff as necessary to provide personnel to nine new — and controversial — “punitive segregation” units on Rikers that will replace solitary confinement. The new units isolate prisoners but Adams has said they will allow for more time out of the cell than solitary confinement.

Adams also said that the police department will be increasing enforcement measures on people who attempt to ride public transit without paying the $2.75 per-ride fee. That will mean more summonses for fare-beating and arrests for repeat offenders.

The mayor also said that he is not expanding the police presence in the subways, and plans to crack down on transit police who are tasked with patrolling stations and train cars but instead talk to one another or look at their phones.

“We are going to start taking very aggressive actions to make sure our police are patrolling our subway system and not patrolling their iPhone,” he said.

The city’s budget for education is smaller than the last fiscal year — $30.95 billion compared to $31.97 billion — but the cuts will not impact the quality of education, Adams said.

“All of our agencies are struggling right now to get people to take the jobs,” Adams said.

Adams said that he and Chancellor David Banks are looking at ways to increase the use of school buildings throughout the day, and attract back some of the thousands of students who have left the public school system.

The new budget also adds money to allow 10,000 more children to enroll in the city’s summer learning program, Summer Rising, bringing the total capacity of the program to 210,000 slots.

In his statement on the budget, Lander said the education department needed to show its plan for spending unused federal dollars from pandemic-era stimulus bills.

“The Department of Education has billions of dollars intended for student recovery that remain unspent, and this budget does not include a clear action plan for how to make the best use of these funds,” Lander said.

Adams proposed spending an additional $5 billion for affordable housing over the next 10 years, including $3.6 billion in subsidies for housing and $1.2 billion for a NYCHA program that converts developments to federally funded housing managed and maintained by private firms.

Adams billed the capital funding for affordable housing as the city’s biggest investment in housing in a generation, although as a candidate he promised to spend $4 billion annually on housing.

NYCHA has estimated its backlog of repairs as costing about $40 billion.

“I’m confident at the end of my four years of my administration we’re going to be hitting the targets that we deserve,” Adams said at the briefing.

The new budget will also expand collection and drop-off sites for organic waste at schools as part of a $35 million city-funded compost operation; Adams had cut a proposed expansion of the compost program in his preliminary budget earlier this year.

The restored funding, which will place food waste drop-off sites at every city school over the next two years, came after the City Council included the expanded compost program in their response to Adams’ preliminary budget.

A report from the city’s Independent Budget Office found that creating a city-wide composting program, with universal pickups across the five boroughs, could lead to $33 million in annual savings. The projected savings would come from negotiating lower prices for larger volumes of compost with contractors running the organics recycling program.