Andy Humm had been marching in New York City’s annual Pride march for more than six years when he noticed a shift.

It started around 1982, shortly after Charles Cochrane, an NYPD sergeant, had come out as gay at a City Council hearing.

Humm, a long-time activist and journalist, remembers the police presence as “looser” back when he first started protesting, but when GOAL joined the march, he began noticing the tension from the cops patrolling on the periphery.

“They were furious that there were gay cops out there, and they turned their backs on these guys,” Humm said. “In those days, they were there on almost every street corner and I think they kind of sent the word up and down the line.”

It’s between marchers who view cops in uniform as potential threats and symbols of brutality and those participants who want the NYPD to have a role in Pride.

“We’re one big family and right now one part of the family makes another part uncomfortable,” said André Thomas, co-chair of Heritage of Pride, the organization that runs the annual Pride march. “So what do you do? Do you cater to the part of the family that is made to feel uncomfortable about the presence of another? That's what we're trying to do.”

That’s the reason why Pride announced last month that police officers would be banned from marching in uniform at the annual march until 2025, although the bulk of their programming, including the march, will be virtual this year due to COVID-19.

The move is part of an overall effort by the organization to reduce police visibility at the event, including increasing their reliance on private security, disallowing law enforcement and correction officers from exhibiting as vendors, and requiring NYPD officers to stay a block away from the edge of all in-person events.

But critics of the announcements, particularly officers in the Gay Officers Action League, say the move only serves to exclude a portion of the LGBTQ community that won the right to march years ago. 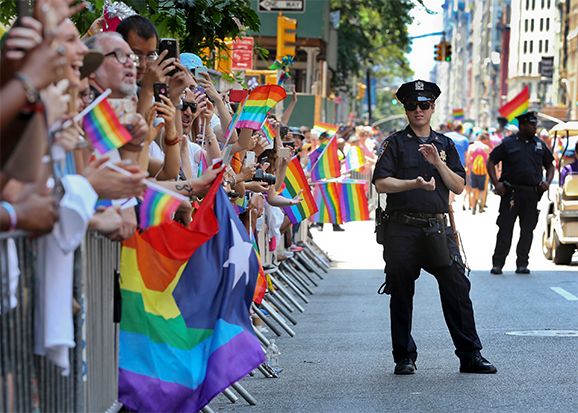 The origins of Pride

In 1969, the spark for the modern LGBTQ rights movement was lit when a police raid on Stonewall Inn was met with impassioned resistance.

This led to the Christopher Street Liberation March, which was taken over years later by Heritage of Pride.

“There was certainly a great anti-authoritarian streak in the beginning of this march,” Humm said. “They didn't even let politicians speak at the rallies. It was for the community.”

When Cochrane stood up and outed himself at that City Council hearing in 1981 and started marching alongside fellow gay officers in Pride, it was considered by many to be a brave move.

“In the beginning, the community was very supportive of cops coming out because we hated the cops,” Humm said. “They were our enemies. They were the people who arrested us.”

But as Pride continued throughout the years and the LGBTQ community gained more acceptance the event swelled with more participants, more corporate sponsors, and, of course, more gay officers.

“Gay cops are celebrated,” Thomas said. “Being a gay cop — you can dance in the march. They're not oppressed. They're insiders.”

In 2019, thousands of people took to the streets for the first Queer Liberation March, a march held without permits and without any corporate sponsors.

The march, now in its third year, came to life after factions within the main Pride organization felt their complaints about the role the NYPD played in providing security and the corporatization of the event were going unheard by their fellow organizers.

It’s why this recent move by Heritage of Pride doesn’t come as a surprise to them.

The banning of uniformed police officers at the event is considered by activists such as Walker as a small first step in taking the march back to its radical roots.

“We reflect the intersectional nature of progressive activism today, that is also, in many ways, a reflection of the tenor of the time in the late ‘60s, early ‘70s, when activist organizations across racial and ethnic and sexual lines were all sort of coming together,” Walker said, adding that the intersectionality of Black, Indigenous, People of Color within the LGBTQ community is a priority for the march. 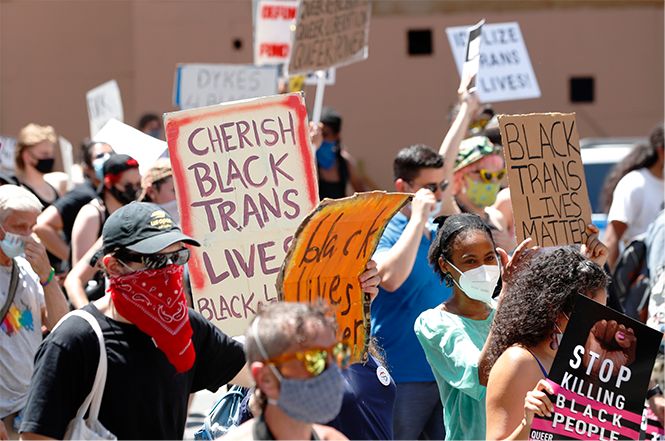 But for officers in GOAL, the police ban is antithetical to that sentiment.

Jason Samuel, an NYPD officer and member of GOAL, has marched in Pride for seven years alongside his husband. It’s an event that brings his whole family out as well.

“It's an occasion that we look forward to,” he said. “And for GOAL, it's the culmination of a very long, very active month.”

Heritage of Pride and the NYPD have tried to reach a compromise on reducing police visibility, according to Thomas.

But any discussion that involves banning officers from participating in uniform is non-negotiable for the organization, Samuel said.

“It really shouldn't be part of a concession,” he said.

What’s more, the ban is considered by opponents a regression for LGBTQ officers — particularly BIPOC officers.

“[HOP] doesn't have a monopoly on speaking for trans and BIPOC members of the LGBTQIA,” said Samuel, whose father immigrated from Trinidad and whose mother is African American.

But another point of contention is that GOAL as an organization has remained reluctant to speak out publicly on issues, including against police brutality.

“You’ve got to start holding the leadership accountable and doing better,” Thomas said. “If you're not going to hold yourself accountable, have you earned the right to have that visibility? I think not wearing a uniform is a small price to pay for some of the real abuses.”

When faced with that type of critique, Samuel points out the internal reforms pushed by GOAL for LGBTQ officers, including sensitivity training for new NYPD recruits at the academy.

“Real change doesn't necessarily happen only on social media,” he said. “It happens in the academy classrooms and in the police commissioner's conference room.”

But for many LGBTQ activists, the apology and the reforms by GOAL, are considered too little, too late.

For instance, a recent study by the UCLA School of Law Williams Institute found that “LGBQ people are six times more likely than the general public to be stopped by police.”

“There’s been thousands of police abuses against gay people since Stonewall,” Humm said. “Thousands of cases of entrapment of gay men that still goes on today. There's been no reparations for any of these things that the police do to gay people constantly.”

Still, as the Heritage of Pride’s march this year remains virtual due to COVID-19, some are skeptical that the ban will remain in place. And Heritage of Pride has maintained that its door is always open to conversations with GOAL.

“There’s a whole year between now and next June,” Walker said. “Because their decision really doesn't apply until next year's parades, anything can happen between now and then.”