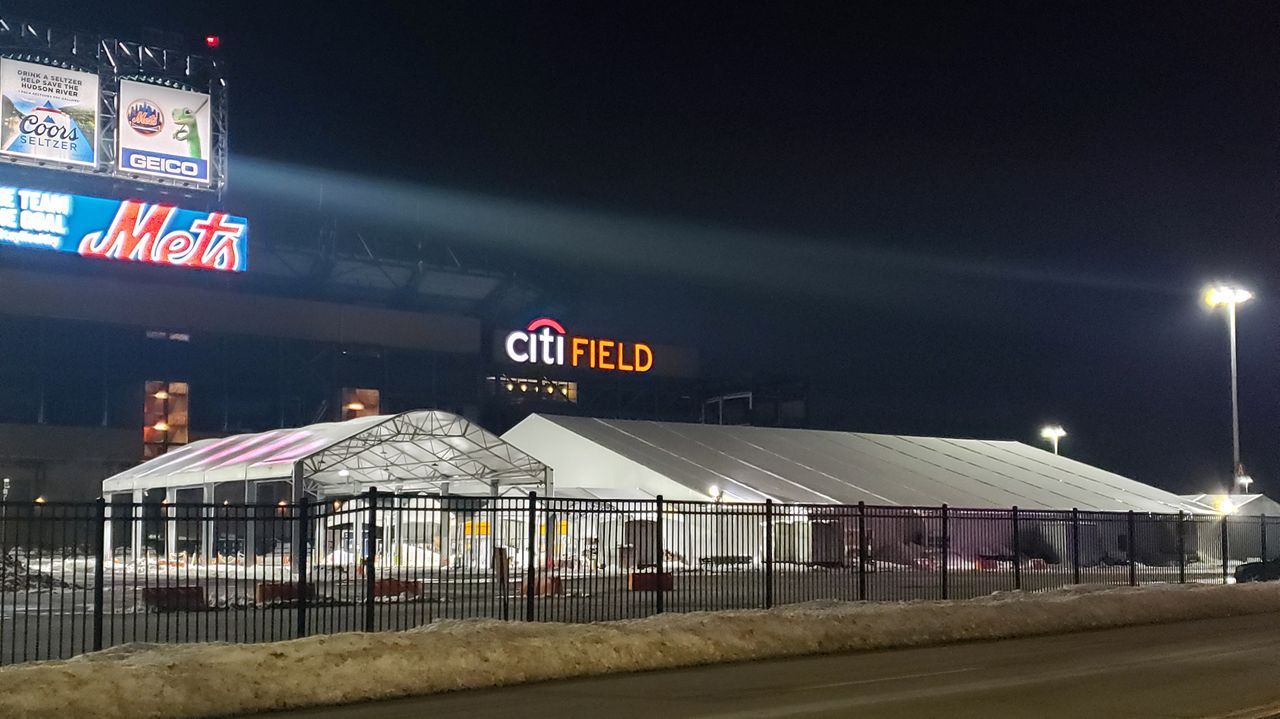 NEW YORK — Citi Field, the home of the New York Mets, will open as a vaccine hub on Wednesday, Mayor Bill de Blasio announced at a Monday morning press conference.

De Blasio had planned to open the stadium as a 24-hour vaccine hub in January, but the opening was delayed due to low COVID-19 vaccine supply, he said.

The site, located in Flushing, Queens, will reserve half of its appointments for residents of the borough. The other appointments will go to food delivery workers and drivers licensed with the Taxi License Commission, including yellow cab and Uber and Lyft drivers.

The site will be open 24 hours a day.

The site focuses on Queens residents, de Blasio said, “to make sure we reach deep into that borough that was hit so hard by the coronavirus.”

Queens has had the second highest rates of deaths and hospitalizations due to COVID-19 of the boroughs, after the Bronx, according to city data.

Taxi drivers NY1 spoke to Monday evening said they're eager to get their shot.

"I'm trying to protect myself and protect my family so that I don't spread the virus, so I think everybody who has the same mindset, they'll take the vaccine," said Francis Anyimadu, a taxi driver.

Some drivers were split on whether the stadium, out in Flushing, is convenient.

"Of course. I always go to Brooklyn and stuff like that so I'm always around all over New York City, so anywhere," Anyimadu said. "I go to JFK, LaGuardia often, so I can do it."

Taxi driver Jacob Apoh, however, said the half-hour ride to Citi Field from Manhattan is inconvenient.

"It's not convenient for me, but I don't have any choice," Apoh said. "I live in Jersey and I work in the city, so I just don't know, but whenever appointment, I'm going to take it."

Citi Field is set to open less than a week after Yankee Stadium, in the Bronx, became a vaccine hub focused on residents of that borough.

On Friday, NY1 reported that the website for making an appointment at Yankee Stadium, whose vaccine operation is run by the health services provider Somos Community Care, lists two fields regarding health insurance as “required” fields. Users cannot make appointments without filling in those fields.

The mayor has repeatedly stressed that city residents do not need health insurance to receive a vaccine.

At the press conference, de Blasio said that any indication from vaccine screening tools that health insurance is required to get immunized could be misleading city residents.

“Asking for health insurance info if people have it is understandable,” he said. “If it in any way suggests that people can't get the vaccine without health insurance, that is a problem.”

In the case of the Somos website, users can fill the insurance fields with “n/a” and continue with scheduling their appointment, although there is no indication that that is allowable on the website itself.

De Blasio said that the city would work with Somos to make sure that its scheduling website did not give residents the impression that they need health insurance to get vaccinated.

On Monday afternoon, Anel Pla, a spokesperson for Somos, said that the organization was in the process of "adding an explicit 'no insurance' button to the portal – if patients answer ‘no,’ insurance fields do not need to be completed and they can proceed."

Pla said that the insurance fields were included in the vaccine scheduler in the first place at the city's request, to comply with rules from the Federal Emergency Management Agency that require the city ask residents for insurance information in order to be eligible for reimbursements for the vaccine effort.

Vaccine sites run by New York City Health + Hospitals, the city-run health system, have not heard complaints from people seeking the vaccine who do not have insurance, said Dr. Mitchel Katz, president of the agency.

“We make it very clear: if you have insurance we take the information, if you don’t you have the same access to the care,” Katz said at the press conference.

Meanwhile, supply of the COVID-19 vaccine in New York remains the overarching obstacle as the state will continue to receive about 300,000 doses a week, Gov. Andrew Cuomo said Monday.

At that rate, the pool of eligible New Yorkers to be vaccinated will take "months and months," he added. There are now more than 7 million who are eligible to be vaccinated in the state, and people with comorbidities like cancer, HIV/AIDS and diabetes will be able to sign up for appointments starting Sunday.

The governor said people with comorbidities will be asked to supply proof of their illness in the form of a doctor's note or medical information that "evidences that they have this comorbidity." People can also sign a certification upon getting the shot.

The governor warned there will likely be fraud, mistakes and inefficiencies, and that the state will audit to make sure the rules are being followed.

Given the supply shortage, the administration warns it will be tough to get an appointment.

New York has already used about 90% of its overall dose allocation for the week.

"We get a supply on a weekly basis," Cuomo said. "It's Monday; already, 90% of that allocation is done."

The state has sought to prioritize health care workers in the first round of vaccinations, and unused doses at hospitals will be allocated to people with qualifying health issues starting next week.

So far, more than two million doses of the vaccine have been administered in New York, with the vast majority being first doses.

The bottleneck from the federal government has loosened a bit in the last month, when President Joe Biden's administration announced doses to states would increase by about 16%.

"We need an increase in the federal supply," Cuomo said. "The Biden administration has increased the federal supply. We know they're not making it in the basement of the White House. Only the federal government can buy the vaccine. But we need more."