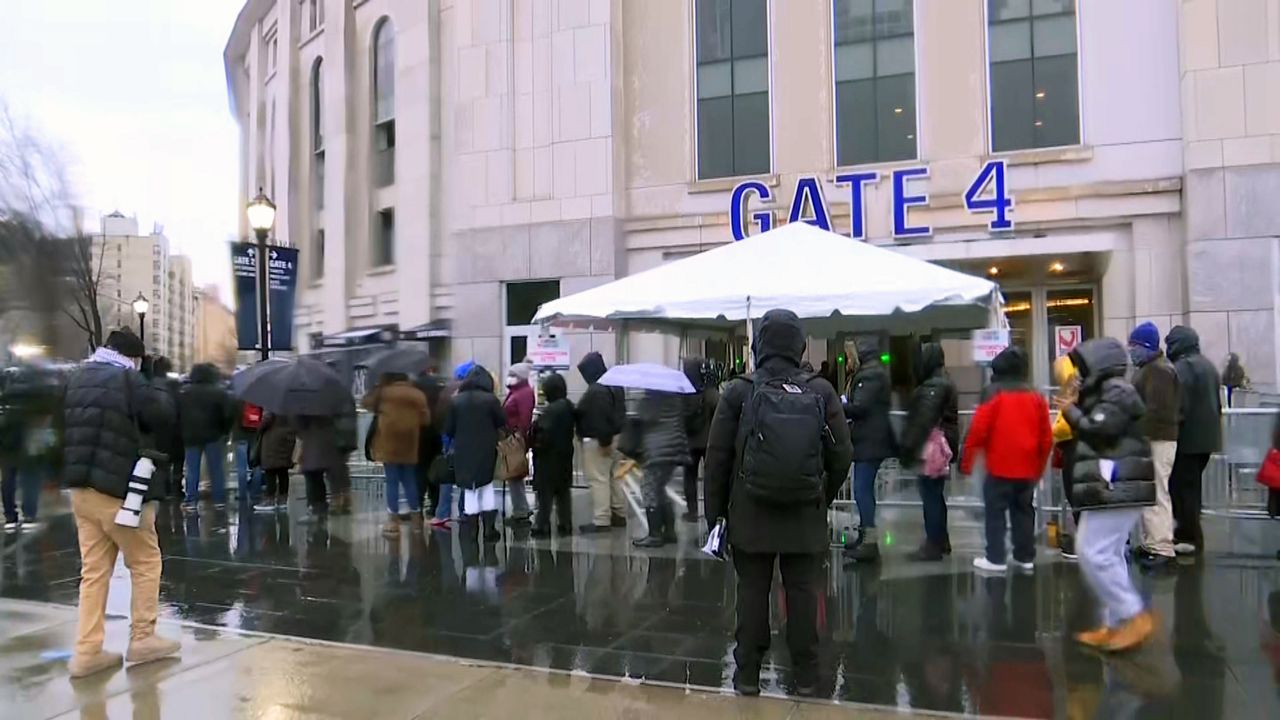 BRONX, N.Y. — The city's newest mass vaccination hub is officially up and running at Yankee Stadium.

The site is open every day from 8 a.m. to 8 p.m. but it's only for Bronx residents who are eligible to get the shot.

The goal is to address the high COVID-19 positivity rate in the Bronx, as well as the racial disparities in the city's vaccine rollout.

"It's opening day for Yankee Stadium, but a different kind of opening day," said Mayor Bill de Blasio at a press conference at the stadium Friday afternoon.

Already, the site has begun filling its vaccine slots, with about 13,000 of 15,000 available slots for the coming week taken as of noon Friday, according to representatives of Somos Communty Care, the health services provider that is operating the site.

De Blasio said that with further vaccine supply from the federal government, the site will transition to operating 24 hours a day.

Appointments are available through somosvaccinations.com or by calling 833-SOMOSNY. You must also bring some form of identification to your appointment.

Yankee Stadium opens today as a mass vaccination site. Council Member Vanessa Gibson of the Bronx tells NY1 15,000 will be vaccinated over the next week. It'll be open M-F from 8 a.m. to 8 p.m. She encourages eligible Bronx residents in the 1A and 1B categories to get vaccinated. pic.twitter.com/gttMw5VR3U

While health insurance is not required to get a vaccine in the city, the Somos sign-up website requires users enter their health insurance provider and insurance number. Without filling out those fields, you cannot make an appointment.

Just under 9% of the Bronx has no health insurance, according to U.S. Census data -- the highest uninsurance levels in the city.

A reporter who tested out the Somos website was able to proceed with the vaccine scheduling process after putting "n/a" in the fields for insurance provider and insurance number.

At Yankee Stadium, de Blasio reiterated that city residents do not need health insurance to get a vaccine, nor do they have to offer any information about their immigration status.

A representative for Somos did not immediately respond to questions about the health insurance issue with the sign-up website.

De Blasio has called the Yankee Stadium site a "game changer" for distributing vaccines in the Bronx. The city came under fire over the past week after releasing data that showed stark racial disparities in vaccine access, particularly for Black and Hispanic people.

According to the city's latest numbers, The Bronx this week reported a 6.33% positivity rate, the highest in the city.