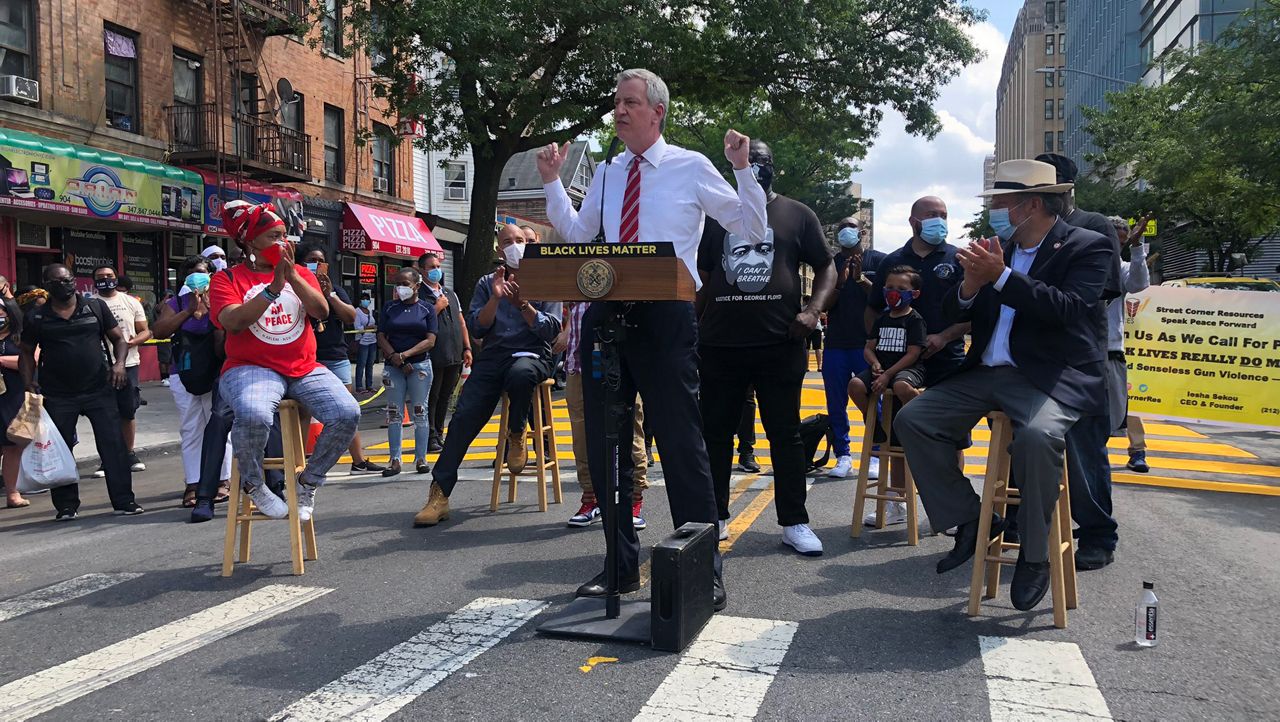 NEW YORK CITY —  Alongside community activists and with a freshly painted Black Lives Matter mural as a backdrop, Mayor de Blasio on Wednesday signed into law a package of police-reform bills.

De Blasio signed the five bills for greater police transparency and accountability as the city faces mounting gun violence and rising tension between the NYPD and the communities it serves.

"I have faith that we're in a moment of history where everyone is ready to do things and do them better, and do things we thought we could not do before. In that spirit, we move forward," the mayor said.

Perhaps the most prominent and controversial among them was legislation criminalizing police officers’ use of chokeholds. City Council member Rory Lancman introduced the bill six years ago after the death of Eric Garner.

“It’s been a six-year journey from when Eric Garner was killed," Lancman said. "And Gwen Carr was fighting every step of the way to make sure there was justice for her son.”

The City Council passed in June the police reform bills that:

The bill signing came as the city sees a surge in gun violence and as tensions flare between the mayor, the NYPD and the community.

NYPD top brass have strongly and repeatedly criticized legislation they blame, in part, for the recent spike in violent crime, with Chief of Department Terence Monahan describing a law barring officers from pushing their knees into suspects’ backs as “insane.”

Police unions have also said the legislation and anti-police sentiment severely curb their ability to do their job and keep the city safe.

The bill signing was held in front of a Black Lives Matter mural being painted on the street near the Bronx Hall of Justice. Similar murals have been painted in other boroughs, including near Trump Tower in Manhattan.

De Blasio earlier Wednesday announced a violence-prevention effort in Central Brooklyn that this weekend will include an increased police presence, peace marches and a resource fair.

Both Bedford-Stuyvesant and Crown Heights - areas where multiple people were recently shot, including a 1-year-old boy who was killed - will see increased policing this weekend as well as a flood of services provided by local anti-violence groups and clergy who will occupy seven “hot spots” in Brooklyn this weekend, the mayor said earlier in the day.

“This is the way forward,” de Blasio said. “We need to have more officers in the right places.”

There will also be peace marches and mobile trauma units, de Blasio said.

“Where there is an uptick in crime, we’re going to have an uptick in services,” said Robert Cornegy, Bed-Stuy’s city council member. “While there are depraved individuals out there, society is responsible for the bullets that were loaded into those guns.”

Ife Charles, of the Center For Court Innovation, will join efforts to amp up local Cure Violence initiatives, which work to deescalate disputes before they become violent, she said.

“This problem can be erased,” Charles said. “We have great people doing the work and it is up to us.”

Also Wednesday, a coalition of police, corrections officers and firefighters’ unions filed a legal complaint against the city seeking to stop what it called a data dump of their information relating to disciplinary matters.

A spokesman with the city law department said the complaint seeks to halt the city’s compliance with a state law requiring increased transparency.

They believe the arguments hold no merit.