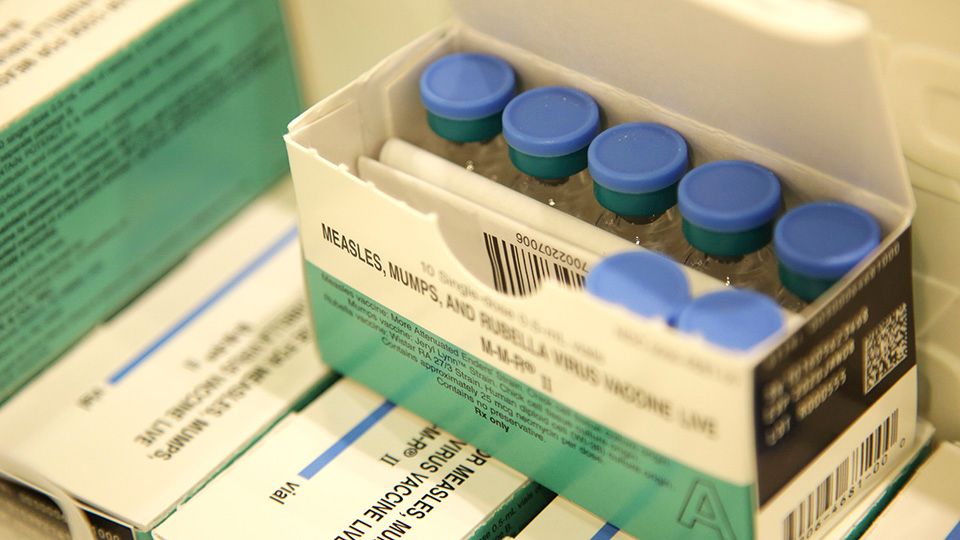 FILE- In this March 27, 2019, file photo, measles, mumps, and rubella vaccines sit in a cooler at the Rockland County Health Department in Pomona, N.Y. Seth Wenig/AP.

What to Know About the Measles Outbreak in NYC

New York City is facing its largest measles outbreak since 1991, with more than 280 reported cases since October. While children can recover, the virus is sometimes fatal.

From symptoms to which zip codes are required to get vaccinations, here is a rundown of what you need to know about the virus.

Measles is an extremely contagious virus, but vaccinations prevent people from contracting it — anyone who receives two doses is "highly unlikely" to get the virus, according to the city health department. Health officials advise that children should get an MMR (measles, mumps, rubella) vaccine at their first birthday and then a second dose before entering elementary school between the age of 4 and 6. If you have an infant, between 6 to 11 months old who will travel internationally with you, they should also get the vaccine.

In addition, anyone born after January 1, 1957 who has not received two doses of a measles-containing vaccine or who does not have a blood test proving that they are immune to measles, should get two doses of the MMR vaccine, the health department says. Two doses of the vaccine are 97 percent effective in preventing infection.

Vaccination is extremely important, especially in a densely populated city like New York. It helps maintain "herd immunity," meaning a large enough percentage of the population is vaccinated against the virus, which helps prevent its spread to those most vulnerable.

New Yorkers are advised to call 311 for more information on the vaccine, including where they can get it.

HOW DOES MEASLES SPREAD?

The measles virus is spread through the air, like when an infected person sneezes or coughs. The virus can be active in the air and on surfaces for up to two hours.

WHO CAN GET MEASLES?

Anyone but measles is more dangerous for infants, pregnant women, and people with weak immune systems.

CAN SOMEONE WHO HAD MEASLES ONCE BECOME INFECTED AGAIN?

No, someone with measles develops immunity and cannot get it again.

WHAT ARE THE SYMPTOMS?

Symptoms generally appear 10 to 12 days after someone is exposed to measles, although they can appear as soon as seven and as late as 21 days after exposure.

Someone with measles can experience:

Among serious complications, 1 in 20 patients get pneumonia, and 1 in 1,000 experience brain swelling that can lead to seizures, deafness or intellectual disability.

While it's rare in the U.S., about 1 in every 1,000 children who get measles dies, according to the CDC.

Before measles vaccination was a part of standard care, most people under the age of 15 got infected and about 400 to 500 people died as a result every year.

No drug exists to treat or cure measles. Some symptoms can be treated, like a fever.

HOW SAFE ARE THE VACCINES?

Medical experts almost unilaterally concur that the vaccines are safe and do not cause autism. The city notes that nine CDC-funded or conducted studies since 2003 have found no link between the vaccines and autism spectrum disorder.

The vaccine can cause some small side effects, such as localized pain, soreness, and tenderness, or a fever that lasts a day at most, but those are the result of the body getting accustomed to the virus and building the antibodies against a more serious threat of the virus.

WHO HAS BEEN MANDATED TO GET THE VACCINE?

Anyone who hasn't received the vaccine is recommended to get it, but New York City declared a public health emergency Tuesday and ordered mandatory vaccinations over the measles outbreak mainly affecting the Orthodox Jewish community in Williamsburg.

The mayor's office has required every person older than six months in the zip codes 11205, 11206, 11211, and 11249 — all in Williamsburg — to receive the measles vaccine. The order applies to anyone living, working, or going to school in the area.

The city's Department of Health and Mental Hygiene will review vaccination records of every person who may have been in contact with measles patients, and Mayor Bill de Blasio says anyone who is not vaccinated could be fined $1,000. The city said Tuesday that it would help everyone covered by the order get the vaccine if they can't get it quickly through their regular medical provider.

In addition, the city has ordered religious schools and day care programs serving Williamsburg to exclude unvaccinated students or risk being closed down.

BACKGROUND ON THE OUTBREAK

As of Tuesday afternoon, 246 of the 285 people confirmed to have measles cases in New York City are under the age of 18. The city says most of those individuals were unvaccinated or were not properly vaccinated.

The city says no one has died from the outbreak but more than 20 people have been hospitalized.

The city says the initial patient in the outbreak is a child who did not receive a vaccination and contracted the virus while visiting Israel, which is experiencing a large outbreak.

According to the city, the other neighborhoods affected include: Bensonhurst, Borough Park, Brighton Beach, Crown Heights, Midwood, Marine Park, and Flushing. Most of these neighborhoods have had only a handful of confirmed cases to date. Bensonhurst hasn't had any additional cases since November of 2018, but Borough Park has seen 49 confirmed measles cases. Over 225 people in Williamsburg have contracted the virus.

The city has also warned parents against taking their children to "measles parties" in an effort to expose them to the virus.