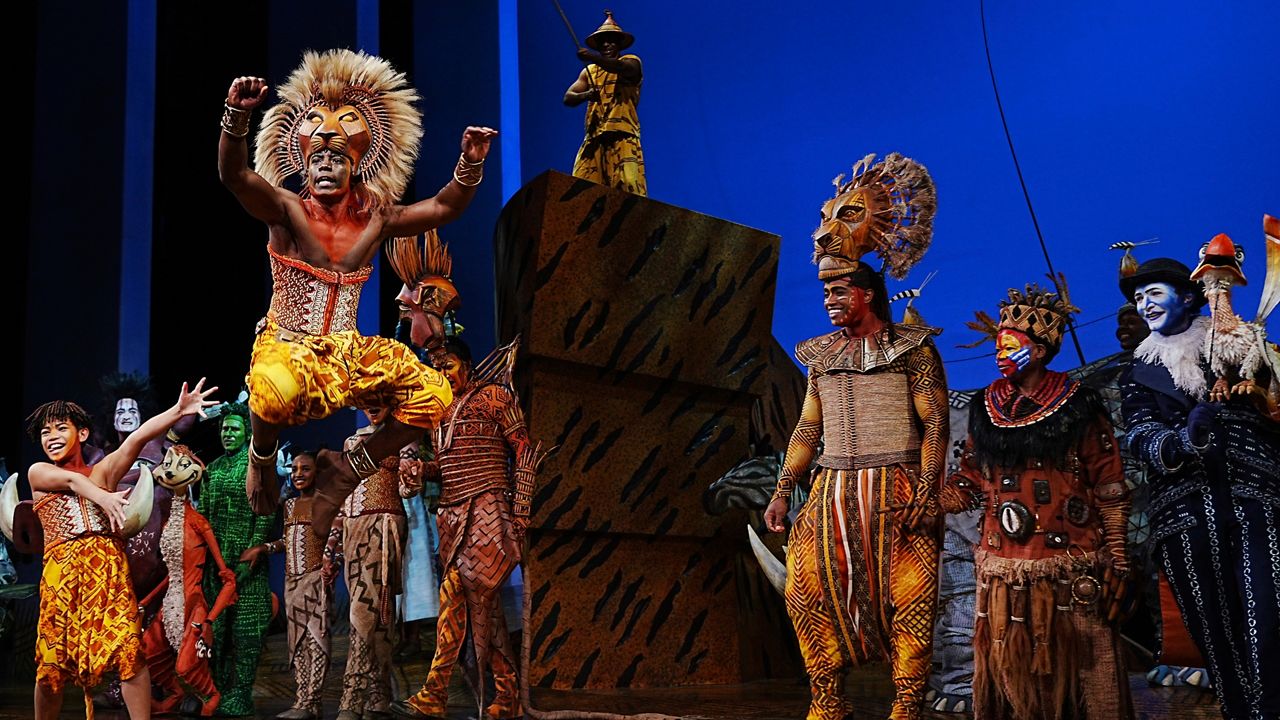 "The Lion King" cast appear at the curtain call following their first show back after the COVID-19 shutdown, at the Minskoff Theatre on Sept. 14, 2021, in New York. Photo by Charles Sykes/Invision/AP.

Broadway is back with reopening of ‘The Lion King,’ ‘Hamilton,’ other blockbuster shows

NEW YORK — "Hamilton," "Chicago," "The Lion King" and "Wicked" reopened to rousing applause Tuesday night  — cheers not just for the performances, but also for the moment, signifying Broadway is back

Wait for it…the crowd was already erupting in applause at the sound of “ladies and gentlemen” but then when Kristin Chenoweth was announced —-just listen! Wow 🤩🤩chills!!! And lots of tears from audience @NY1 pic.twitter.com/qLJhlx4Y0Q


“It’s the most exciting night I can remember in a very long time,” said theater-goer Jessica Brunish, who attended "Wicked."

At "Wicked," as Glinda floated on air, so did the excited audience, on “cloud nine.” Former "Wicked" star Kristin Chenoweth added to the excitement by saying a few words. The crowd went wild.

“Absolutely incredible. As you can see, I still have tears in my eyes. The last, you know, half of 'Defying Gravity,' I was in tears,” Daniel Sims, who attended. “The energy after every single musical number, standing ovations.”

The incredible night on Broadway was punctuated by an impromptu performance outside the Richard Rodgers Theatre. "Hamilton" creator Lin-Manuel Miranda led a group from all the shows reopening in a singalong of the classic "New York. New York," as the blockbuster show finally welcomed fans again.

NY1 spoke with Miranda as part of our special live coverage of the night.

"The neighborhood is so ready to have us back. It's not just those actors back on stage, it's the front-of-house crew, it's the spot op, it's our seamstresses backstage, it's our designers, and, you know, the fact that we're able to sort of perform with our final collaborator, which is really that audience,” Miranda said. “Live theater isn't live theater without a live audience, and we're so excited to have an audience again.”

Ushers Damani Brissett was thrilled. "It was pure catharsis. It was jubilee. It was just radical celebration,” Brissett said. “We are here, we have persevered and we are going to keep doing it. The power of theater will prevail.”

At "The Lion King," the “Circle of Life” once again brought down the house. Nearby, the long-running "Chicago" of course gave it the old dazzle, dazzle. And Gov. Kathy Hochul came out to witness the important night.

"Truly the hardest hit. They were the first to close and the last to reopen,” Hochul said. “That's a lot of people — the costume designers, the set people, the production people, the carpenters as well as the performers and actors and actresses. It's been really brutal.”

“The lights are back on on Broadway, and it just proves that New York state is ready to take center stage once again,” @GovKathyHochul tells @fdilella on @NY1OnStage's special on the return of #Broadway. pic.twitter.com/L1IIFxY2Kz

For theater mogul Jimmy Nederlander, president of the Nederlander Organization with three shows reopening (“Hamilton,” “The Lion King” and “Wicked”) it was a very busy night.

"I’m going by each one of them, saying hello to the producers, giving them a big hug, standing in the back, watching each of the shows begin and then I may just sneak off,” Nederlander said.

After more than 18 months away, the theater world celebrated the beauty and excitement of live theater with a vengeance. Audience members came with a COVID-19 vaccine card in hand, mask on their face, and of course a song in their heart.