NEW YORK — A Staten Island man has been arrested, and a retired FDNY firefighter from Long Island has been charged, in connection to the riots and assault on the Capitol building on Jan. 6.

Nicolas Moncada, 20,  of Taunton Street in the Bay Terrace neighborhood, was taken into custody at 6 a.m. Monday, according to the FBI.

"For those still thinking of employing violence to interfere with our nation's laws and institutions, our message is simple — don't do it,” FBI Assistant Director in Charge William Sweeney said in a statement.

ADIC Sweeney's statement following Nicolas Moncada's arrest for his role in the riot and assault on the Capitol building:

"For those still thinking of employing violence to interfere with our Nation's laws and institutions, our message is simple - don't do it."

The US Attorney's Office for the Eastern District of New York says Moncada live-streamed the Capitol insurrection and allegedly posted videos and photos of himself to his social media accounts before and during the riot. 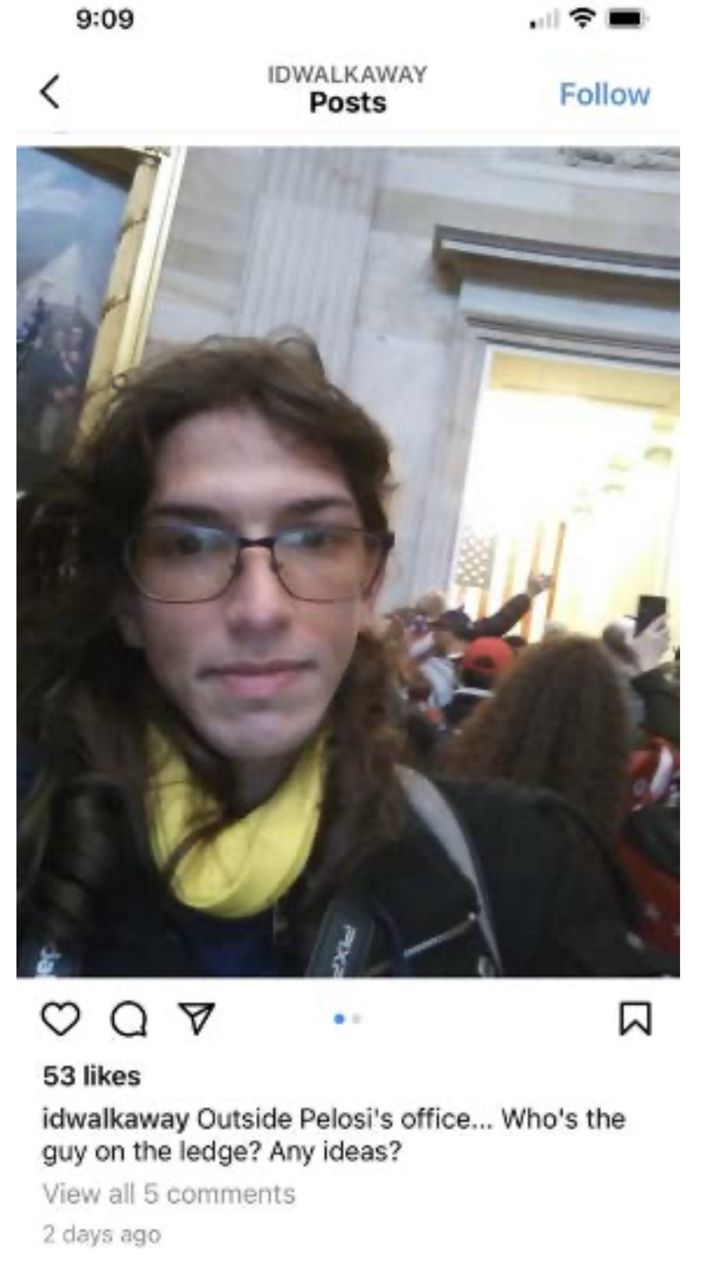 Photo courtesy of the FBI

The FBI said the public safety office at the Fashion Institute of Technology, where Moncada is a student, alerted them on Jan. 8 of Moncada's alleged role in the insurrection after several faculty members and fellow students saw Moncada’s Instagram feed and notified school officials. Some of Mondaca’s neighbors confirmed he attended F.I.T. but took the semester off because of the pandemic.

Campus security at FIT also shared with the FBI screenshots of posts reportedly made by Moncada, including selfies and a first-person video showing what appears to be his unlawful entry into the Capitol complex and his participation in the riots.

Posts on his alleged Instagram page also show him talking about traveling to Washington for the Jan. 6 protest, which led to a riot.

A woman who identified herself as Moncada's mother told NY1's Alyssa Paolicelli that her son is not violent.

"He just wanted to learn the truth of what is happening," the woman said. "He is such a good kid and I don’t want to see his future ruined because he was a part of something. I just want my son home."

Neighbors said they knew Moncada to be a supporter of President Donald Trump.

“He said 'yes, we went down, we had a peaceful protest and that was it,'" neighbor Vin Cigna said. “He shouldn’t have been there, OK, because you are really not suppose to be inside of a restricted place. But if he went in there and he just went in there and did nothing, I don’t see why this had to happen."

"It was like a scene out of a police rampage," neighbor Vin Cigna said. "I saw FBI, ATF, U.S. Marshals, NYPD. It looked like they were looking for a terrorist."

Moncada is expected to make a virtual appearance before a Brooklyn federal judge on Tuesday.

Meanwhile, 53-year-old Thomas Fee of Freeport was charged with disorderly conduct and entering a restricted building.

Sources told NY1 on Monday afternoon that Fee was not in custody.

He is a 22-year veteran of the city's fire department and retired last October.

Court documents claim that Fee admitted in text messages and sent photos of himself inside the Capitol Rotunda to someone he knows who works for the federal government.

Fee allegedly drove to Washington the day before the riot and returned to New York the following day. Court documents said a vehicle registered in his name was observed crossing the Verrazzano Bridge on each of those days. Fee's girlfriend also allegedly posted about his involvement in the riot on Facebook.