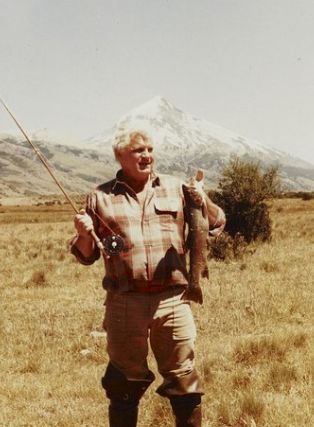 Father of Viggo Mortensen Passes Away

Mr. Mortensen lived in Cape Vincent. Born in Denmark, he met his first wife in Watertown.

He raised his children there, incluidng Viggo who graduated from Watertown High.

Arrangements have been entrusted to Cleveland Funeral Home of Watertown, NY.

Online condolences may be made to www.clevelandfuneralhomeinc.com.

V. Peter Mortensen, resident of Cape Vincent, New York, passed away on Thursday, the 2nd of March, in Watertown, at the age of 87. Mr. Mortensen is survived by his siblings Inge, Karen, Jørgen, and Tulle; by his sons Viggo, Charles, and Walter; his grandchildren Henry, Sydney, Isabella, and Alex; several Danish nephews and nieces; as well as his faithful companion Buddy.

Mr. Mortensen was born on the 8th of May, 1929, in Snekkerup, Vigersted parish, Denmark. He was the eldest of Charles and Anna Mortensen’s six children. He left the family farm after seventh grade to work as a hand with larger agricultural operations. He eventually earned a college degree in agriculture and completed his military service as a Royal Guard in Copenhagen before moving to Oslo, Norway. There he met Grace Atkinson, of Watertown, New York, who was working at the American Embassy at the time. They were married in Watertown in 1954.

In spite of not having attended high school, Mr. Mortensen was a driven autodidact and “self-made” man. He earned a business degree from Massachusetts’ Babson College in 1957, and became a successful life-long entrepreneur. Mr. Mortensen was also a gifted athlete, and counted among his many accomplishments winning national championships in Denmark for cross-country skiing and in Norway for rowing. He represented Denmark as a cross-country ski racer in the 1954 F.I.S. World Championships, held in Falun, Sweden. He was an avid hunter and outdoorsman, and was also a member of a Danish expedition to uncharted areas of Tierra del Fuego in 1965.

With his first wife, Grace, and their three sons, he moved first to Venezuela and then to Argentina where he managed farms and other agriculture-related businesses until 1970. After separating from Grace in 1969, he went on to marry two more times, with Eleonara Nazar Anchorena of Buenos Aires, Argentina, and then Lisbeth Hatling of Trondheim, Norway. After leaving Argentina, Mr. Mortensen continued to travel extensively, living in France, New York City, and Spain, finally settling for good in Cape Vincent, New York with his late wife Lisbeth thirty years ago.

At an as-yet-undetermined date this Spring, a gathering will be organized locally to celebrate Peter Mortensen’s adventurous life, an occasion for his many good friends to share exciting stories and tall tales. He will be sorely missed by his family, devoted caregivers, and many friends in the North Country and around the world.