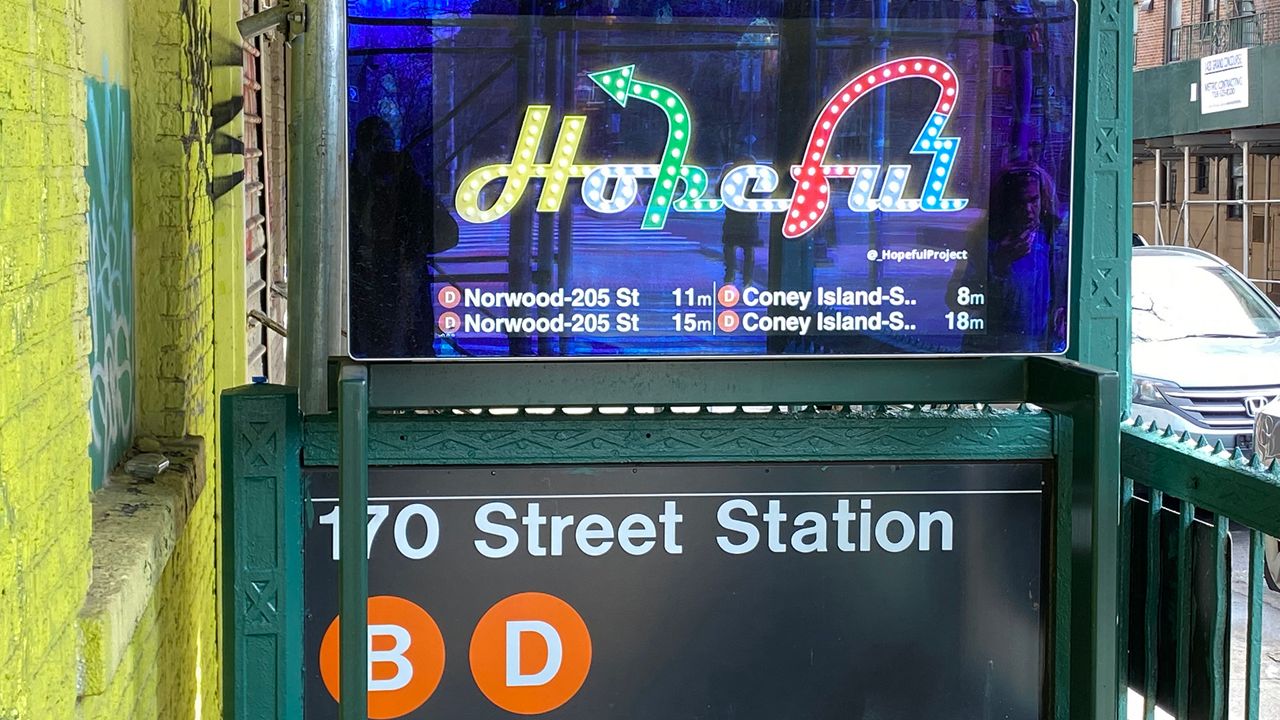 Six Hopeful images can be seen at subway stations in the Bronx. (NY1/Roger Clark)

At the busy intersection of Grand Concourse and Kingsbridge Road in the Bronx, at the B and D train station, a simple, yet strong message on a colorful digital sign reads: "Hopeful."

"This is a commitment I feel to people of the Bronx and Manhattan and all the boroughs who take these trains to work," said Charlie Hewitt, an artist who created the image.

It's part of a collaboration between Hewitt and Chelsea gallery owner Jim Kempner. The Hopeful Project started with a single lighted sign on a gallery roof in Portland, Maine, where Hewitt calls home. Soon, there were new signs of different types in seven different states, including billboards in New Jersey. Retired Bronx teacher Lisa Watkins heard about them and reached out to Hewitt.

"I said, 'We need a lot of hope here in the Bronx,' and so they reached back to me and said, 'Great idea, let's go for it,'" said Watkins.

The hopeful images can be seen at six subway stations in the Bronx. Hewitt said it was a no-brainer. He knows the area well since he has lived in New York for 40 years and still has a studio in Jersey City.

"I wanted to put something up that's challenging, bold, creative, and maybe inspire people to take action, be motivated, and this thing, the message has taken on a life beyond my expectations," said Hewitt.

Watkins and Hewitt met for the first time to see the results of her reaching out to him, and was thrilled. Watkins said the message is perfect for her borough, which has been through tough times during the pandemic.

"The colors, the brightness, the Bonx is a vibrant borough and the people are vibrant and the sign is vibrant and it just spoke to my spirit, to my soul. You know we need hope at this time," said Watkins.

See more of the Hopeful Project on Instagram at @_hopefulproject, and look for more hopeful signs around town as the message continues to spread.