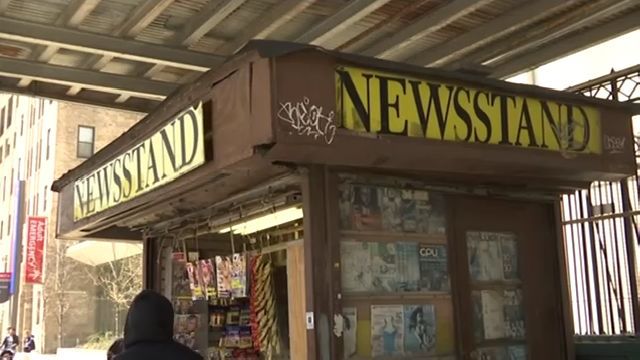 City threatens to shutter historic newsstand in the Heights

One of the city's last old-time newsstands is in danger of closing — the result of a relocation fight with the de Blasio administration. Its elderly owner fears it’s the end of a business that’s been in her family since the end of World War II. NY1's Michael Scotto filed the following report.

Ellen Fine is no longer well enough to work at her newsstand on Broadway and 168th Street, just steps from the subway.

But the old structure is still a huge part of her life.

Opened by her father some 70 years ago, after he returned from World War II, Fine has owned it for the past two decades.

"It's not a relic. It's an historic monument. And you can quote me. That's it," Fine said.

But now the city wants to tear it down and replace it somewhere else in the neighborhood with one of the new glass and steel newsstands that have become fixtures in the city.

She's now operating under a temporary license that runs until May 31.

If a deal isn't reached on a new location she'll likely have to go out of business.

A grim prospect for the 80-something Fine, who says she needs the income to pay her rent.

Fine wants the replacement installed on the site of her current stand, but the Transportation Department says there isn't enough room between the sidewalk and the subway station below to build the needed foundation.

Fine says she has proposed several alternative locations for the newsstand but that DOT has rejected all of them.

The agency says each of her proposed alternative sites has a fatal design flaw, such as being too close to an ambulance drop-off zone.

But Fine says if she moves too far from her current location she will lose too many customers.

The city first told Fine 12 years ago that she'd have to replace her stand, the result of a citywide contract to install uniform street furniture.

The city says hers is just one of 10 old newsstands left. Her lawyer, Max Bookman, says the city should back off.

"We think they ought to go back to the drawing board and see if they can actually install one of the new newsstands here at her historic location. If they can't, then they ought to just leave her alone," Bookman said.

The DOT says it is working with Fine to find a site both sides can agree to.

Fine says she's not backing down.

"I made up my mind to fight it back," she added.