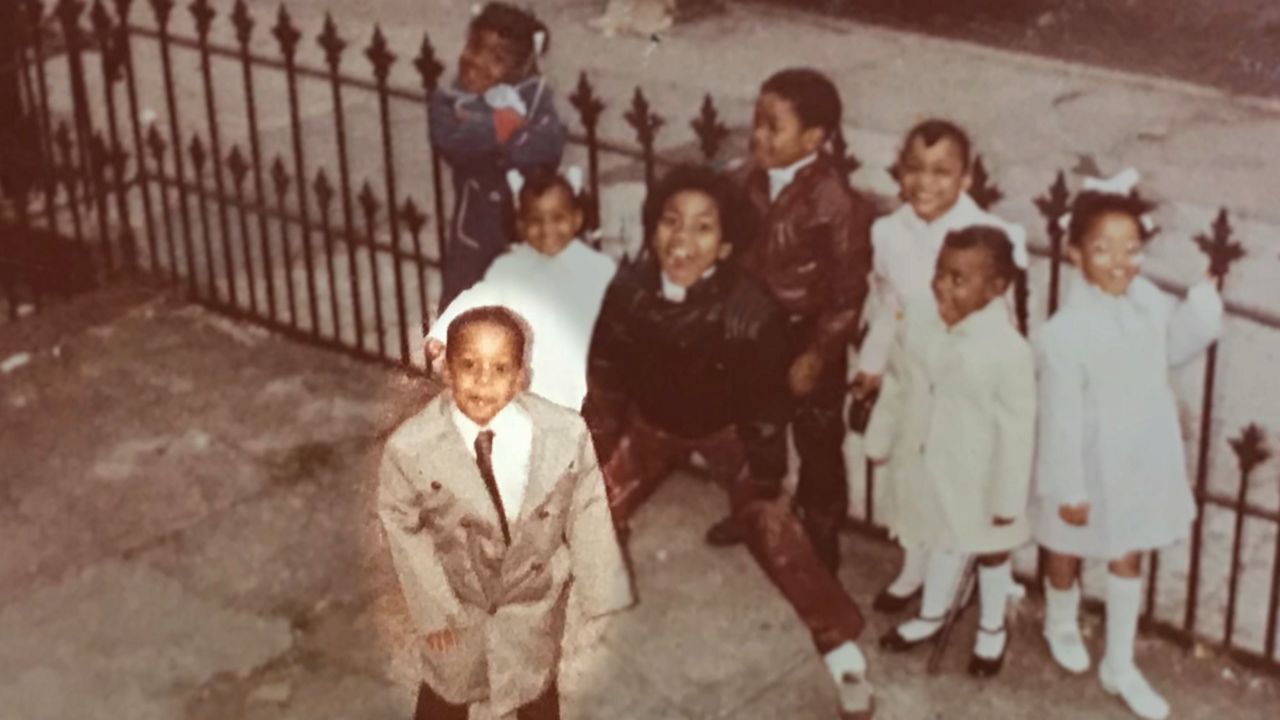 Terrell Anderson, foreground, as a child in Brownsville. Now, he's the commanding officer of the NYPD precinct.

In a picture posted on the 73rd Precinct's Twitter account, NYPD Deputy Inspector Terrell Anderson described himself as the kid with the big head who lived on Hull Street in Brownsville.

Now, he’s the man with the big title and big responsibility of trying to keep that same neighborhood safe.

There are a lot of stories in the picture on the left.

The little boy in the red with the big head grew up to be the Commanding Officer of the community he was born in.

My name is Terrell Anderson and I’m honored to be back home in #Brownsville to serve. pic.twitter.com/x9Yraet98X

“The block is vastly different as far as the condition. Pretty much where we are standing now was all abandoned,” Anderson told NY1 while visiting his old block, a street that now has far more residents.

“Very few people actually lived on the block, but this was early- to mid-80s," he said. "The crack epidemic in the country, so this area was greatly affected by it at that time.”

Anderson was appointed commanding officer of the 73rd Precinct in June. He finds it an honor to now serve and protect the neighborhood where he spent his childhood years. Pointing at a community garden on Hull street he explained, “One of the things I remember vividly was this lot -- well, it’s a garden now, but it was a lot."

He played in that vacant lot like many children did when vacant lots were commonplace in struggling neighborhoods in New York City in the 1970s and 1980s.

“I was trying to do back flips on the mattresses, didn’t get too good at it," Anderson said. "That is something I remember. And something that kids do now, opening up the johnny pumps and getting wet.”

He said there was a firehouse on the block and firefighters would open the fire hydrant for the kids to cool off in the summer.

The building Anderson lived in is no longer there, neither is the firehouse. A metal scrap and junk yard is currently on the property where he once lived. (NYPD Deputy Inspector Terrell Anderson is now the commanding officer for the neighborhood he grew up in, but he has a tall task ahead: violent crime has skyrocketed in the area this year. Dean Meminger/NY1.)

The deputy inspector has spent his life living in Brownsville and Bedford-Stuyvesant. He said he always wanted to serve people and that was solidified when his mother became a civilian employee with the police department. He says she's a true role model. Anderson, who is African American, has spent most of his 16-year police career patrolling his home borough.

“A lot of things that people go through here in Brownsville, I have been through. If I haven’t been through it myself, I know people," Anderson said. "Seen some trauma, family members on drugs, different things that go on in the neighborhood. I bring an intimate knowledge, an intimate understanding, and an intimate desire to really want to help.”

And help is needed in Brownsville like it is in many precincts in Brooklyn. So far this year the number of shootings has increased nearly 200 percent and murders are up 100 percent in the 73rd Precinct area compared to the same period last year.

Anderson says he knows what it is like to live amid gun violence. He recalled the time his family briefly lived in a public housing development.

“We lived on the second floor in the Brownsville Houses and whenever we heard gunshots, my mother would make us get low to the ground. And we had to stay low until the shots stopped," he recalled.

And now he’s trying to get the shots to stop, which he says is caused mostly by gangs.

Anderson believes police and the community have to partner to stop teens from joining gangs and becoming a part of that violent culture.