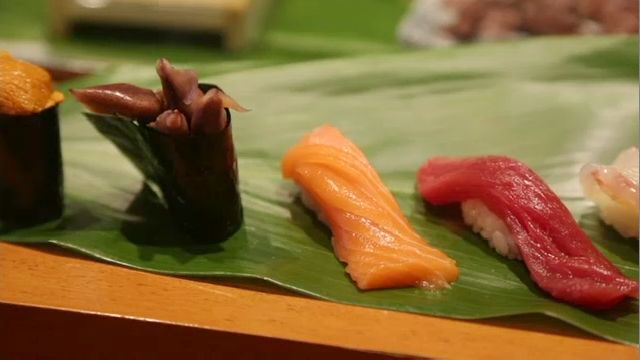 The man behind Sushi Dojo began his career by walked in as a waiter and walking out as a chef. Molly Moker of Zagat filed the following report.

"Sushi Dojo is where I come to practice learning to teach sushi. We welcome questions, we welcome first-timers," Bouhadana says. "Too many times I’ve gone to sushi bars, and I’ve worked at sushi bars, where the chef doesn’t really communicate with the customer or the customer has a question that never really fully gets answered. And there was always a lack of education towards sushi. Sushi Dojo is a place of study."

And that sushi he serves? It’s no joke. Bouhadana spent three years studying in Japan and has worked in esteemed sushi restaurants including Morimoto.

"I kind of got a job by accident when I was 18 years old. I was supposed to be a waiter. The night I came in, the chef insisted I help him in the sushi bar, which was a disaster of an idea," Bouhadana recalls. "It worked out in the end. Sushi generally is passed down. It’s taught by a sensei, a master. I just want to make my first master happy. In Japan, I lived there and 6-7 days a week, 20 hours a day, until you fall down, and that’s kind of how I learned.”

What’s more, his omakase tastings start at just $45, a mere drop in the bucket compared to other restaurants serving the same quality sushi.

"When I worked in Midtown, all there was, was the banker guys coming in with their necktie and throwing it over and an expense account. And I’m like, why are not even some of the customers here all the same? Because they can afford it. But in Japan, you’ve got the gothic kid, you’ve got the lawyer, you’ve got your drunk salary man, it’s so fluid. There’s so many people here and everyone’s here to eat sushi. Everyone’s equal here," says Bouhadana.

At the end of the day, his sushi speaks for itself.

For more food and restaurant videos, subscribe to youtube.com/zagat.