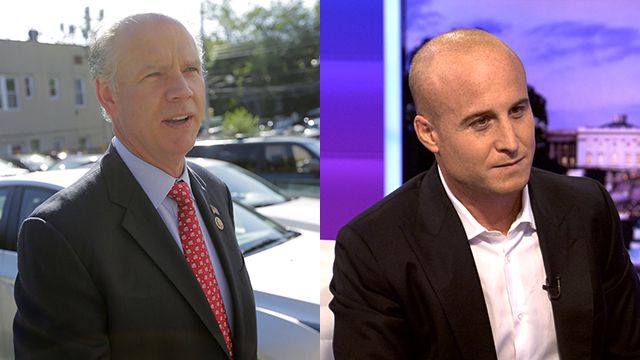 Both Donovan and Rose Have Taken PAC Money, But There's a Big Difference in Their Totals

"He says a lot of things, I have a proven record over 22 years," Rep. Dan Donovan said.

He is Max Rose, the Democratic candidate for Congress, trying to unseat the Republican incumbent, who represents Staten Island and a portion of southern Brooklyn in the House of Representatives.

This election cycle, Donovan has received $760,616 from political action committees (PAC), including from major corporations like AT&T, ExxonMobil, Chevron, and Pfizer.

"He has never shown once where anybody has changed my vote or changed my mind because of political contributions," Donovan said. "I have never done that, I never will."

"He has taken $77,000 from the very oil and gas industry," Rose said at his campaign event. "Then, Dan voted to repeal their emission standards."

Rose claimed campaign cash from corporations influenced Donovan on the floor of Congress, spurring votes to benefit the energy and telecom industries.

A spokesperson for Donovan dismissed the allegation and said Rose was running a deceitful campaign.

Rose also has money from political action committees. He has taken $120,550 in contributions, many of them from left-leaning causes and groups like Planned Parenthood, VoteVets.org, End Citizens United, and NARAL Pro-Choice America.

"He has taken dark money," Donovan said about his opponent.

"He is starting to sound like a kook. Plain and simple," Rose said about Donovan.

As for Donovan, he told us he won't change how he fundraises anytime soon:

Gross: Would you commit to taking no more corporate PAC money?

Donovan: No, listen: People support me because of who I am and what I do.

The two congressional candidates will face off in their only televised debate on NY1 at 7 p.m. Tuesday.