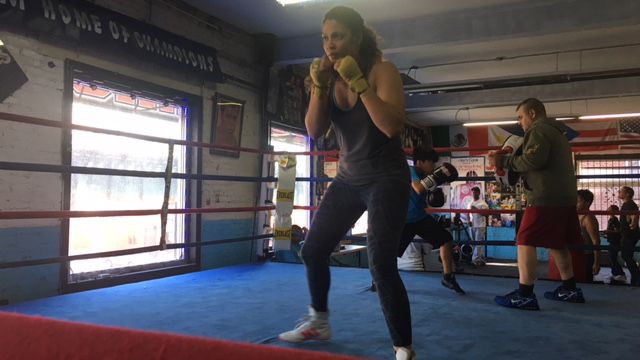 With her eyes focused on her dream and perfecting her jab, Nisa Rodriguez says she’s determined to knock out the competition and make it to the Olympics.

The 28-year-old middleweight has been boxing since she was 13. Her first ring was the streets of Mott Haven.

"I was getting into a lot of trouble in the street. I was always into a lot of sports, but it was like, you can punch somebody in the face and get away with it,” Rodriguez said.

From feared fighter in the street to the only girl in the gym, Rodriguez found a positive way to channel her aggression.

"Before, she was like a hurricane, just keep coming in and throwing wild punches," said her trainer Richard Jenkins.

"All the guys were like, 'What's this chick doing? Let's beat her up until she leaves.' And I stood there and it built character,” Rodriguez said.

The Bronx-born athlete heads to training camp next week in hopes of making a name in the Central American games. It's a qualifier for the 2020 Olympics.

The competition is tough, but she says nothing is harder than boxing while raising her 9-year-old son on her own. Losing her father, she says, was also more bruising than any punch from an opponent.

"My father was always my first love," Rodriguez said with tears in her eyes.

Thoughts of her father will be with Rodriguez when she represents the island her parents came from. Just like this fierce fighter, Puerto Rico is still trying to recover from a big loss, Hurricane Maria's devastation.

"It's a little bit of pressure, but I feeI was meant to do this," she said.

Rodriguez got her start at St. Mary's Park before training at John's Boxing Gym, which has since moved to Jerome Avenue.

Aside from her Olympic aspirations, the boxer also wants to open free boxing gyms for at-risk youth in Puerto Rico and the Bronx.

"For them to see someone that is like them, that come from the ghetto, that you don't really have much but you're trying to do what you can to not become a product of your environment. You're trying to live the dream," she said.