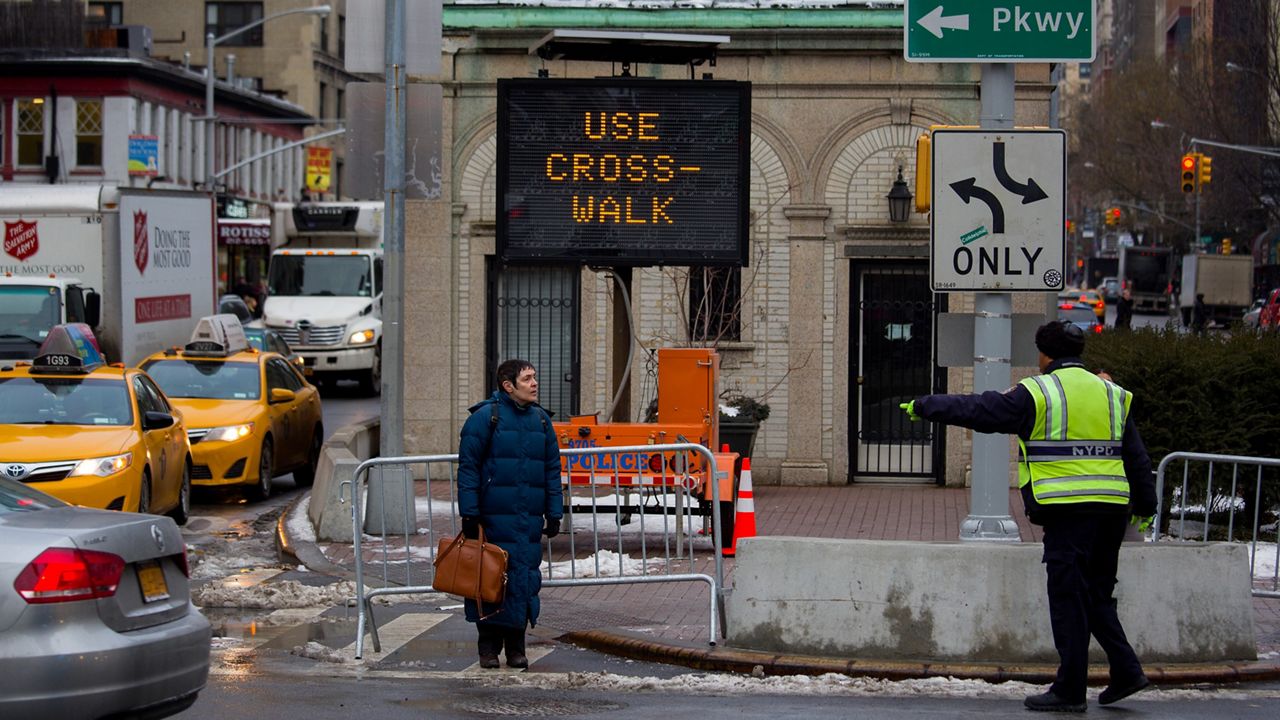 In this Jan. 27, 2014 file photo, a pedestrian is given direction to a crosswalk by a traffic agent in New York City. (AP Photo/Craig Ruttle, File)

Traffic fatalities are rising in New York City, and the first three months of 2022 were the deadliest start to any year since 2014, according to new data released Wednesday by Transportation Alternatives and Families for Safe Streets.

Traffic crashes killed 59 people in New York City from January through March of this year, a 44% increase over this point last year, the Transportation Alternatives data shows.

According to Transportation Alternatives’ data, if the death count continues to rise, 2022 will be the first year since 1990 that there are four consecutive years of increasing fatalities.

“From children in Queens to seniors in Brooklyn, too many New Yorkers are killed simply waiting for the bus or crossing the street, and the numbers are only increasing.” said Danny Harris, executive director of Transportation Alternatives. “Our leaders must take steps immediately to save New Yorkers and prevent this year from turning into another record-breaking year for traffic fatalities."

Pedestrians accounted for 29 deaths in that time period, nearly half of all traffic fatalities, according to Transportation Alternatives. That includes 99-year-old Holocaust survivor Jack Mikulincer, who died crossing a Brooklyn street in his electric wheelchair after a driver hit him on Feb. 5.

“My grandfather survived the horrors of the Holocaust, but was not able to cross the street in his neighborhood. Crossing the street should not be a life-or-death risk," said Mikulincer's grandchild and Families for Safe Streets member Elke Weiss.

In response to the report, Department of Transportation First Deputy Press Secretary Vin Barone said the city “is working around the clock to increase the number of safety measures and eliminate traffic deaths in New York City.”

“The safety of New Yorkers is our number one priority,” Barone said. “We are proud of the work we have done to curb traffic deaths and we understand there is still much more to do.”

The NYPD also issued a statement in response to the report, saying while traffic fatalities have increased this year overall, there has been a 70% reduction in overall traffic deaths so far this month (as of April 17) when compared to the first 17 days of April 2021, and that pedestrian deaths between January and April 17 have decreased by 17% compared to the same time last year.

The NYPD added that the Transportation Bureau’s Highway Unit stepped up enforcement on highways where the data has shown a rise in injuries and fatal collisions.