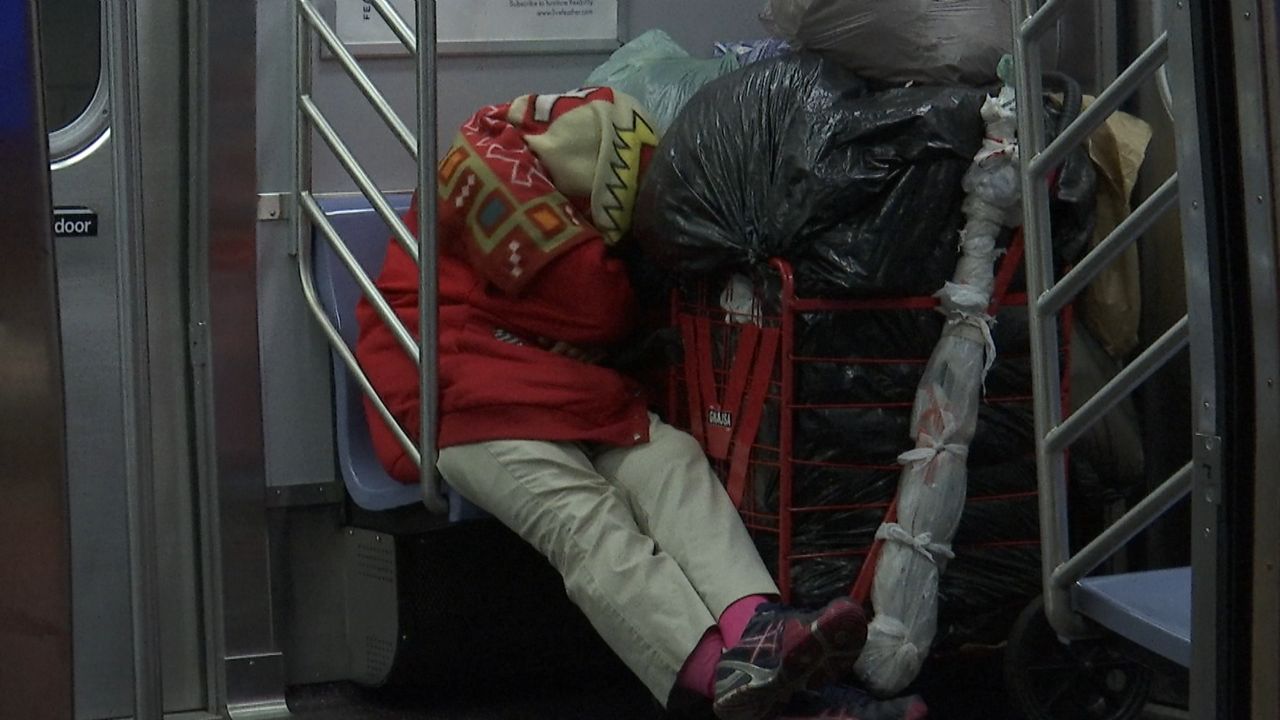 With a pandemic raging, most New Yorkers have abandoned the subway - but the homeless have not.

Photos and videos of homeless riders have become common on social media, an effort by riders and transit workers to highlight the problem.

A train operator on the E line who has posted photos on Twitter tells NY1 it’s more prevalent than ever.

"You have the homeless back to back, laying literally in the car, on their backs, like in the bunk in the homeless shelter," the train operator told NY1.

It is not clear if the number of homeless people on the trains has increased or whether it just appears that way because the homeless are now spread among fewer cars with the MTA reducing service.

What is clear is that the bunching of homeless people makes it more difficult for riders to distance themselves from each other to reduce the likelihood of the virus spreading.

Riders also are upset because many of the homeless do not wear the face coverings everyone is supposed to use on the trains.

"Every bus and subway car you board has homeless people now," an airline worker who commutes tells NY1.

"I think it’s safe to say everyone here is losing patience with the situation," Sarah Feinberg, the interim NYC Transit president, said at Wednesday's MTA board meeting.

The MTA uses its own police force, and contracts with the Bowery Residents Committee, to reach out to homeless people and convince them to seek shelter.

According to the MTA, the agency and its partners in reaching out to the homeless said there were more than 8,600 conversations with homeless people in the transit system - more than the average of 6,400 conversations a month since last August.

"I don’t understand what she’s saying, because the NYPD has been out there in force trying to address this issue constantly," he said. If she’s losing patience, I don’t know why she hasn’t called me."

The mayor disagrees that the problem is out of control,  but he said the city can only try to coax the homeless off the trains, and cannot arrest them.

"It’s tough, tough work, but that’s what the NYPD has been doing and that’s what all these outreach workers have been doing for a long time, and with a lot of successes," he said. "Clearly more to do, and we’re not stopping."

But he also acknowledged his plan to permanently address the homeless problem by placing them in apartments and so-called Save Haven facilities with supportive services has been sidetracked because of the pandemic.