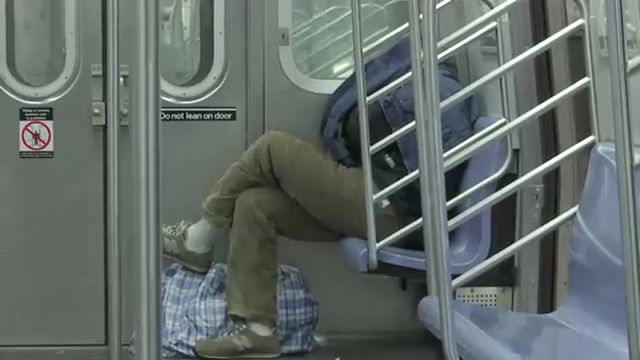 With NYC in deep freeze, many homeless people seek refuge in the subways

Melvin Fields doesn't have a place to call his own. But the 63-year-old does have the subway.

A deep freeze that's sent Fields into the city's transit system for shelter.

"I be in the streets sometime. And I go to work sometime, do little odd jobs and stuff like that. I stay on the train a couple of hours," he said.

The subway has long been a last stop for the city's homeless. But the combination of fierce winter weather and a record city homeless population of more than 60,000 has resulted in an unusually large number of people seeking shelter on trains and in stations over the last 10 days.

This, even though Mayor Bill de Blasio vowed to address the problem after a New York Post photo in October of a man sleeping under a subway bench set off a new round of sniping with Governor Cuomo.

"I applaud that approach. There is more to be done. The subways are not a place to sleep," MTA Chairman Joe Lhota said in October.

Working alongside the MTA, the city's Department of Homeless Services has increased the number of outreach workers in the subway from 20 to 111. And in the month of November, they found housing for close to 120 people who had been living in the subway."

Under the city's Right to Shelter Law, the city is compelled to provide shelter to the homeless, though many prefer the subway as a safer alternative.

The E train remains the line of choice for the homeless in the transit system. Running underground from Queens to Lower Manhattan, the cars are never exposed to the elements outdoors.

"That at the very least will provide some warmth," said Giselle Routhier of the Coalition for the Homeless. "But for sure, I think the best option is to try to get folks into a shelter and some type of warm, heated environment."

"The trains are pretty warm, so I don't see anywhere else they could go," said one New Yorker.

The city estimates that about 1,800 homeless people regularly sleep in the subway, but advocates say the number is probably higher.

"There's really no accurate way to get that number," Routhier said.

And judging from our survey of several lines on Friday, that number is rising now that the temperature keeps falling.