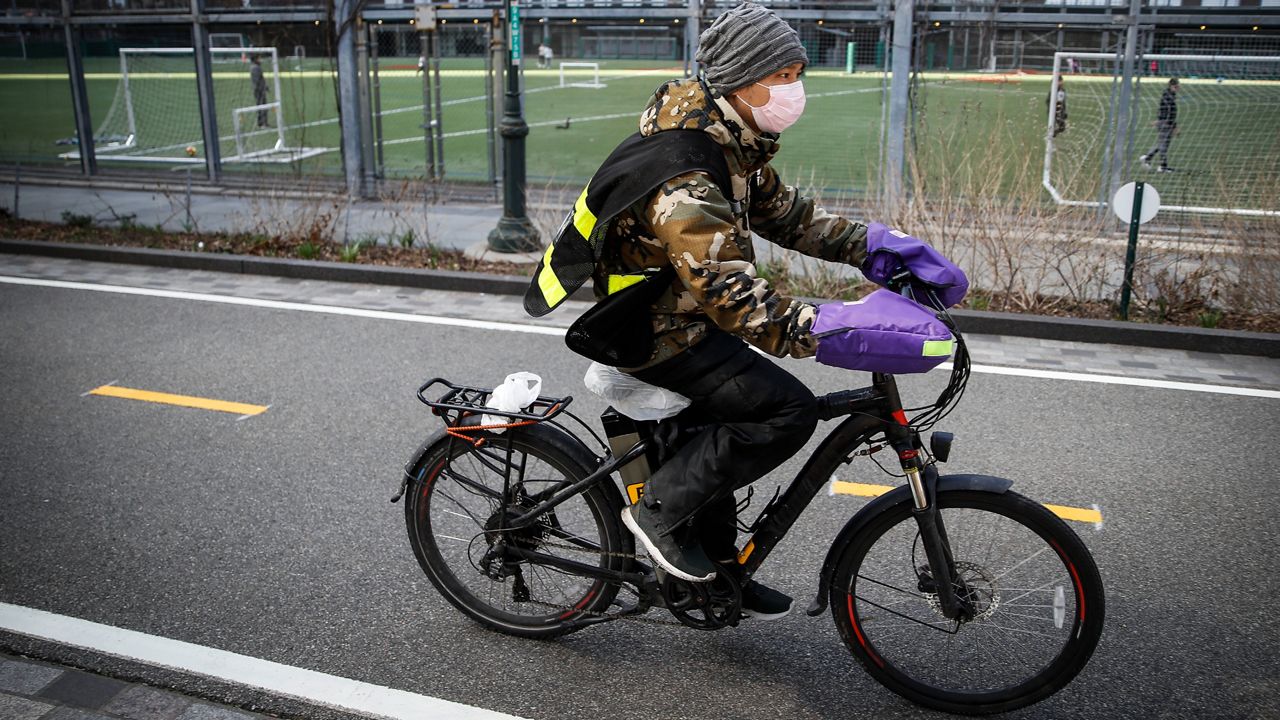 A delivery worker wearing a face mask rides his bicycle along a path on the West Side Highway on Monday, March 16, 2020. (AP Photo/John Minchillo)

The bike and pedestrian paths on Manhattan's West Side Highway offer stunning river views for runners and cyclists, including electric bike users and scooter riders, who are currently not allowed to ride.

That means competition for street space intensifies — particularly on a sunny day.

"I'm very surprised that an accident, a serious accident, hasn't happened already," said Jerry Macari, a runner on Hudson River Greenway. "There's a lot of chatter, like some profanity. You know, 'get the eff out of the way' and all that type of stuff. And, in fact, many of these people who come at me are people who are on the e-bikes."

Manhattan Borough President Mark Levine has an idea to cool down everyone who uses the greenway — take a traffic lane from the West Side Highway and hand it over to cyclists of all types for their own path, separate from traffic.

"This is most heavily used greenway in the country, and at peak hours during the morning and evening commute times, on the weekends, when the weather is nice, it is incredibly crowded," Levine said.

This would be a four-mile long bike lane running between 57th Street and Chambers Street along the West Side Highway, officially known as New York State Route 9A.

He pitched this plan in letters to the state and city transportation commissioners.

"This would alleviate the crowding on the main path and create much safer opportunity for people who are on bicycles or e-bikes or cargo bikes," Levine said. "The status quo is not working."

It's an idea a similar to the city creating a bike lane on a lane of traffic on the Brooklyn Bridge at a time of a cycling boom over the years, particularly during the pandemic as New Yorkers looked to travel in the fresh air, compared to subways or taxis.

According to the city's Department of Transportation, there were nearly 4,000 cyclists pedaling along the greenway over a single 12-hour period during the day this summer.

"I think it's fabulous idea. It would encourage more people to exercise. There are a lot of confrontations with bikers and pedestrians and runners, and that can be avoided as well," Macari said.

"I think it would just be a lot more relaxing and you'd also get where you're going faster, as well. I think a lot of people are using it to commute or using it to make deliveries, so it would just make things go a lot smoother," added Nick McKelvie, a greenway cyclist.

This is a state-owned highway so to turn this idea into reality the state's Department of Transportation would have to sign off.

The Manhattan Borough President said he'd like the bike lane to open when congestion pricing — a fee on driving into Manhattan — is in place, so drivers who decide to leave the car at home could have a comfortable bike commute.