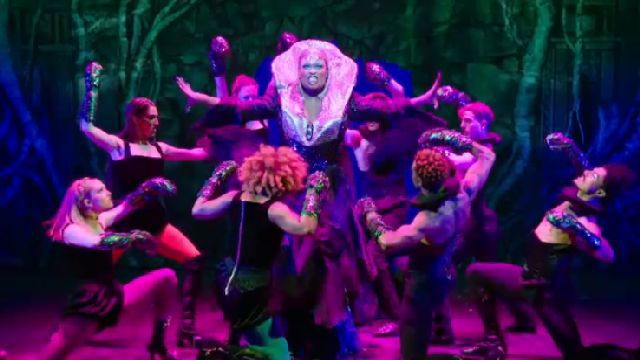 There are a lot of "ifs" that will determine your appreciation of this one. If you like the music of the Go-Go's, if you're partial to silly period musicals, if you're into Sir Philip Sidney. Yep, you heard that right.

"Head Over Heels" is a cockamamie mish mash of disparate elements that at best is a high-energy goofball of a show and at worst, well...see for yourself.

Set in Elizabethan times, it is indeed based on a long prose romance written by Sir Philip Sidney, circa 1590. Jeff Whitty conceived of the musical with an adaptation by James Magruder to match the songs of the famed all female band The Go-Go's.

The convoluted story revolves around a king and queen, their two daughters and a shepherd love interest.

Their lives do indeed turn head over heels as King Bacilius visits the Oracle Pythio who portends a series of calamitous events. It gets awfully complicated and audiences may tune out before it's all resolved.

But I'm not even sure it matters because if you're willing to suspend your disbelief, under Michael Mayer's spirited direction, there's so much good-natured talent on the stage you may just give in to the frivolity.

Jeremy Kushnier and Rachel York are having a royal blast as the King and Queen. Bonnie Milligan and Alexandra Socha manage the comedy and romance with great skill. So too Andrew Durand pulling a Shakespeare style gender swap.

And in fact gender identity is very fluid in this show. Pythio is played by the famed drag artist Peppermint. The Playbill tells us she becomes the first transgender woman to create a principal role on Broadway. And she does indeed live up to the hype.

Another plus: they're backed by a terrific all female band that sounds a lot fuller than you'd expect from just five musicians.

And Spencer Liff's dazzling choreography is an intricate kaleidoscope of synchronized arms and legs featuring some of the best dancers on Broadway.

Back to the source, Sir Philip called his prose romance, a trifle. Indeed that's just what “Head Over Heels” is. And if that's your speed, you may just flip for it.