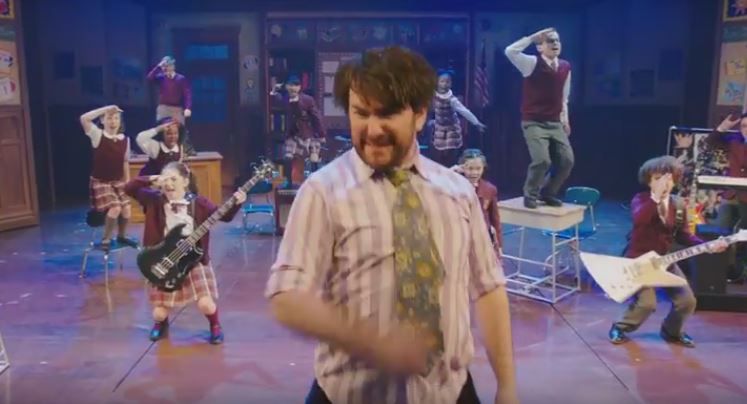 Andrew Lloyd Webber returns to his rock roots with the new musical “School of Rock.” NY1’s Roma Torre has the review.

Ever since Andrew Lloyd Webber became Sir Andrew, the prodigiously talented composer seemed to struggle. After his early mega successes came a string of disappointments and critics charged the musical knight had lost his common touch. But happily, a return to his rock roots opened up the flood gates of his creative juices. And with the help of his equally talented collaborators, “School Of Rock” is a rock solid hit!

Based on the film starring Jack Black, the role of Dewey Finn the schlubby rock-star wannabe is played by Alex Brightman who not only resembles the film actor he channels Black’s infectiously offbeat spirit. His energetically winning performance is only part of the equation.

Book writer Julian Fellowes, famed for penning the Downton Abbey series, matches the film’s subversive humor with a human touch. The story of how Finn fraudulently takes over a prep school class and teaches the kids the only thing he can – how to make rock music - is a fairy tale of course but it’s an irresistible one.

And all of the pieces come together in perfect harmony thanks to Laurence Connor’s flawless direction. He’s aided immeasurably by Anna Louizos’ terrific scenic design depicting multiple locations.  And Lloyd Webber’s music with lyrics by Glenn Slater is his best in years.  Their rock anthem “Stick It To The Man” is still stuck in my head.

As the prissy principal who comes alive with song, Sierra Boggess scores.  But the secret weapon in this show is the kids.  Magnificent talents all, it’s thrilling to witness these young stars in action impressively singing and acting – and they really do play the instruments with unbelievable virtuosity.

Just as School Of Rock is all about the liberating nature of rock music, life imitates art for Sir Andrew who seems to have re-discovered his own great gifts through the music of his youth.  School Of Rock may not be groundbreaking, but as crowd- pleasing entertainment, it doesn’t miss a beat.