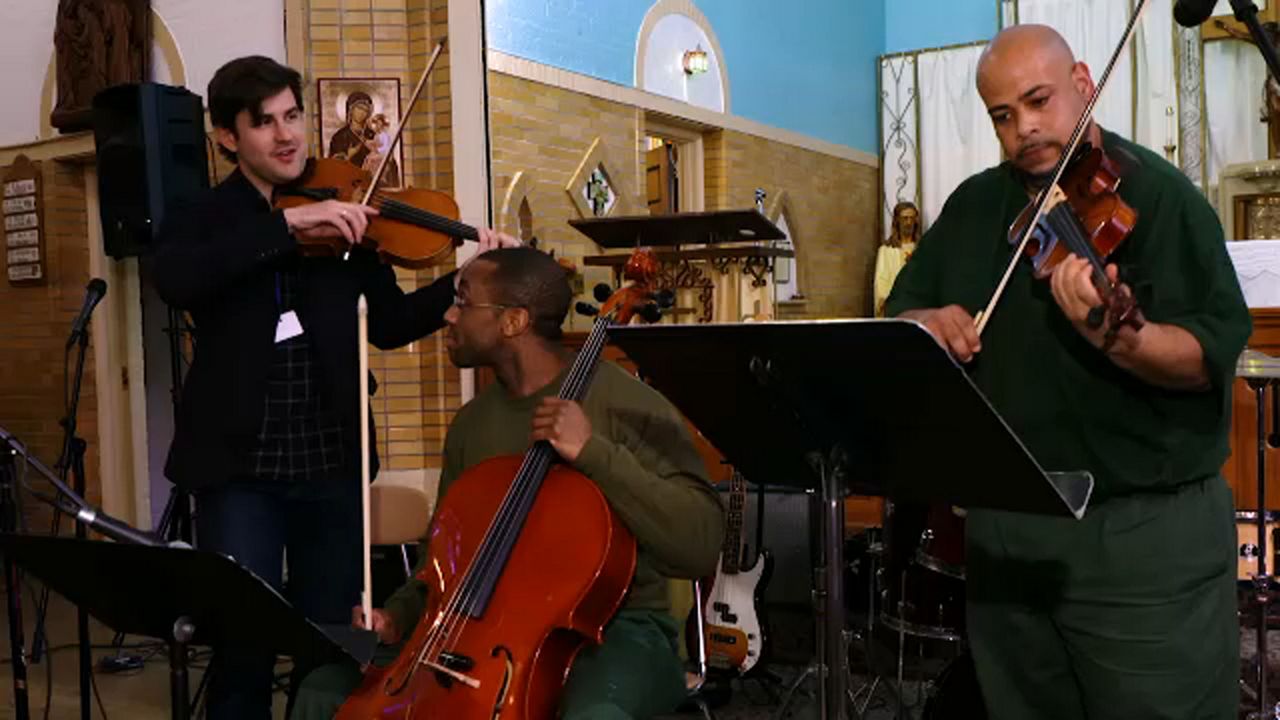 Bringing the power of music to inmates at Sing Sing

It's a strange feeling to enter a maximum security prison - willingly.

Certainly, Sing Sing Correctional Facility is not a place I ever thought I'd ever visit on the culture beat. And yet, the NY1 crew traveled 30 miles north of New York City to see inmates rehearse and perform music as part of a special music education program there called Musicambia.

Once we arrive, it takes a long time to get through security with our cameras and lights. We've already spent months getting approval to film inside the prison's chapel, which doubles as its music room. As we wait, I'm partly skeptical about what kind of impact a music program can have in a maximum security prison like this.

When we finally enter with Musicambia Founder Nathan Schram and his team of music educators, I'm greeted by a calm scene of men quietly setting up microphones and instruments, shuffling music sheets and going over what seem to be some last minute changes to the order of performances. Today, they're performing for their fellow inmates. They live for this - literally. Some of the inmates tell me how they had lost their will to live, but then Musicambia made them feel human again. It gave them something to live for.

As "Flaco" struggles at the violin and Albert stands by the cello, I see their camaraderie as musicians in training. I see their vulnerability, their joy in making music, their hope for the future. Nathan teaches them and encourages them. No judgments.

Albert tells me directly, "The cello gives me a feeling that I didn't have before. Gives me hope."

Another inmate, Daniel, says, "This pretty much saved me. We’re together with the music, everybody, it’s like a brotherhood. "

Joseph puts it even more bluntly. "I’m able to be human now," he says.

When Nathan pulls out his viola to play, I am struck that he could play anywhere. He chose to come here and play alongside inmates. In fact, Nathan was on his was to a career performing on the great concert stages of the worlds. But in 2011, as part of a fellowship at Carnegie Hall, Nathan played for inmates at Rikers Island. At that concert, everything changed for Nathan. When he saw the response of the inmates to the music, he knew in that moment that there was no audience that was more in need of being helped by music than those behind bars. After studying other music-in-prison progams across the country and around the world, he developed Musicambia.

I ask what we all wonder: why should anyone convicted of very serious crimes be blessed to have this music program? Turns out it's a question most have asked themselves many times. No one we spoke to had the perfect answer, but in different ways, they all tell me, "None of us is sentenced to life here. We are all set to get out at some point. Don't you want me to be rehabilitated before I am released?"

Through their music lessons and performances, they learn self-confidence and self-expression. But most of all, the men say again and again that if Nathan can see them as human beings beyond the labels of their crimes, then they can begin to see themselves that way. That's how I come to see them too.