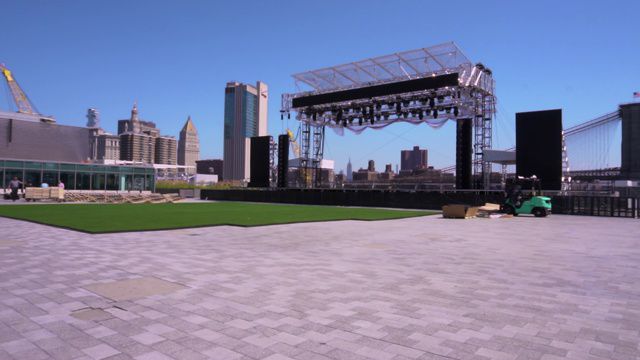 Shannan Ferry takes a look at Pier 17, a new concert venue at the South Street Seaport.

Many of us who grew up in New York City have great memories at the South Street Seaport. I remember taking day trips with my parents and brother as a kid, strolling through the cobblestone streets and the mall, and learning about a place where merchants, seamen and artisans once converged. But the historic port, now known as the Seaport District, is undergoing a major change. The city and developers hope to spur economic growth in the area, and Pier 17 is a major part of that effort to redefine this iconic spot along the East River.

As soon as I walked up to Pier 17's rooftop, I immediately noticed the incredible views. The Statue of Liberty, the Brooklyn Bridge, Governors Island and Brooklyn Battery Park are all right there, almost at eye level with you. There's a neat grass turf that can be installed or removed depending on the event being hosted there that day or night. Global real estate developer the Howard Hughes Corporation was brought in to reimagine the Pier 17 structure, which hasn't changed much since it was originally constructed in the early 1980s as a mall.

The goal is to create a dynamic space where guests can take part in all kinds of community events, including fitness classes, movie nights and, of course, a place to see a great show. This is meant to give tourists and New Yorkers much more than just a few gift shops to explore if they decide to come down and visit the area.

The first season lineup is pretty diverse and covers a wide range of genres and generations. Amy Schumer, Kings of Leon, Trevor Noah, Sting with Shaggy, Deadmau5, St. Lucia, Gladys Knight and The O'Jays, and Diana Ross are all expected to take the stage. The venue feels intimate, too, so it's a chance for guests to see their favorite performers in a much different setting. (Just look at Amy Schumer, for example! Many of her fans saw her perform at Madison Square Garden - which is SUCH a different atmosphere.) The developers also purposely created a rooftop concert venue to take more of what the seaport has to offer outdoors rather than indoors, considering the mall was one of the port's main attractions up until now.

But what would a redevelopment project be nowadays without food trucks and new restaurants, right?  Along with plenty of quick bites, there's also going to be plenty for foodies to sink their teeth into - including a Chophouse restaurant and a Malibu Farms. There will also be an art gallery, and new shops like By Chloe, McNally Jackson Books, and even a store tied into the quintessential New Yorker! Sarah Jessica Parker is expected to open a store later this fall on the corner of South and Fulton streets. Plus, anyone looking for a new rooftop spot for happy hour? I think this may be the place for you.

Pier 17, the restaurants, and shops are likely to stimulate the seaport's economy and tourist appeal. Back in 2012, storm surge during Hurricane Sandy devastated the seaport, forcing shops to close for years. The developers behind this project are confident it will lead to a true renaissance of the seaport district while still paying tribute to it's past. They assured us they worked with the city's Landmarks Preservation Commission and the city's Economic Development Corporation closely on the project to ensure they'd be upgrading the area without letting go of the seaport's history, which many of us grew up learning about.

As for me, I don't think I'll need much convincing to go back! I felt a sense of peace and excitement sitting up on that rooftop overlooking the East River and watching the construction underway, all in an effort to bring people back to the waterfront.