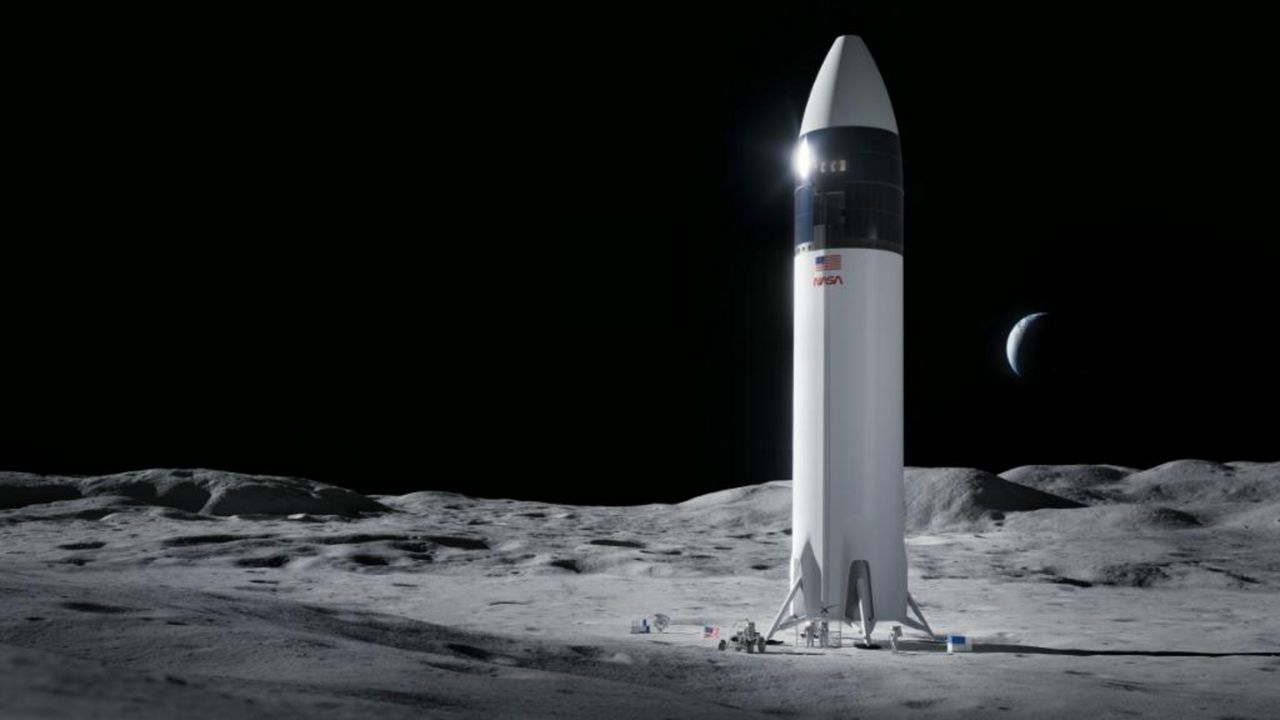 NASA released this concept art of a SpaceX vehicle on the surface of the moon. The agency's Artemis program hopes to return humans to the moon in 2024. (NASA)

Nearly a year after announcing that three companies would compete for the chance to build the Human Landing System, NASA’s next vehicle to land humans on the Moon, NASA announced Friday that SpaceX would win that contract.


Starship was in competition with Blue Origin’s Blue Moon lander and Huntsville-based company Dynetics’ Human Landing System for the contract, which is part of NASA’s Artemis program to return astronauts to the lunar surface in 2024.

A component of NASA's Artemis program, the Human Landing System will take astronauts from lunar orbit to the lunar surface and back.

“With this award, NASA and our partners will complete the first crewed demonstration mission to the surface of the Moon in the 21st century as the agency takes a step forward for women’s equality and long-term deep space exploration,” said Kathy Lueders, NASA's associate administrator for Human Explorations and Operations Mission Directorate. “This critical step puts humanity on a path to sustainable lunar exploration and keeps our eyes on missions farther into the solar system, including Mars.”

“We are humbled to help @NASAArtemis usher in a new era of human space exploration,” SpaceX said in a tweet.

Lisa Watson-Morgan, the HLS program manager at NASA’s Marshall Space Flight Center in Huntsville, Alabama, said that there were 27 requirements that all three vendors were asked to meet, and SpaceX met the “very detailed design and structure standards.”

She said the demonstration landing will include a descent and landing test. When asked during a news conference whether Starship would launch from Kennedy Space Center's Pad 39A or elsewhere, Watson-Morgan said there wasn’t a mandate from where the chosen lander needed to launch.

“By taking a collaborative approach in working with industry while leveraging NASA’s proven technical expertise and capabilities, we will return American astronauts to the Moon’s surface once again, this time to explore new areas for longer periods of time,” she said.

It has been a good week for California-based SpaceX since it was just two days after space robotics company Astrobotic Technology, Inc. selected its Falcon Heavy rocket for the 2023 water-seeking Volatiles Investigating Polar Exploration Rover (VIPER) mission.

.@NASA has selected @SpaceX to continue the development of its Human Landing System for the #Artemis program.

The Human Landing System will take astronauts from lunar orbit to the lunar surface and back. Read the full announcement: https://t.co/tkojemwUUr pic.twitter.com/bvOX6DQsXA

And next Thursday, the company is set to carry four astronauts to the International Space Station.

The lunar lander contract is for a demonstration landing as soon as 2024, and the Starship will be launched on SpaceX’s Super Heavy rocket. NASA will coordinate with SpaceX to reach this goal.

Musk may have had some heads up on one of the two lunar announcements before they became public. On Saturday, he simply tweeted “… going to moon very soon.”

NASA announced its selection of the three companies on April 30, 2020, under the Next Space Technologies for Exploration Partnerships (NextSTEP-2) announcement. The combined value for developing their designs was $967 million for the 10-month base period.

The Human Landing System program is being overseen by NASA’s Marshall Space Flight Center in Huntsville.

Dynetics said its Human Lunar Landing System could be fully integrated on the Space Launch System (SLS) Block 1B vehicle. It can also be flown aboard United Launch Alliance’s Vulcan Centaur rocket for commercial launches.

“Vulcan Centaur, a single core vehicle, will support challenging missions with unique second stage capabilities unmatched in the industry and we look forward to a continued partnership with NASA LSP,” ULA CEO Tory Bruno said in a statement.

Vulcan Centaur is set to have its first launch in 2021.

In January, Dynetics announced its completion of the HLS Continuation Review, during which it submitted details on its early designs to NASA.

The company has been testing its main engines at its propulsion site and at Marshall Space Flight Center.

Blue Origin partnered with Lockheed Martin, Northrop Grumman and Draper in what they collectively called the “National Team” to develop its lander. Blue Moon would also be able to integrate into the SLS as well as the Vulcan Centaur and Blue Origin’s New Glenn rocket.

“The National Team doesn’t have very much information yet. We are looking to learn more about the selection,” the team said in an email response to Spectrum News.

There was some speculation that NASA would select two candidates for the Human Landing System, but Watson-Morgan said Friday that choosing only SpaceX was the “best strategy at this point.”

However, this doesn’t mean this is the end of the road for Dynetics and Blue Origin’s landers.

While Watson-Morgan’s Huntsville-based team will be primarily working with SpaceX on the demonstration landing mission, as soon as next week, they will be kicking off a “competitive procurement for sustainable crewed lunar surface transportation services that will provide human access to the lunar surface using the Gateway on a regularly recurring basis beyond the initial crewed demonstration mission.”