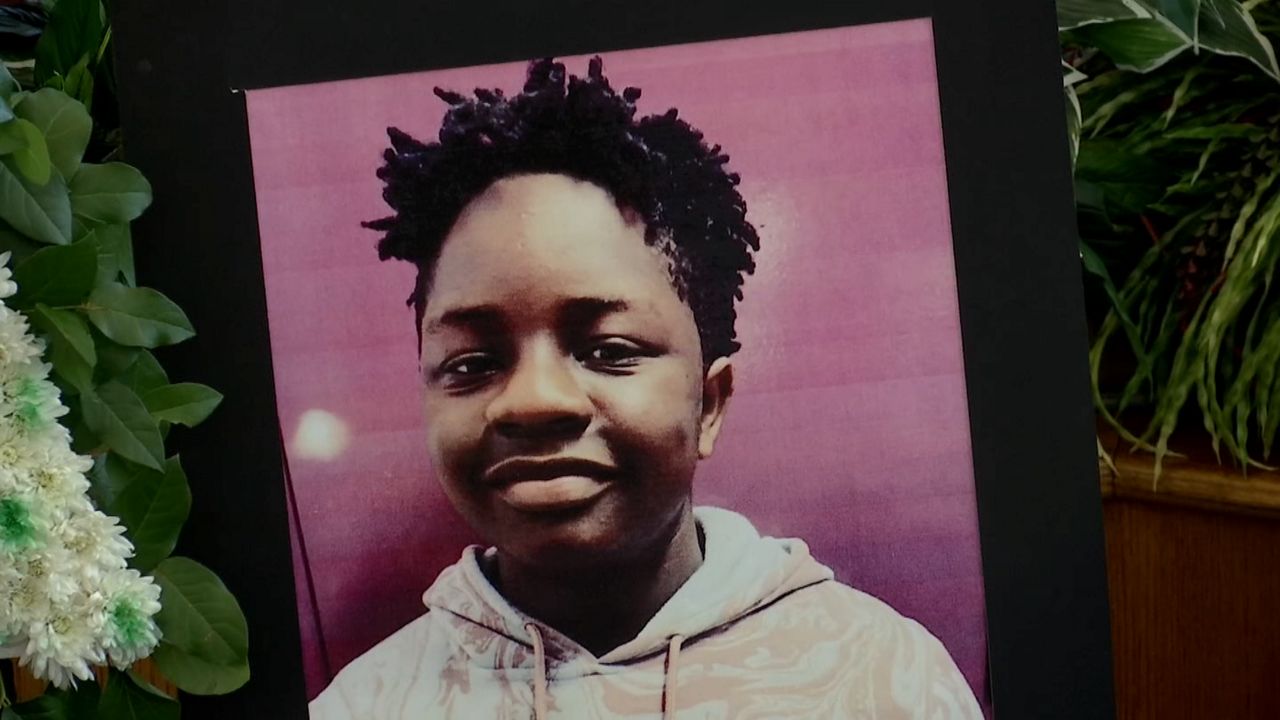 The family of Kade Lewin, a 12-year-old shot and killed in Brooklyn in March, on Wednesday. (NY1 Photo)

An infectious smile with a take charge personality. That is how family and friends will remember Kade Lewin, they said at his funeral services at New Life Tabernacle Church in Brooklyn Wednesday.

The 12-year-old enjoyed playing football and video games, but he especially loved movie nights with his mom.

“This child was Suzette’s life, her reason for being, her everything, her comfort,” said Angela Lewin, his aunt.

Kade was sitting in a car with his 20-year-old cousin Jenna and 8-year-old niece Kylie when a gunman opened fire in East Flatbush last month.

Kade was fatally struck in the head. His favorite cousin, Jenna, was shot six times. She missed her younger cousins services while she continues to recover in the hospital.

Eight-year-old Kylie in the back seat was unharmed.

“He was a star and delighted to everyone. Wherever the child went a light of love, joy and happiness was left behind,” she read during Wednesday’s services.

Kade, nicknamed Kadey by classmates, was a 7th grader at the Brooklyn Science and Engineering Academy.

Students and teachers embraced one another as principal Angela DeFilippis memorialized Kade as young boy who could out-smile anyone.

"His story is not his death, it's his life," DeFilippis said. "From his classmates Kade is Kadey. He is playing football, hanging out with friends playing Roblox and Xbox. He is oxtail and curry goat and candy. He is ELA and social studies. He is his mother, his brothers and Jamaica. He is successful, determined to do well in school and take care of his family. He is Kade Ashton Tyler Lewin.”

The family opened up the funeral to the public, politicians and the press. Loved ones say they won’t find peace until Kade’s killer is off the streets.

“We are calling on you all who are listening and watching to please help us to put Kade to rest. If you know something, say something,” pleaded Angela Lewin.

The family is asking anyone with information about the shooting that killed Kade to call NYPD Crime Stoppers hotline at 1-800-577-8477.

There is now a $10,000 reward for anyone with information leading to an arrest.