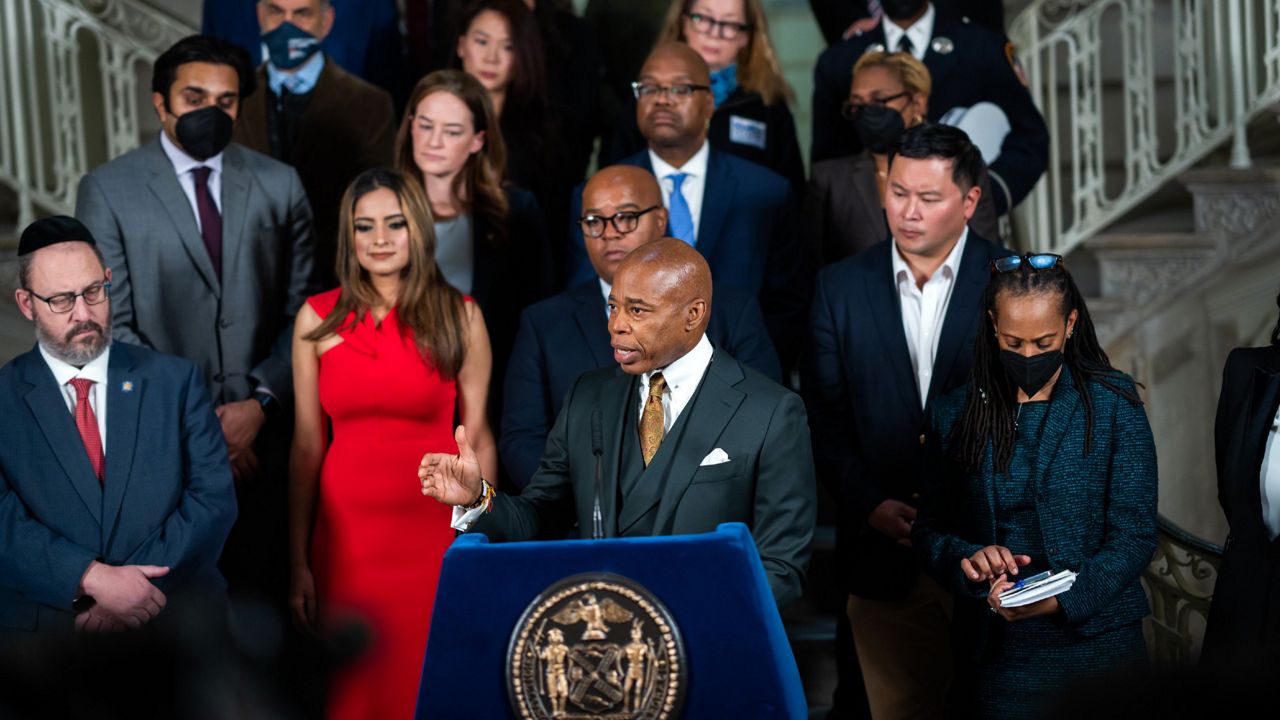 Many New Yorkers who are “in urgent need of treatment” refuse care when it is offered, Adams said at a news conference.

A directive Adams issued Tuesday will allow city-led “specialized intervention teams” to involuntarily hospitalize anyone who “appears to be mentally ill and displays an inability to meet basic living needs, even when no recent dangerous act has been observed.”

“A common misunderstanding persists that we cannot provide involuntary assistance unless the person is violent, suicidal or presenting a risk of imminent harm,” Adams said. “This myth must be put to rest.”

The mayor called for writing the directive, which he referred to as the “basic needs standard for involuntary intervention,” “explicitly into state law,” which, according to the mayor, “codifies court precedent” and helps make it “widely understood.”

Adams said the city will continue to “do all we can to persuade those in need of help to accept services voluntarily. But we will not abandon them. Those efforts cannot overcome the person’s unawareness of their own illness.”

The new directive provides a “step-by-step process” for FDNY EMS workers, the NYPD and Department of Health and Mental Hygiene “mobile crisis teams” to “involuntarily transport” a person experiencing a mental health crisis to a hospital for evaluation.

The mayor said mobile crisis teams and police officers will receive “enhanced training” on how to “intervene in situations where an individual appears to be suffering from mental illness,” as well as have an “in-depth discussion of what ‘inability to meet basic needs’ means,” where additional options will be provided to authorities before resorting to involuntary removal.

A new phone line with an option for video calling, staffed by NYC Health + Hospitals clinicians, will be available to provide guidance for police officers who encounter New Yorkers who are in “psychiatric crisis,” Adams said. He added that “a special cadre of clinicians” will be paired with NYPD officers that will “have the training, expertise and sensitivity” to “safely” transport mentally ill New Yorkers to hospitals.

“Those suffering from severe mental illness have more than a right to exist or survive. They have a right to health care, housing, and treatment. A right to dignity and respect. A right to safety and security. And above all, a right to hope. Hope for treatment, community, and healing. Hope that their future will be safe and that their illness can be manage,” Adams said. “But that hope starts with a spark of engagement on our part, followed by a strong and supportive program of help and housing.”

“We owe our brothers and sisters that much. And, in helping them, we will also be protecting the rights of every New Yorker to live, work, thrive, and be safe,” he added.

The announcement was met with criticism from some advocates. In a statement, Jacquelyn Simone, policy director for the Coalition for the Homeless said, “Rather than further involving police in mental health responses and urging City workers to involuntarily transport more people to hospitals, the administration should focus on expanding access to voluntary inpatient and outpatient psychiatric care, offering individual hotel rooms to all unsheltered people, and cutting through red tape that has left far too many permanent supportive housing units sitting vacant.”