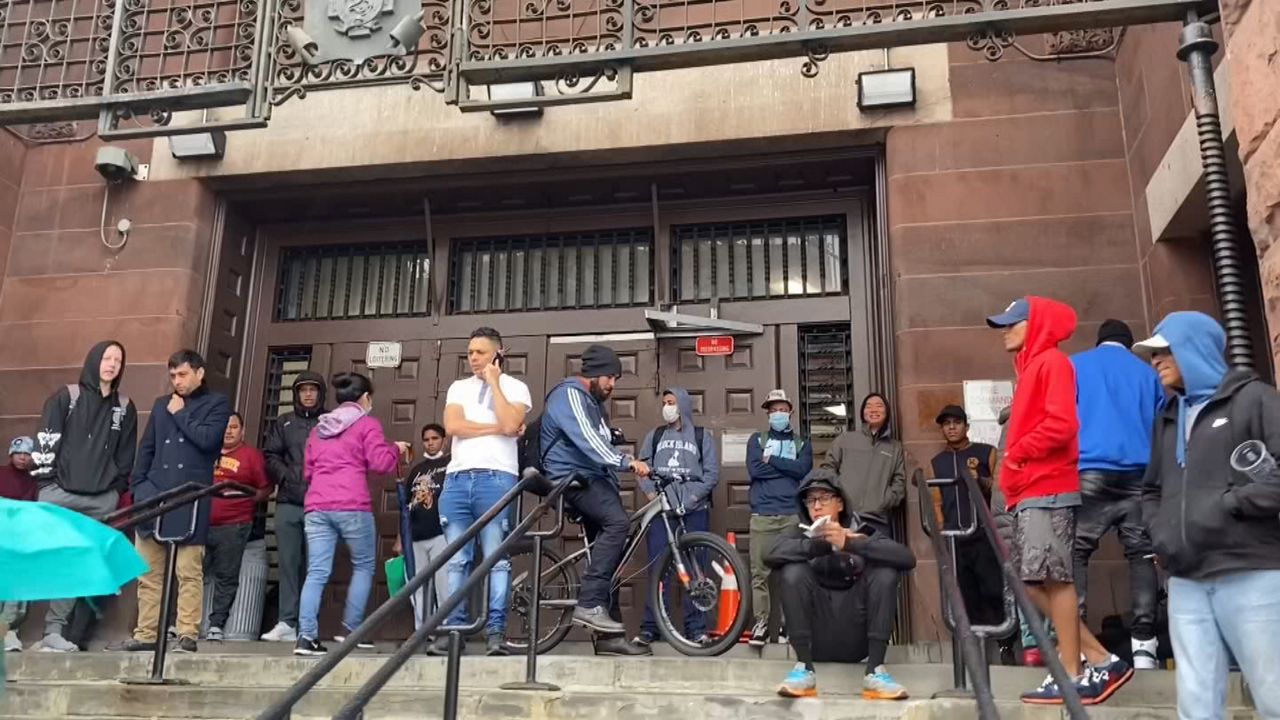 As the rain poured down Saturday in Brooklyn, Niurka Melendez walked toward her final destination after a two-hour train ride.

She came to the Atlantic Armory Shelter, where dozens of people are waiting outside.

“I am going to find out if there are more Venezuelans over there because I can feel that they are,” she said, before walking off.

It didn’t take Melendez long to find out some of their stories, as she started speaking Spanish.

The men she met are among the thousands who have been bused from Texas to New York City, after crossing the U.S.-Mexico border. They are seeking asylum from Venezuela.

“We have an organization and we are going to offer information for all of you,” she said to several in the group, intently listening.

Melendez is the co-founder of the nonprofit organization called Venezuelans and Immigrants Aid, or VIA for short.

“Our mission is to give information,” she said.

In just a few minutes outside this shelter, she said she found a big problem.

“Did you apply for asylum,” she asked one man in Spanish.

“They don’t give us any help,” another interjected in Spanish.

Melendez walked up to another person standing outside.

“You apply for asylum,” she asked.

“No,” he said, before adding that he is applying for New York City’s ID card.

Melendez responded that the ID card is not the same as applying for asylum.

“How many are there? Thirty people outside. None of them have applied for asylum yet,” she said, looking around.

She said there is a serious information gap because many migrants believe that saying they are seeking asylum to immigration authorities is all they have to do to actually apply.

That’s not how it works.

Without applying for asylum, the migrants cannot apply for work authorization or a temporary social security card, according to immigration lawyers. These steps are necessary for many job and housing opportunities for them.

As a result, that’s why many turn to the only place they can: the shelter system. And, for a while, they tend to be stuck there.

“They already live here in this shelter in Brooklyn,” Melendez explained to NY, pointing to everyone she met outside the Atlantic Armory Shelter.

Melendez and her team came to this shelter for an information session to educate residents.

They offer free consultations with a lawyer about asylum cases, a psychologist for trauma, and weekly English classes. There are community events, clothing drives and even sometimes Venezuelan meals they cook to give people a taste of food from their home country.

She said everything they do is to help the migrants start new lives here.

Melendez said she knows firsthand the importance of this work. She said she had to learn English on her own and figure out the asylum process was challenging for her family.

Seven years ago, she fled Venezuela with her family.

She owned a marketing company in Venezuela and said speaking out against the government put her family in potential danger. So they came to the U.S. and applied for political asylum.

She said her son was six years old when he got here. Now he’s a teenager — and more of a New Yorker than anything else.

“Our friends, who are local people they say he is from here. He is a New Yorker. A real New Yorker,” she said with a smile.

Even though Melendez has not had an initial hearing for her asylum case, she applied for the status. That made her eligible to apply for work authorization.

With that and her temporary social security card, she has an apartment in Harlem and works in information technology.

Menendez is finding her way and hopes to help others.

Her phone is flooded with text messages. Every person specifies they are Venezuelans seeking asylum after crossing the southern border.

Her days are at least 12 to 14 hours long between her job and running VIA. It’s because she said this work is important to help these Venezuelans on their path to finding a new life.

All the while, she continues to wait and hope to secure her own future here in New York City.