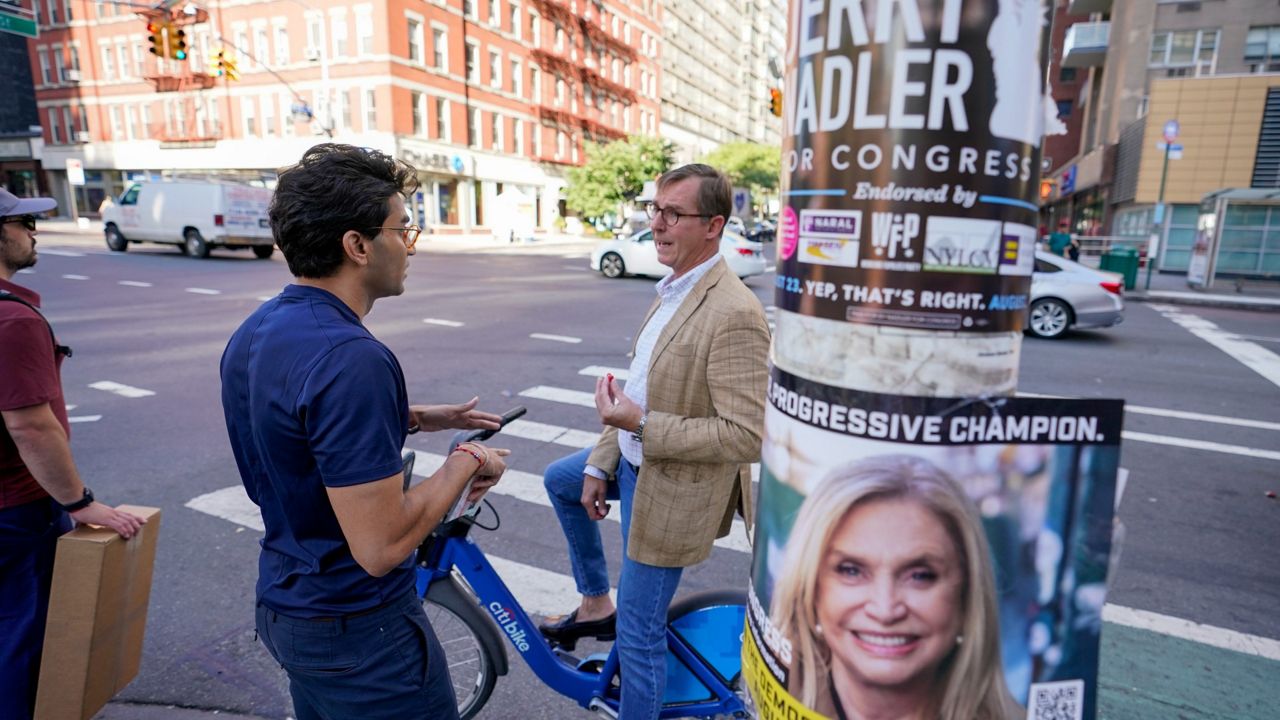 Posters for Rep. Carolyn Maloney and Rep. Jerry Nadler hang on a lamp post as Attorney Suraj Patel, left, speaks to a voter while campaigning on the Upper East Side neighborhood of Manhattan, Tuesday, Aug. 16, 2022. Patel is running against Rep. Carolyn Maloney and Rep. Jerry Nadler in New York's 12th Congressional District Democratic primary which will be held on Tuesday, Aug. 23. (AP Photo/Mary Altaffer)

There are a few days left until the August primary and candidates in the 12th Congressional District race are kicking their get out the vote campaigns into high gear.

This follows a new poll by PIX11, Emerson College and The Hill that showed Rep. Jerry Nadler significantly ahead of his opponents Rep. Carolyn Maloney and challenger Suraj Patel.

Patel greeted voters Friday on the Upper East Side and, once again, pitched himself as a newer, more energized choice compared to his septuagenarian opponents.

“Anyone who has a brain, who is out here, knows that the energy, the excitement and the momentum is for change,” Patel said.

“We’re the only campaign presenting a plan for the next decade. Presenting the fact that the status quo has failed for New York,” he added.

The 38-year-old lawyer has made ageism a crux of his campaign — calling on voters to oust two established Democrats who have served in Congress for three decades.

Meanwhile, Maloney crisscrossed the district, starting on the Upper East Side and then moving to Hell’s Kitchen on the west side to remind voters she has a record of getting stuff done.

She also highlighted the need to have women representation in the wake of the Supreme Court’s abortion ruling.

“I built the Second Avenue subway and I will build his damn rail freight tunnel that he hasn’t built if elected,” Maloney said.

“We need strong women with experience, who know what they’re doing to go back to Congress and reverse these really dangerous, extreme Supreme Court decisions,” she continued.

Nadler stumped on his home turf, talking to voters on the Upper West Side, setting himself apart from the other incumbent in the race.

Nadler pointed to a difference in voting record between him and Maloney and is making sure every vote counts.

“The only vote that counts is on Tuesday or people who voted already… So I never take it for granted,” he said.

The candidates plan to meet and talk to voters throughout the weekend into Primary day, Tuesday, Aug. 23.