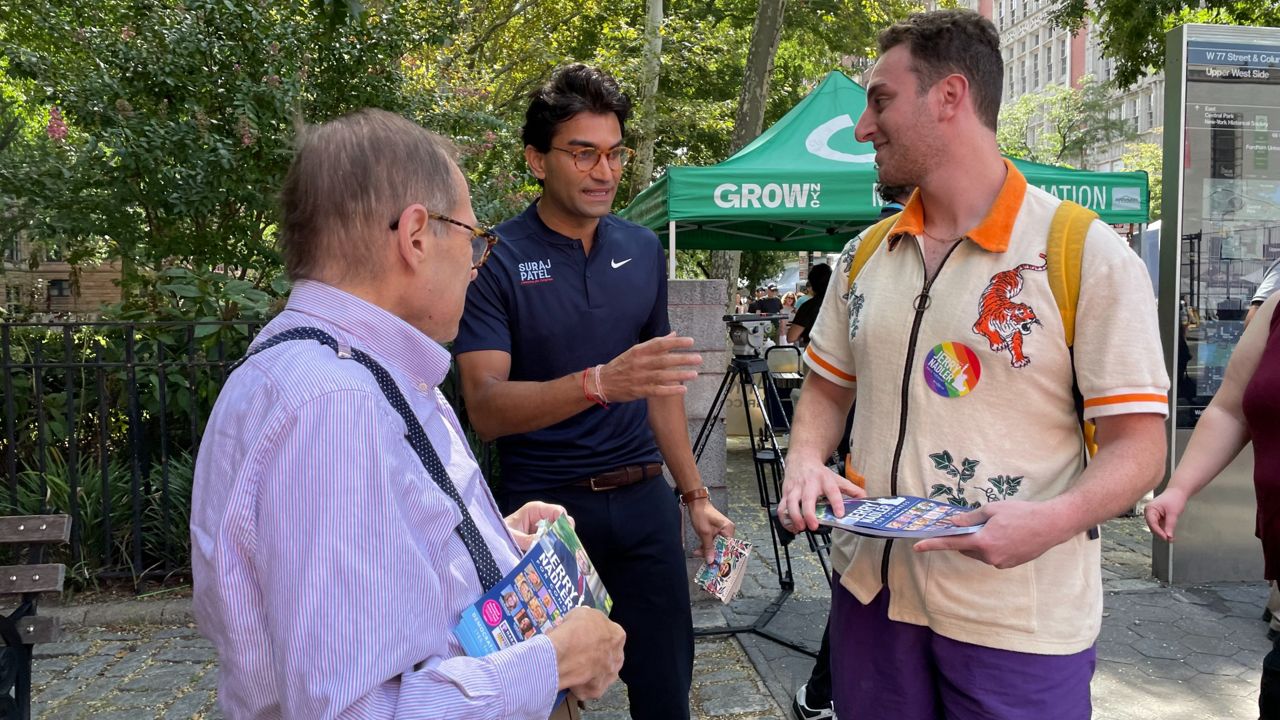 Rep. Jerry Nadler and Suraj Patel making their final pitches to a voter on the second day of early voting for the August primary. (NY1 Photo/Courtney Gross)

Amidst the heirloom tomatoes and corn, a call was overhead the bustle.

“Say hello to Congressman Nadler, endorsed by the New York Times,” it rang. The longtime congressman on the Upper West Side showed off his new slogan.

On Sunday, Rep. Jerry Nadler was campaigning outside of a greenmarket in the neighborhood fresh off receiving the New York Times’ endorsement.

“I think it will make a difference. I think it will help,” he told NY1. “I think we’re in good shape in any event. People today, really people, are more open to saying, ‘I’m with you.’”

It’s a boost for his campaign since he’s locked in a tough fight against fellow incumbent Rep. Carolyn Maloney from the Upper East Side and Suraj Patel, who is trying to unseat them both.

“What we are finding in this race that is so unique is we’re persuading,” Patel, was campaigning on the same corner as Nadler, said. “Ever since that first NY1 debate, we are seeing a takeoff.”

Nadler and the other candidates running for Congress and the state Senate campaigned as early voting got underway on Saturday.

According to the city Board of Elections, a total of 17,260 people voted over the weekend.

Because of redistricting, Maloney and Nadler are now competing in the 12th Congressional District, which covers the Upper East and Upper West Side neighborhoods.

Maloney had a get out the vote rally on her home turf, the Upper East Side. She demanded her opponents commit to serving a full term, which comprises two years, if elected and sent to Washington, D.C.

“I will be in the trenches every single day, every single day for two years working to make the Democratic Party stronger and working for my district, and I ask the same pledge from my opponents,” she said.

Both opponents said they would serve the full term.

Meanwhile, in Brooklyn, a dozen candidates are vying for the 10th Congressional District, which covers Lower Manhattan and a swath of Southern Brooklyn.

“I think it’s real validation of the message that we have been conveying to voters that right now the threats to our democracy, the threats to our national security are graver than they’ve ever been,” Goldman said while campaigning Sunday.

Another candidate in the crowded race, Assemblywoman Yuh-Line Niou, hopes her progressive credentials will win the day.

“We really need progressive leadership here in one of the most progressive communities in the state,” she said. “I think it’s really important we have that kind of representation and diverse representation makes for good problem solving.”

Early voting will continue through Aug. 21 and Primary Day is Tuesday, Aug. 23.