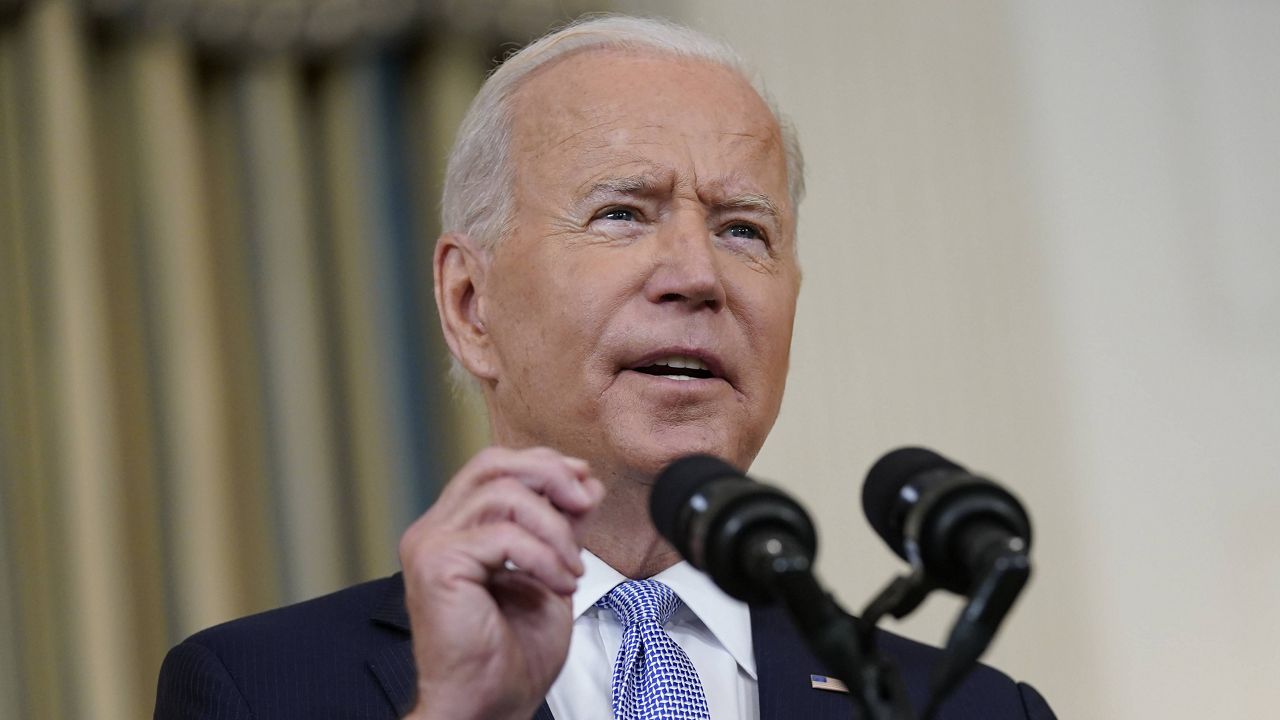 Biden, Democrats dig in to strike deal on economic agenda

Pressure mounting but with signs of progress, President Joe Biden will hunker down at the White House to try to strike a deal and win over two holdout Democratic senators whose support is needed for his potentially historic $3.5 trillion government overhaul.


With Republicans solidly opposed and no Democratic votes to spare, Biden canceled a Wednesday trip to Chicago that was to focus on COVID-19 vaccinations so he could dig in for another day of intense negotiations with lawmakers ahead of crucial votes.

The stakes are as high as ever as Biden and his party try to accomplish a giant legislative lift, promising a vast rewrite of the nation’s balance sheet with an oh-so-slim majority in Congress. His idea is to essentially raise taxes on corporations and the wealthy and use that money to expand government health care, education and other programs — an impact that would be felt across countless American lives.

In one sign of trouble ahead, House Speaker Nancy Pelosi suggested Wednesday that she might delay an expected vote Thursday on a related $1 trillion public works measure that centrist senators want but that progressives are threatening to defeat unless there’s movement on Biden’s broader package.

It’s a pressure point on the senators and other centrist lawmakers to strike an agreement with Biden.

“We take it one step at a time,” said Pelosi, D-Calif., to reporters at the Capitol.

“I want it to pass,” Pelosi said of the $1 trillion infrastructure bill. “So what we wanted to do is to pass tomorrow, and anything that strengthens the hand of a speaker, helps us.”

Biden has long maintained that he wants to pass both the infrastructure deal and his larger package at the same time, but the White House on Wednesday said the president trusts Pelosi’s political judgement.

“The president trusts the speaker and her assessment of what her caucus needs to win this vote,” White House press secretary Jen Psaki told reporters at an afternoon briefing. “Our objective here is winning two votes, getting these two pieces of important legislation across the finish line, because we know the impact they’ll have on the American people.”

The president is working in “lockstep” with Pelosi in order to secure the needed votes, Psaki added.

With Biden and his party reaching at the same time for what would be a signature policy accomplishment, there is a strong sense that progress is being made, said an administration official who requested anonymity to discuss the private talks.

All eyes are on Sens. Joe Manchin of West Virginia and Kyrsten Sinema of Arizona, who say the price tag for Biden’s plan is too big but are publicly quiet about a number they can live with.

The president met separately with the two centrist senators at the White House on Tuesday and Democrats are poised to trim the huge measure’s tax proposals and spending goals to meet the overall size they are demanding.

“Really good, honest, straightforward negotiations,” Manchin told reporters back at the Capitol after his White House meeting with Biden. He said he did not give the president a new topline figure.

But Manchin also expressed concern about the tax incentives and subsidies for renewables included in the $3.5 trillion package. When asked if the White House was committed to keeping those components, Psaki on Wednesday said the president is “obviously at a precarious and important time in these discussions,” and would not elaborate on specific details.

As if that wasn’t enough, Biden’s focus is gaining traction at the same time Congress courts a crisis. Republicans refuse to approve routine legislation to keep the government funded past Thursday’s fiscal yearend and raise the nation’s debt limit to avoid a dangerous default on borrowing. More votes are expected Wednesday and are likely to at least temporarily head off a catastrophe.

Taken together, it’s all putting the entire Biden agenda perilously closer to collapse, with consequences certain to shape his presidency and the lawmakers’ political futures.

Treasury Secretary Janet Yellen told Congress in a letter Tuesday that Oct. 18 is a critical date — the day the Treasury Department will likely exhaust all of its “extraordinary measures” being taken to avoid a default on the government’s obligations.

Yellen urged Congress to “protect the full faith and credit of the United States by acting as soon as possible” to either raise the debt limit or suspend it.

Faced with Republican opposition to linking the routine government funding with the debt limit vote, Democrats are separating the two, stripping out the more-heated debate over the debt limit for another day, closer to a separate October deadline.

The Senate is poised to vote swiftly to provide government funding to avoid a federal shutdown after the Sept. 30 fiscal year end, keeping operations flowing temporarily to Dec. 3. The House could quickly follow.

Senate Majority Leader Chuck Schumer, D-N.Y., said that Democrats will introduce a Continuing Resolution to fund the government through December, and they could take action on the measure "as early as today."

We’ll work to get it done.

Schumer said Wednesday that the Senate could approve it quickly and send to the House, so they can take action to get it to President Biden's desk ahead of the funding deadline to avert a shutdown.

The House is also preparing a possible vote to extend the debt limit through through Dec. 16, something Democrats are likely to support. But even if it is approved by the House, it’s unclear if it could pass the Senate in the face of GOP obstruction.

Schumer warned Wednesday that the Senate "cannot and will not" use the budget reconciliation process – the mechanism by which they do not need any Republican support to pass legislation – to raise the debt limit, saying it puts the chamber in "uncharted waters."

"This body cannot and will not go through a drawn-out and unpredictable process sought by the minority leader," Schumer said, in reference to Senate GOP leader Mitch McConnell of Kentucky, who has refused to take action on the debt limit and urged Democrats to go it alone.

"To do this through reconciliation requires ping-ponging separate bills back from the Senate and the House," Schumer explained, noting that any single Republican senator could delay the process: "Individual senators could move to delay and delay and delay."

Schumer said the move "is very risky and could very well lead us to default."

Utah Sen. Mitt Romney, a moderate Republican, disagreed with Schumer's assessment: "Of course there’s enough time to do it in reconciliation. It’s a process you can make more speedy by agreement, but even without speeding it up. it’s a couple of week process and it’s not until the 18th of October."

Tensions are flaring at the Capitol as the contours of Biden’s big agenda come into focus amid standoff over normally routine votes over government operations.

Leader McConnell grew testy with reporters when asked about Yellen’s warning that Congress must swiftly resolve the issue.

“Of course the debt ceiling has to be raised,” McConnell said, but insisted Democrats need to do it on their own.

Meanwhile, the behind-the-scenes action over the $3.5 trillion measure is testing Biden’s grip on his party, as he seeks a once-in-a-generation reworking of the nation’s tax priorities and spending goals.

With all Republicans opposed to the big bill, Democratic leaders can’t spare a single vote in the 50-50 Senate, relying on Vice President Kamala Harris to break a tie to pass the eventual package.

Physically holding up the bill of 2,000-plus pages, Republican Sen. John Barrasso of Wyoming warned it was nothing but “big government socialism.”

Biden insists the price tag actually will be zero because the expansion of government programs would be largely paid for with higher taxes on corporations and the wealthy — businesses earning more than $5 million a year, and individuals earning more than $400,000 a year, or $450,000 for couples.

To lower the price tag and win over centrist Democrats, it’s not necessary that any specific programs be get axed, those familiar with the process have said. Rather, lawmakers are eyeing ways to adjust the scope and duration of some of Biden’s proposals.

Still, Rep. Pramila Jayapal, D-Wash., the chair of the Congressional Progressive Caucus, said they have the votes to derail the other bill unless it comes with Biden’s broader one — tacit pressure on the holdouts to arrive at a deal.

"The Progressive Caucus wants to have an understanding of the path forward on the reconciliation package. They have stated that publicly," Psaki said of Jayapal's comments on Wednesday, later adding: "They want to know that there are going is going to be a support for that package moving forward in the Senate, and that it will get passed."